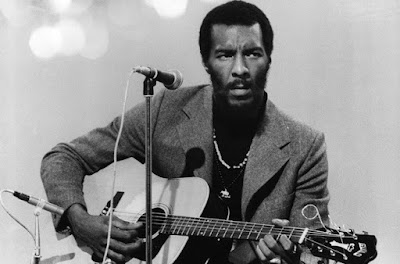 Album Review of:
‘SOMETHING ELSE AGAIN’
by RICHIE HAVENS
(2018, FLOATING WORLD RECORDS)
www.floatingworldrecords.co.uk 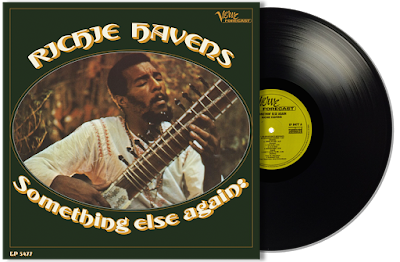 He was the Greenwich Village beatnik reading the kind of Beat Generation poetry he strips across the rear album-sleeve. He was the Folkie who played open ‘E’ thumb-chord acoustic guitar with minimalist highly percussive rawness. He took songs by the best contemporary writers, his fluid baritone translating them into his own compelling urgency, while Jeremy & The Satyrs cook dense and busy grooves around him. Issued on prestigious Verve Forecast in 1968, this second album followed ‘Mixed Bag’ (1966) into the lower rungs of both the Pop and Jazz charts, just before he did ‘Woodstock’. Six are Havens originals, three of them written with producer John Court. Loose jerky rhythms, pattering bongos, darting flute, clavinet and smashing gong on “No Opportunity Necessary” – later covered by Yes. “The Klan” is a stark anti-racist weapon, written under alias by Alan Arkin of ‘Catch-22’ and the ‘Pentagon Papers’. Havens even anticipates World Music with the 7:27-minute raga-Rock title-track, which must have been soundtrack for every crash-pad and psychedelic dungeon, even though the stoned bliss liner photos of him wielding the sitar look more of their time than timeless. The shamanistic trance-dance “Run, Shaker Life” proves the devil doesn’t have all the best tunes, because Havens had several of his own.
Published in:
‘R’N’R: ROCK ‘N’ REEL Vol.2 no.72 (Nov-Dec)’
(UK – November 2018) 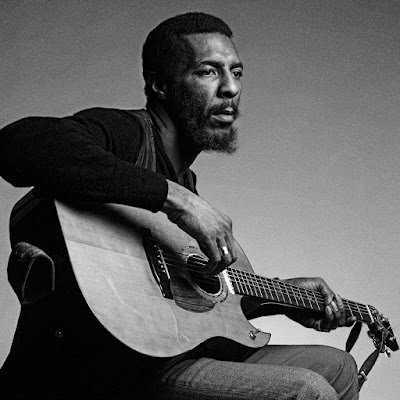 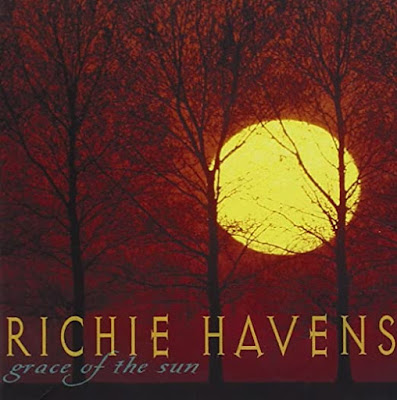 There are artists whose careers dazzle with a phantasmagoria of change, reinvention, style-switches and startling evolutions. There are others who first define the exact limits of their terrain, then stay within them. Although there was a recent collaboration with Groove Armada, suffice to say that Richard P Havens (born 1941) is not one of the former. A Brooklyn street-kid from the Bedford-Stuyvesant area, steeped in Gospel and Doo-Wop, he developed his distinctive style way back in the beatnik hootenanny Greenwich Village coffee-houses, as early as the early sixties folk scene. That insistent acoustic rhythm played on that E-chord open-tuned guitar, that intense, gruff, yet surprisingly interpretive voice which Andy Gill calls a ‘gentle fervour’. His grizzled beard, sandals and beads, investing a powerful, near guru-like presence.
He’s there, naturally, at ‘Woodstock’. A black folkie in a white genre. Not soul enough for the black market. Something between. An underground figure catching the fragile zeitgeist to perfection as he improvises “Motherless Child” into an impassioned ‘Freedom’. ‘Progressive Folk Blues’ they called it. Perhaps it could now rate as early ‘World Music’ (he uses Turkish violin, bouzouki, and electric sitar here), or some kind of Jose Feliciano fortunate misfit? He’s also better known as an interpreter of other’s songs that as a writer in his own right, having covered Jackson Browne, Marty Balin, Bob Lind, John Martyn and even Pink Floyd (“On The Turning Away”). Whatever, he here revisits himself – most tellingly, through “Woodstock” itself via Joni Mitchell’s oft-recorded anthem, and yet another Dylan – this time it’s “All Along The Watchtower”. But then again, they go back a long way, Havens was there at the 1965 Newport Festival where Dylan first ‘went electric’.
He goes on to select another Jack Hammer, and also an early Fred Neil song which I’d never heard before, yet “Red Flowers” is a tortured Cold War anti-nukes relic (‘red were the flowers, growing out of the ashes of war’) charged with all the contemporary relevance of the Cuba Crisis. “By The Grace Of The Sun” with its tabla percussion is one of six new Havens’ originals (including instrumental “Dusk”), his highest ratio of own-compositions since 1999’s ‘Time’ which had seven. And this is something like his twenty-seventh album. For some, a melodic irrelevance. But if you liked it then you just might like it now.
Published in:
‘KEYSTONE no.6’
(UK – December 2004) 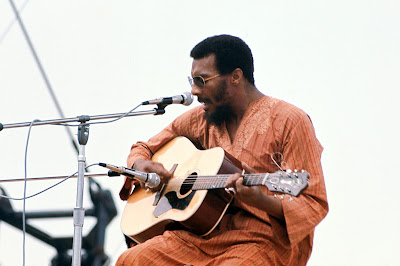 Posted by Andrew Darlington at 19:10