Gig Review of:
MARION & THE BLUETONES
at the ‘Heineken Festival’, Leeds 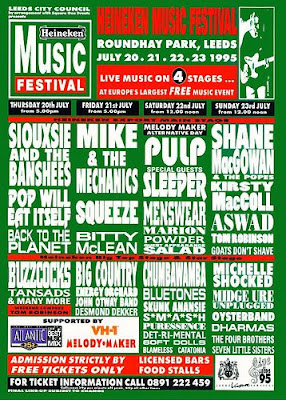 What’s so great about living in the mid-nineties? Let me count the ways, (a) this four-day nation of Mad Togs & Englishmen, (b) kicking through an autumn-leaves sediment of crushed lager cans, while (c) submerging in music as familiar and comforting as pools of warm beer. Rock without originality might be an empty experience. But as empty experiences go, it’s still pretty damn good. Take a Bluetonic. Watch Mark Morris do his neat little shuffling dance as the Bluetones bring their lilting “Are You Blue Or Are You Blind” all the way from Hounslow. It’s got all the distinguishing features of Now-Indie without any startlingly different ingredients. But hey, life’s complicated enough. There’s always Sixty-Foot Dolls dragging an energetic mess of neo-Mod Grunge from Newport, Gwent, a power-trio ‘White-Knuckle Ride’, they do a biting “Stay” laced with a Pop-catchy chorus, then close with the Beatles amped-up “Everybody’s Got Something To Hide (Except Me And My Monkey)”.
Originality? Well – there’s Cecil who open with some taped psychedelic yodelling and close with Vera Lynn, even if what happens between intro and outro is less memorable. While at one point petulant Menswear lead Johnny Dean announces ‘I’m not gonna be satisfied until I can see you STEAM!,’ although it’s left to Marion’s leather terrorist-chic to raise the temperature sufficiently close to meltdown for that to happen. Today, they’re the choice of a New Generation. The first intimations of their status come with the ‘Pretty Vacant’ play-in to “Time”, framed by their symmetry of inward-pointing guitars. Jaime Harding sits on the monitors in all-over black, leaning out into the audience to banter ‘whoever it is throwing cans at the band… make sure you fucking do it right, and actually HIT us!!!’ They’ve largely gone beyond the new-Smiths tag enforced by their ex-Morrissey support spot, and despite the open-air sound they’re tighter than tight on new song “Wait”. Again, originality might not be their strong point. But here at Leeds, it seems even the winner fakes all, and unlike every other A.N. Other band who become increasingly average as the day’s turn-over progresses, Marion power-up the ingredients into a toxic concoction that rollerblades effortlessly across the opposition. There’s an undeniably Morrissey inflection after the harmonica bursts of “Asleep”, but there’s also something oddly like a Robert Plant strangled wail during “My Children”, but then “It Stopped Dancing” is a new drug altogether, out on its own in a solid metal wall of guitar noise.
That’s what’s so great about living in the mid-nineties. It might not be THAT new. But it’s here. And it’s happening now. 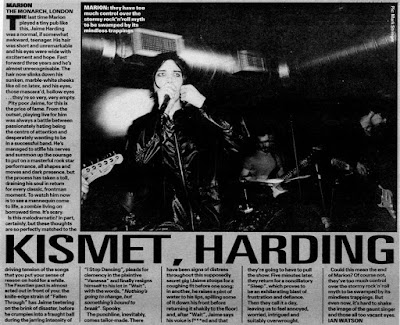