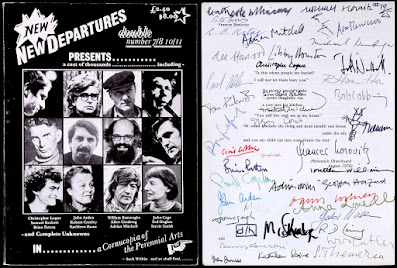 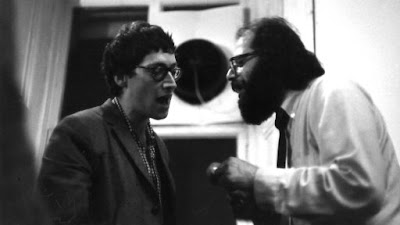 Michael Horovitz is a cerebral Charles Atlas. Crawl along to this latest edition of his irregularly published journal jaded, bored, slagged off, and it will blow the dust from your mental entrails, refurbish your silted-up poetic perceptions, reaffirm your belief in sunlight, tone up flaccid limp imaginations, make you dance, sing and anything, leave you dazed and ecstatically confused, punch-drunk on words that hang in your head like fish-bones in your throat. It’s addictive, it gets you high on life – sell your stash, unplug your iron-lung, pawn your ‘angel-headed-hipster’ Union Card – but get it.
Everyone you would expect to find is here, the excellent Thom Gunn trading his ‘Black Jacket’ for a bathrobe in a tense “The Bath-House”, Adrian Mitchell liberates a page or two with his “A Tourists Guide To England” – previously in Nigel Gray’s ‘Green And Pleasant Land’ collection, Pete Brown – the great Battered Ornament of our time renews his not-forgotten association as an original live New Departure with three most welcome new poems, a good Tom McGrath (‘for seventeen years all I ever wanted to do was have it/ now I have had it god knows how many times, and all I want to do is have it again’), a clutch of new Allen Ginsberg, one called “Yes, It’s Hopeless” as pessimistic as the crash of doom on a hydrogen jukebox, some odd and idiosyncratic Ivor Cutler (‘I found my son in the lavatory/ having intercourse with a meningococcus/ ‘what’s wrong with your sister son?’ I muttered’), Lee Harwood comments effectively on a “1930s Photo” of a Dustbowl shotgun shack, plus four hangers-on from the Mersey Scene, Grimms Brian Patten writing about success and Roger McGough about a skinhead, Spike Hawkins about a “Whitehall Blunder” and Adrian Henri confirming an impression I gained at a last year’s reading that he’s attempting to upmarket his work with a long ambitious “Metropolis” and a lighter “Scenes From Science Fiction” penned in conjunction with PJ (Philip Jose?) Farmer. There’s a good Gay-junkie-urine-and-excrement poem from Bill Burroughs, while RD Laing (‘…the flowers I cannot name/ grow all the same…’), Samuel Beckett, Greg Corso (‘truth is eternity/ sojourning in time’) and a John Cage word-game add to the superstar ratings. 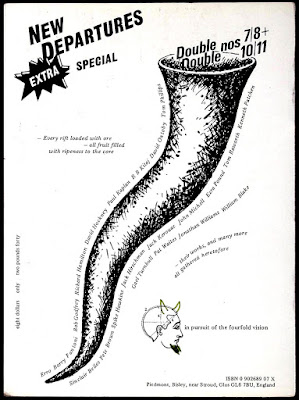 There are visuals and concretes – “Kyoto To Tokyo” from Bob Cobbing, David Hockney making a ‘Bigger Splash’ with a portrait of Yves Marie reading, impressions of Picasso plus simplified faces, pictures and cartoons by Barry Fantoni and a beautifully bizarre strip by Alison Swan, all spliced around conversational poems, calm nature poems, humorous poems, political poems (a bit about society’s yobs and misfits enlisting by John Arden, a routine pacifist poem by Christopher Logue, a better one about the Kent State University killings by Lyn Lifshin), mystic poems and mandalas, a couple of Jazz poems by Calvin Hernton – one for Billie Holiday, one for Eric Dolphy, lengthy almost-prose and visuals recalling his ‘IT’/‘Styng’ underground press contributions from Jeff Nuttall, brilliantly imagined SF-tinged poems – “Telegram From San Francisco” by Sinclair Beiles and Annie Rooney about burial at sea because land is too scarce, with mourners wearing frogman suits, and “I Dream Of Life” from Ron Geesin fresh from his work with Pink Floyd and movie soundtracks, likening five naked babies to ‘upturned tortoises’, scientifically modified into nuclear bombs.
Sadly there’s also death here too, poetry by the suicided Mark Hyatt (‘…crossing that “Border Line” was to be his apotheosis of the ‘Romantic Agony’’ according to Horovitz), Stevie Smith is seen reading at the 1966 Albert Hall Concert, then not reading at the Palais Voor Schoone Hunste Brussels 1967, Charles Olson is tributed with an excerpt from a poem by Jonathan Williams, examples of the work of Mal Dean (‘New Worlds’, ‘Melody Maker’, ‘IT: International Times’ and Pete Brown album-sleeve illustrator) are set beside the poems of his wife Libby Houston, and – of course, there is Jack Kerouac who ‘kissed the leper of prose – and miraculously cured it’ according to Horovitz. Each writer is discussed and anecdotally remembered in the editor’s long ‘Afterwords’-type introductory diatribe. Later on Patrick Waites writes ‘what’s all this talk of dying?/ poets were made to sing’ – and this bulbous two-hundred-plus-page anthology sings in quadraphonic sound and glorious widescreen monochrome. ‘Every rift loaded with ore, all fruit filled with ripeness to the core’ as the cover proclaims. To extend my abysmal introductory metaphor, Michael Horovitz – he of the magic kazoo, raises this unique collection from the earth on his apocalyptical shoulders into a firmament of typewritten constellations. Originally intended as a tenth anniversary issue, delays have meant it becoming the fifteenth birthday manifestation of the series, becoming in the process the most exciting poetry collection I’ve read since Horovitz’s previous milestone – ‘The Children Of Albion’ (Penguin Books, 1969). If the revolution is not to be televised, it could be argued that it has already been put into print.
Published in:
‘HAT no.2’ (UK – October 1976)
‘GARGOYLE no.6’ (USA – August 1977) 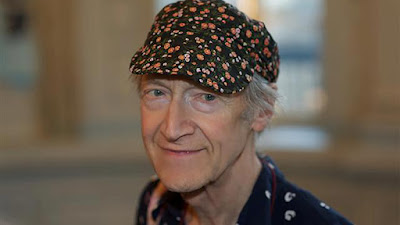 Posted by Andrew Darlington at 18:12