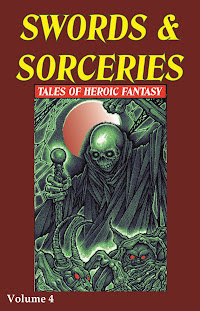 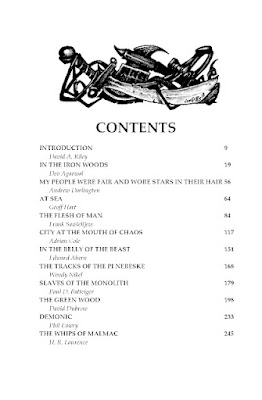 Whither goest heroic fantasy?
Whither goest heroic fantasy in this twenty-first century of CGI movie epics that conjure anything your wildest imaginings can conceive? In a time of Harry Potter and ‘Stranger Things’. How do words on paper compete with Xbox High Fantasy Games and interactive computer programs that can build and destroy entire bespoke civilisations?
The success of Parallel Universe Publications’ ongoing ‘Swords & Sorceries’ series – now up to its fourth excellent edition, suggests the sub-genre is enjoying robust health! For a genre that began with Robert E Howard and Clark Ashton Smith, embracing Fritz Leiber and Michael Moorcock, boundaried by the fairly rigid defining characteristics of barbarians, blades, spells, dark forests, monstrous beasts and supernatural powers, it’s proved remarkably resilient in the face of readership changes. Despite the way people consume and enjoy their fantasies in e-book, download or PDF formats, there’s a reassuring sense of solidity to this thick beautifully produced paperback, illuminated by the cover and title-page art of Jim Pitts – who catches its gruesome weirdness to perfection (Jim has his own second hardcover collection – ‘The Ever More Fantastical Art Of Jim Pitts’, available from the same publisher). 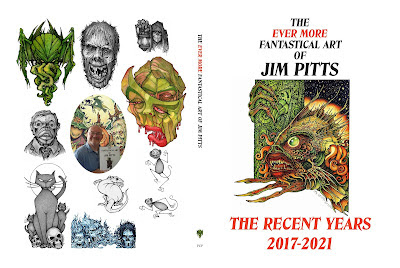 Here there be eleven new myth-making tales fused together into a single unstoppable list, that runs the gamut of change and continuity, just as creatures of trackless enchanted woods are distorted into new ecologies of dread and wonder. Here we are invited to venture again, back into make-believe legendary times, from horizon to horizon, with no pause for apology. First, I love Wendy Nikel’s “The Tracks Of The Pi Nereske”. There was Catherine ‘CL’ Moore and the wonderful Leigh Brackett, but the feminist spin still adds a rejuvenating slant to the more jaded aspects of heroic fantasy, and this is a standout example in which Huntress Sashura takes Nika on as her new apprentice, and teaches her how to wipe her bloodied blade clean on the snow. There’s a back-story about how the Old Creatures were freed from their Urn of Imprisonment to wreak terror upon the world, yet Wendy fleshes it out with real characters and tactile settings of ice and forest.
In the following tale, Brona fights as a female member of the warrior contingent raised to resist the “Slaves Of The Monolith” – although it was intuitively written by Paul D Batteiger. The monolith, of black stone which exerts its baleful corrupting influence on people, devolving them into beasts, is likely an ancient meteorite or embedded asteroid, it could be argued that the deus ex machina dénouement in which the monolith is reburied is a tad convenient, yet again Paul’s fluent prose-style lifts the story into an atmospheric journey into the heart of darkness. Geoff Hart introduces an effective gender-switching device into his “At Sea”. In the first volume of ‘Swords & Sorceries’ he used the technique in affectionate homage to Fritz Leiber’s ‘Fafhrd & The Grey Mouser’ tales, now – with “Chain Of Command”, he inflicts the same sex-change magic on Asterix & Obelix, into a swashbuckling Freya and Mouse in a rollicking escapade against a sorcery-empowered pirate crew.

As the back-cover blurb announces, these are ‘tales of swords and sorceries, of warlocks and warriors, of demons and demigods,’ with many of them set in a primal fantasy medievalism typified by the Hyborian Age. Edward Ahern adds a time-suspending sense of mystical psychic energy to his “In The Belly Of The Beast”. Until David Dubrow shifts his “The Green Wood” closer into historical time, with Byzantine forces resisting border encroachments by barbaric Nervii tribal Gauls. The familiar idea of marrying the emperor’s daughter off to secure political alliance is thrown out of kilter by a Magus and is further complicated by the vile supernatural Beremoch infestation, providing a macabre edge. Dev Agarwal’s “In The Iron Woods” is a sequel to his story that appeared in no.2, which introduced Baron Simeon, the “Stone Snake” – the first knight of Emperor Flavius. Although there are pagan gods and druids, this is a largely visceral military story of Scythians massacring a Lamian army on the dark forest borders of empire. 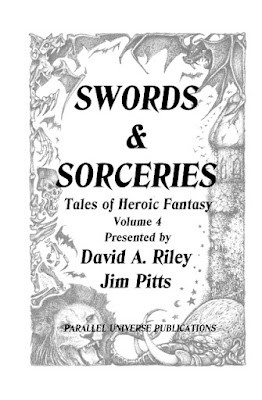 HR Laurence returns the setting to a mythic antiquity with the plot twists and unexpected turn-arounds of his picaresque romp “The Whips Of Malmac”, in which Zivia the Cat, Queen of Thieves is seemingly betrayed to the decadent Zyrentian Governor by swordsman Heodric. Erotic threat is suggested, but is tastefully not quite delivered. Frank Sawielijew’s barbarian Thurzo seeks the assistance of wild-girl Oria who has a fondness for raw meat in “The Flesh Of Man”, together they venture into the Harpie-infested Karthan mountains seeking the heart of a dread-lizard which he hopes will cure his ailing father. With Oria, a repentant Harpie herself, they escape the topless pterodactyl-riding female warriors in an aerial pursuit that drips with blood and viscera. While Phil Emery has poet-warrior Zain adventuring in “Demonic”, tasting out words for the heroic epic he will compose in his head even while he’s demon-slaying – ‘baleful’ or ‘baneful’, ‘vomit’ or ‘venom’? It scans either way. Sword and poem, in a subtle and effective sophistication of the template.
Fantasy has something of the traditional fairy tale about it, subject to endless reinvention and reinterpretation. To American ‘Games Of Thrones’ viewers the lineage of monarchy, kings and princesses, has an exotic allure, which is lost among those of us living within the relics of such an archaic institution. Perhaps kings and queens should stay on the chessboard or in the fairy-tales where they belong? Adrian Cole doesn’t mess with anything as trivial. As the only writer to feature in all four volumes, he takes his Dark Man ‘The Voidal’ armed with his Sword of Shadows carried in its ebon scabbard, pell-mell through a tapestry of colliding narrative threads. Accompanied by his lover Scyllarza, they ride the grumbling organic ship Evergreed through a dazzling omniverse cornucopia of dimensional god-beings – facing the vast Gaping Dread, through the Crimson Gate to rescue Elfloq, the kidnapped familiar. The mind has seldom been as boggled! To confess an interest, my own story – “My People Were Fair And Wore Stars In Their Hair”, my second in the ‘Swords & Sorceries’ series, started out as a kind of ER Burroughs tale of ancient Mars, with necromantic overtones, but as always happens, it assumed its own momentum.
Whither goest heroic fantasy?
This is where it goeth. Into this fiend’s feast of diabolical delights from all points along the space-time curve. Read, and enjoy. 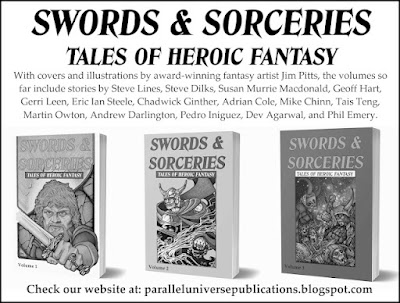 ‘SWORDS AND SORCERIES:
TALES OF HEROIC FANTASY Volume 4’
(ISBN 978-1-7398326-7-4)
with ‘Introduction’ by David A. Riley
‘In The Iron Woods’ by Dev Agarwal
‘My People Were Fair And Wore Stars In Their Hair’ by Andrew Darlington
‘At Sea’ by Geoff Hart
‘The Flesh Of Man’ by Frank Sawielijew
‘City At The Mouth Of Chaos’ by Adrian Cole
‘In The Belly Of The Beast’ by Edward Ahern
‘The Tracks Of The Pi Nereske’ by Wendy Nikel
‘Slaves Of The Monolith’ by Paul D Batteiger
‘The Green Wood’ by David Dubrow
‘Demonic’ by Phil Emery
‘The Whips Of Malmac’ by HR Laurence
cover and all interior artwork by Jim Pitts

Posted by Andrew Darlington at 13:25