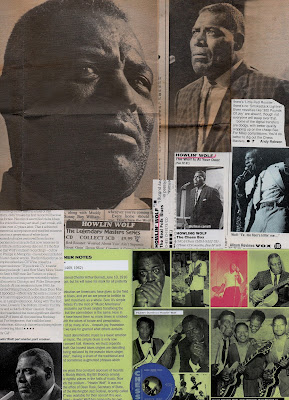 In the 1960s Electric Wolf was considered an overwhelming prospect. Now we get electric and digitally re-mastered Wolf to corrode your CD speakers, and it’s truly awesome. The Blues form is welded into our ears, realise it or no. It’s the charged air Rock breathes, with Howlin’ Wolf a huge black bullfrog of a man – 6ft 4ins, 300lbs of haunted howls and harsh resonant growls. ‘Oh-ohh Smokestack Lightnin’, Shinin’ just like gold, Oh, don’t you hear my cryin, Wooooo-ooooo, Wooooo-ooooo-ooooo, Wooooo’. No BB King slick or John Lee Hooker sly wit here, just granite tornados ripped from the bowels of Pluto dripping venom, gore and entrails. The Wolf can be terrifying.

Born Chester Burnett, 10 June 1910 in Sunflower County, Mississippi, he lived generations of Blues, learned his craft during the 1930s hard-travelling with Charlie Patton, Robert Johnson, and Sonny Boy Williamson II, first recorded in Memphis with Sam ‘Sun’ Philips and a youthful Ike Turner, roared through the Chess Golden Decade, to finally lope into the 1970s for Rolling Stone Records (originally COC 49101, 1971) in the overly respectful company of Bill Wyman, Ringo ‘Ritchie’ Starr, Steve Winwood and a tremulous Eric Clapton. Wolf left a pack of originals easily the equal of any Blues vocal meltdown anywhere, with a voice at once raucous, and fluid as gasoline.

“Smokestack Lightning” says it all, but there’s nineteen more titles on the Blue City CD, Willie Dixon’s lecherous “Back Door Man” – ‘…the men don’t know, but the little girls’ – and Jim Morrison, ‘understand’, the R&B showcase “Wang Dang Doodle” sucked appropriately onto MCA’s 1978 soundtrack album to the unrelenting urban ‘Blue Collar’ movie, to Wolfish originals “Howlin’ For My Baby”, “Moanin’ At Midnight” – its seminal version dating from August 1951, and the now-standard “Spoonful”. ‘The Real Folk Blues’ stark, austere and nerve-drawn, is a straight reissue of a Chess original, its twelve titles compiled from 1957-1966 sessions usually in the company of Wolf’s finest guitar sideman Hubert Sumlin. It encompasses his most aggressively lethal invective – “The Natchez Burning” illuminated by the Civil Rights race war, through to “Sitting On The Top Of The World”, “Three Hundred Pounds Of Joy”, and “Built For Comfort”.

Title duplication seems inevitable, with the second twenty-track anthology sharing “Red Rooster” and “Wang Dang Doodle” – but neolithic slabs of pure rusted sheet lightning like “Killing Floor”, “Highway 49”, “Ain’t Superstitious”, “Louise”, and the predatory “The Wolf Is At Your Door” make the ‘Howlin’ Wolf Collection’ as essential to the health of the planet as the ozone layer. The British Blues boom plundered or plagiarised the primitive sophistication of Wolf’s lycanthropic carcass from Manfred Mann to Cream, from the Rolling Stones to Little Feat. But the cross-bred ‘The London Sessions’ – a well-intentioned kickback with the Wolf retreading his catalogue, “Red Rooster”, “Do The Do” and the rest, in a ‘supergroup’ setting coerced by producer Norman Dayron – shows just how far they got it wrong. White sheep in Wolf’s clothing? Only Sumlin and the mighty Wolf himself invest the exercise with authentic dignity.

Chester Burnett died of a heart attack following brain surgery in Chicago, 10 January 1976. But the Wolf is still Howling… 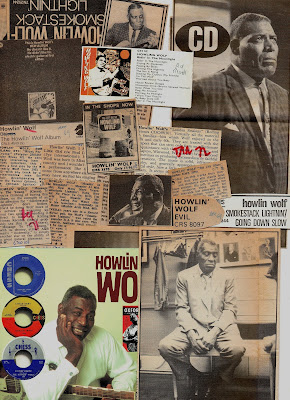 Posted by Andrew Darlington at 19:01