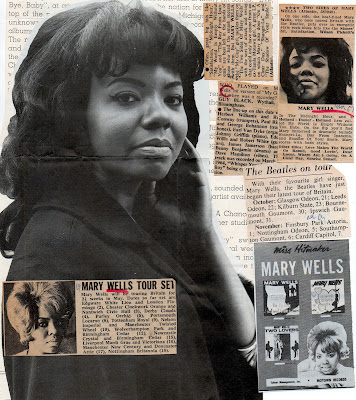 
Never one to waste an idea on one song when it’s rich enough for two, Smokey Robinson wrote “My Girl” and “My Guy” as a back-to-back matching set. The former subsequently resurfaced into chart awareness nudged by the tacky movie of the same name, and by the still sublime harmonies of the Temptations. Then “My Guy” began getting high-profile radio play too, due to Mary Wells’ untimely death from throat cancer.

Mary was the First Lady Of Motown – at least in the chronological sense. Her light fly-away voice may have lacked the fire of a Martha Reeves, or the aching desolation of a Supremes-era Diana Ross, but she predates them both. And if she was essentially a vehicle for other’s ambitions, arriving at her unique nexus in Pop history as much by chance as by excellence, then the honeyed seduction of her run of American hits still stands up to repeated play.

Intent on a song-writing career she’d initially taken her “Bye Bye Baby” to Berry Gordy Jrn hoping to interest Jackie Wilson in the song. But Gordy took note of the self-assured schoolgirl who’d walked into their regular auditions straight off the Detroit street, listened to her perform her song, and immediately signed her to an artist contract instead. Jackie Wilson’s loss became the Motown label’s fourth single release. Then “I Don’t Want To Take A Chance” b/w “I’m So Sorry”, her second record (catalogue no. Motown 1011), charted as high as ‘Billboard’ no.33 in August 1961. And the following year brought no less than three straight Top Ten hits – “The One Who Really Loves You” (no.8 in May 1962), “You Beat Me To The Punch” (no.9 in August), and the mildly risqué tough ‘n’ tender “Two Lovers” (no.7 in December). Starting out ‘I’ve got two lovers and I ain’t ashamed, two lovers and I love them both the same’, she explains how one is ‘sweet and kind’ while the other ‘treats me bad’, until the neat final verse resolution reveals they’re both split personalities of the same guy, her teasing vocal intonation running rings around its torn-between-two-lovers contradictions.

But close your eyes, listen, it could almost be Smokey himself singing “You Beat Me To The Punch” rather than him just using Mary’s voice as his instrument. Then listen to the razor-sharp handclap backing that will become a Motown production-line trademark. It’s all there in blueprint – the sound that will dominate, not only black music, but the sound of the sixties. Mary Wells’ silk-smooth soul, oozing taste and poignancy, was an essential part of bursting Motown through the Pop R&B crossover map. It was Mary Wells who scored those early vital breakthroughs. 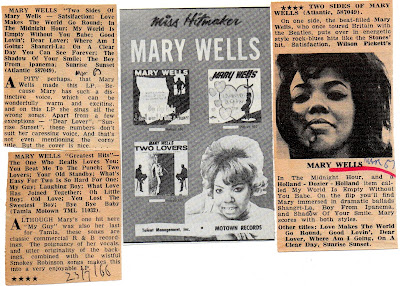 There were other American hits, including the captivating double-header “You Lost The Sweetest Boy” (no.22 in October) and “What’s Easy For Two Is So Hard For One” (no.29 in January 1964), before “My Guy” finally peaked at no.1 in April 1964. It was also Mary Wells’ name on the label’s first Top Ten British single, issued on the Stateside label here in the days before Motown qualified for its own separate identity. In a chart dominated by the new Mersey Beat-group wave, “My Guy” entered at no.37, 21 May 1964, before loping unstoppably to no.5, beneath Cilla Black’s “You’re My World” by 18 June – and, re-issued in 1972, repeated the feat as high as no.14…

There was to be one further Motown Chartbuster, a duet with Marvin Gaye linking “Once Upon A Time” c/w “What’s The Matter With You Baby” (Billboard no.19/17 in May 1964). Making Mary the first of Marvin’s ‘Girl’ partners, for with Mary Wells gone he’d go on to chart with Kim Weston and Tammi Terrell.

Mary Esther Wells was born in poverty to a single mother, 13 May 1943, but her career grew inexorably with the burgeoning fortunes of Motown. Through its tutelage she was its first female focal point, recognised and lauded by arbiters of Teen taste from Dusty Springfield to the Beatles on down. When Searchers lead singer Tony Jackson went solo he not only covered “Bye Bye Baby” as his launch single, but followed it with “You Beat Me To The Punch”. Still barely twenty-one years old, ‘Miss Hitmaker’ toured Britain as the special guest of the Fab Four and found them ‘perfect gentlemen’. I caught the Autumn ‘package tour’ at Hull’s ABC Regal cinema, with her slinky good looks showcased in a ten-minute three-song excerpt from the Motortown Revue. She was backed – awkwardly, by Brian Epstein’s Sounds Incorporated, but nothing could diminish the sense of something new and sweetly significant taking place. Yet her celebrity was already running out.

Perhaps intimidated by the wealth of talent within Motown she’d already stopped trying to write her own songs, and in what she mistakenly saw as an astute career move, on the crest of a chart-wave, she unexpectedly re-resigned to Twentieth Century Fox Records. Presented as the face of young black America, she’d always ducked attempts to celebrate her success as part of a racial thing. She saw herself purely as a singer, a performer. But without the black artist’s support structure and the R&B identity of Motown her career nose-dived. Never to recover. When she quit ‘Hitsville USA’, the magic stayed in Detroit. Her final American Top 40 entry, “Use Your Head” no.34 in January 1965, is a fair Motown imitation from her predominantly white new company. But pseudo-Motown was suddenly by no means a scarce commodity, and Mary Wells got lost in the deluge. 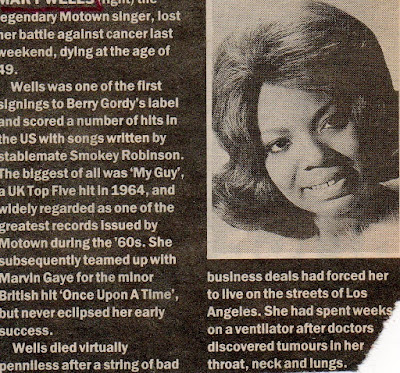 There was much subsequent frantic label-hopping to Atco, Jubilee, Epic and Warner Bros with sporadic hints of a comeback that never quite materialised. Positively for Mary there was brief marriage – to producer-guitarist Cecil Womack (they split in 1970, and she married his brother, Curtis), and four children, but creatively there’s a certain irony that even by the mid-sixties her albums consist of a complete Beatles tribute – ‘Love Songs To The Beatles’ (1965), an unlikely Rolling Stones covers – “Satisfaction”, and second-hand Supremes material – “My World Is Empty Without You” both (on ‘The Two Sides Of Mary Wells’, Atco, 1966). Eventually some of her later sides – such as “Ain’t It The Truth”, or “The Doctor” recorded for Reprise, would be rescued by the Northern Soul fraternity where she remained a respected name.

There are distressing tales of her final years, of bankruptcy and ill-health, with her medical bills footed by Rock star fans Bruce Springsteen, Phil Collins and Rod Stewart. But essentially, Mary Wells was Detroit’s ‘Little Miss Hitmaker’, Motown’s first First Lady Of Soul. And that brief but lush golden span of hits is more than enough to ensure her a unique footnote in Pop history. 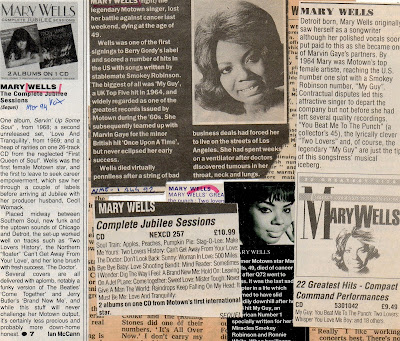