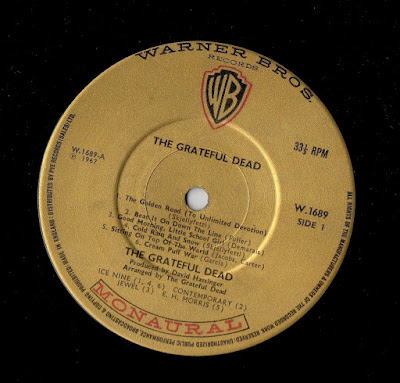 WHAT A LONG
STRANGE TRIP…
THE FIRST
GRATEFUL DEAD
ALBUM

I’ve still got it – the Deadhead ‘Skull & Roses’ T-shirt. I wear it on ritual occasions. I wore it to revisit Stonehenge. I wear it now to revisit this revered and mystic load of old Rock. But does it still stand up? Stonedhenge – just about. The Dead – would YOU after all that spiked Electric Kool Aid? Fact is, Captain Trips and the Warlocks were always something mythic wrapped in something enigmatic. Hank Harrison’s Beat and beatific ‘The Dead Book’ (1973) takes a thick manic-prosed volume tricked out in grizzled archive pix, psychedelic posters and Egyptian tomb glyphs to get this far, and yet still can’t encompass the half of it. Hank’s scrupulously researched biog goes some way to explaining the sheer IMPOSSIBILITY of restricting the lysergic Dead maelstrom to mere vinyl. Already a major San Fran presence, they’d done an unsatisfactory 45rpm for an Indie label (“Don’t Ease Me In” c/w “Stealin’” for Scorpio Records 201, 1966) before pacting with an unsympathetic and somewhat baffled Warner & his Brothers for this debut twelve-incher. And I guess they, with producer David Hassinger, TRIED to make it work within studio discipline.

Lights, acid, roll the tapes – ACTION! Trippy Stanley Mouse art-sleeve – a clean-shaven Garcia wearing big grin and Uncle Sam top-hat collaged onto the solar photosphere. No sleeve-notes, not even full band-names, with the back cover split down the axis in reversed-out mirror-photo and lettering. And there are nine cuts, done over one long four-day weekend They do Sonny Boy Williamson’s lasciviously paedophile “Good Morning Little Schoolgirl” and Tim Rose’s “Morning Dew”. But where the Yardbirds compress the deviant Blues energy of the former, and Rose (or even the proto-Deep Purple Episode Six cover) explodes the latter in growling electric tension in just around three minutes apiece, the Dead lose the song’s internal dynamic by attempting to apply their loose spacey stage-jam fluidity to them. As they’d first done with “Morning Dew” at the January 1967 ‘Human Be-In’. And – by comparison, it don’t work. Even these were razored down to fit the album’s 34:53-minute playing time. Full extended edits of “Morning Dew” “Good Morning Little School Girl”, “Sitting On Top Of The World”, “New, New Minglewood Blues” and Jerry Garcia’s “Cream Puff War” were finally issued as part of Rhino Records ‘The Golden Road’ box-set in 2001. 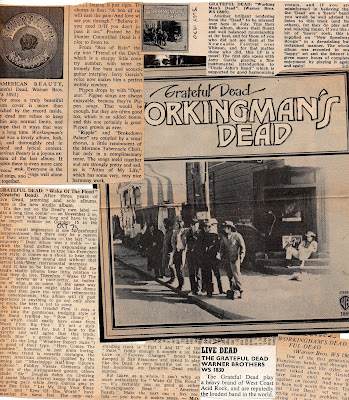 There’s an argument that the Dead NEVER mastered studio-craft until ‘Workingman’s Dead’ (February 1970) and ‘American Beauty’ (November 1970) – by which time they were well into a whole different thing anyway. But in the meantime, there are moments here that ignite with enough intensity to make the album worth your pennies. “The Golden Road (To Unlimited Devotion)” makes for a curious opener, their shot at creating an obligatory contract-fulfilling hey-hey-hey-catchy garage-band single with summery barefootin’ dancin’ ‘in a ring around the sun’, atmospheric transcendental overtones caught by the oriental-tuning of the guitar-break, into the freak-jangly crash-fade. Then Bob Weir takes vocals for Jesse Fuller’s “Beat It On Down The Line”, a jumpy workingman’s song about riding that train to a better life. A busy “Sitting On Top Of The World”, variously done by a primally rasping Howlin’ Wolf, and a hyper-charged Cream, has a long Blues lineage going all the way back to 1930. The Dead variant takes it at a lighter jerky faster lick, ‘Mississippi River, so big and wide, blonde-haired woman on the other side.’ Until, closing the first side, Garcia’s tempo-shifting “Cream Puff War” goes from hard noodling guitar soloing, vehement Dylan-phrasing put-down vocals (‘you’re constant battles are getting to be a bore…’) offset by almost waltz-time breaks, into a Punky echo-reverb finish into the play-out groove. 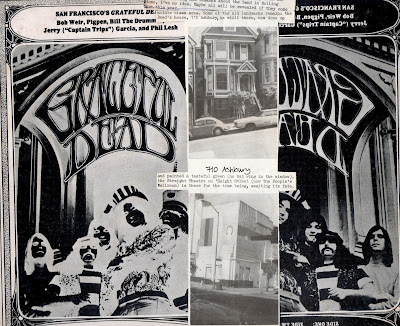 There’s also “Cold Rain And Snow” – highlighted by Ron ‘Pigpen’ McKernan’s Vox Continental organ, and “New, New Minglewood Blues” – both trad arrangements, which capture unmistakably Deadheaded sonic weirdness. While the vocal harmonies are raggedly rough-edged in a way that gives a raw spontaneous dimension to a live context, but less so when condensed down onto record. The full closing 10:01-minute duration of “Viola Lee Blues” allows them sufficient time to develop that riffed mantra quality until it starts blowing high-octane sparks towards the eight-minute crescendo end-game, neatly counterpointing Jerry Garcia-Bob Weir’s lead-rhythm guitar interplay over Phil Lesh’s bass pulse, before dropping back into the closing verse. It might’ve been done earlier by Noah Lewis’s Cannon’s Jug Stompers, but extending out with jazz-fluid guitar improvisations it comes closest to catching the Dead’s unique stage presence, unlike anything else across the spectrum of Rock, entering their mythic continuum. With Bill ‘The Drummer’ Kreutzmann’s rangey time-keeping tying it all together. 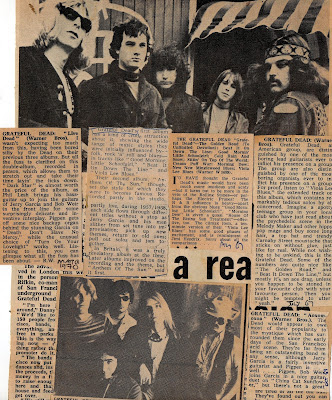 The Dead leave little beyond that tripped-out image by way of legacy. Even at the time there was an incredible wealth of new music jostling for attention, picking up clues from hints and mentions in ‘Record Mirror’ or ‘New Musical Express’ I was listening to Jefferson Airplane, Love, Electric Prunes, the first Pink Floyd singles. The Doors debut album had arrived in January. The Byrds ‘Younger Than Yesterday’ in February. The first Velvet Underground album came that same March. And that’s before you get to the singles. “Strawberry Fields Forever” was the UK no.2. I later picked up on a copy the Dead’s single “Born Cross-Eyed” c/w “Dark Star (2:50-min edit)” (WB 7186), although it’s impression was muted.

Now, for the uninitiated, there’s little here for 1980s Paisley revivalists to readily latch onto – no clean customised liftable motif like the Byrds Rickenbacker jangle, Syd Barrett’s acid-fried lyrics, or Thirteenth Floor Elevators garage-thrash. No Airplane hard-acid laser-focus, or Crosby Stills & Nash close-harmony. Fact is, with the Dead, it’s ALWAYS been necessary to suspend disbelief and take them on their own terms. And that, now – without all their attendant 1967 hippie paraphernalia, ain’t easy.

So file this one in your library under ‘SEMINAL’, and wear that T-shirt with pride, for strictly ritual occasions only. 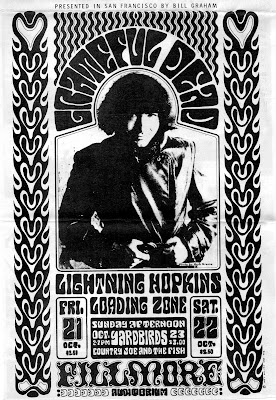 Posted by Andrew Darlington at 17:29