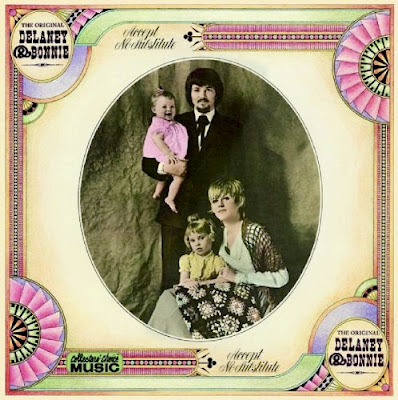 Album Review of:
‘THE ORIGINAL DELANEY
& BONNIE & FRIENDS:
ACCEPT NO SUBSTITUTE’
by DELANEY & BONNIE
(MAN IN THE MOON RECORDS)
www.facebook.com/ManInTheMoonRecords/

We know the story, right? How this married duo end up as walk-ons on their own album. There’s Leon Russell’s spangly guitar and gravity-defying keyboards in synergy with Carl Radle’s chuntering bass in a full-to-busting 35-minute track-list built on girders of driving swamp-heavy Funk, with well-connected friends on speed-dial, Rita Coolidge, Jim Keltner, Bobby Keys and on, clad in thrumming propulsive horns. While half the songs are Bramlett originals, check the writer credits behind Bonnie – first blue-eyed Ikette, on her soul-stirring “When The Battle Is Over” to find Mac ‘Dr John’ Rebenneck, or the pleading testifying “Do Right Woman” from Chips Moman originally Dan Penned for Aretha. Then read the co-writer credits of the wailing “Someday” and there’s Jerry Allison in there, or the impassioned “The Ghetto” to find Homer Banks with Jimmie Haskell strings. All spine-tingling – if more for the ‘Friends’ than the headline duo. This 1969 album came in a three-way label battle, from Stax who’d issued the duo’s debut LP ‘Home’ barely three months earlier, to Apple via litigation onto Elektra – before they moved on to Atco for their Eric Clapton hook-up. Recorded in LA, and more critically-acclaimed and influential than it was a big-seller, D&B were innovative in opening up a genre-portal into steaming Memphis R&B. 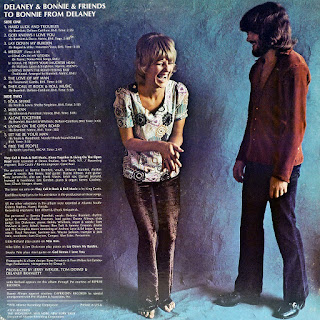 When Eric Clapton quit Blind Faith to join Delaney & Bonnie’s Friends it sent seismic shockwaves through the Music Press and made the duo overnight stars, they even got a hit single out of it. Although Clapton’s enthusiasm could have had something to do with the group’s superlative sidemen – Bobby Keys, Jim Price, Bobby Whitlock – Delaney’s easy familiarity and dexterity with all things Southern R&B certainly helped form a template for Slowhand’s own uneasy conundrum of the white London boy appropriating the Blues. The duo, and their marriage, broke up soon after Clapton stole the backing musicians and made his getaway. But the notoriously tetchy Delaney cut these two accomplished solo albums from 1972 and 1973, proving that his own strengths are not to be underrated. This good-value two-for-one pack is crammed full of swamp-choppy Funk-bass, churchy Soul-organ, punching Stax horns, cutting guitar, sinuous slide, Clydie King, Gloria Jones and Vanetta Fields impassioned gospel back-ups and duetting on “Try A Little Harder”, plus Jim Gordon’s baritone sax, all tied together by Delaney’s own pleading testifying vocals. There’s even tribal percussion on “Some Things Coming”. Providing more than enough evidence of what turned Clapton’s head around. 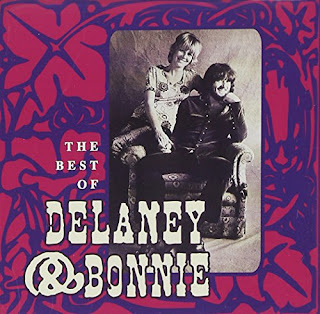 Posted by Andrew Darlington at 10:57