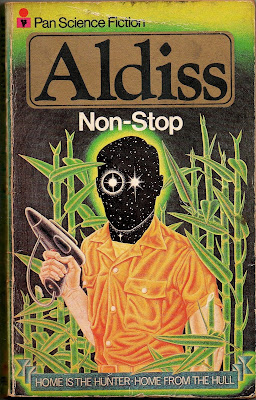 BRIAN ALDISS:
NON-STOP FROM THE STARS 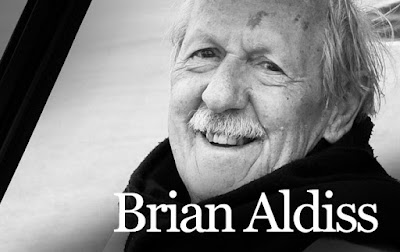 ‘HOME IS THE HUNTER. HOME FROM THE HULL’

There used to be a theory in Science Fiction circles that the ‘Generation Ship’ story was a kind of writer’s litmus paper test. But if, at one point in their careers each writer would use the plot-device, Brian Aldiss met the challenge head-on, with his debut novel, handling the theme in typically uncompromising ways it had never before, and seldom afterwards been done. It was not ‘Non-Stop Into Space’ or ‘Non-Stop From The Stars’ as maybe others would have slanted the title. Aldiss was different. He was staking his claim. Paring away the usual SF paraphernalia with just a hyphenated seven-letters to lay down his challenge. 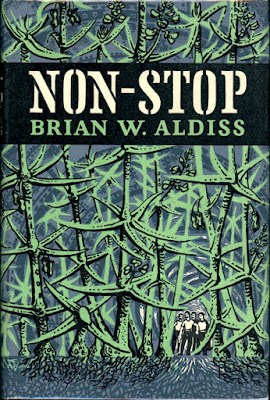 Audiences have become so familiar with Warp-Drive and Faster-than-light Starships flipping in and out of wormhole trans-dimensional portals that it’s hard to recapture a sense of stellar distance without all that quasi-scientific gobbledegook. Or to realise that by staying within the realm of conventional physics and viable technology the stars are quite literally unreachable, an insurmountable contradiction not only of speed but of time. Yet SF found ways of overcoming journeys of hundreds of years between stars by the Long Sleep hibernation technique, which led to much highly inventive fiction. And then the Generation Ship itself, in which the space-ark becomes a self-contained world in its own right, sufficient to enable entire lifetimes to be lived as the journey proceeds.

The idea was already there in early issues of ‘Wonder Stories’ – Laurence Manning’s “The Living Galaxy” (September 1934), and ‘Amazing Stories’ – Don Wilcox’s “The Voyage That Lasted Six-Hundred Years” (October 1940), before Robert A Heinlein defined the sub-genre with two linked tales – “Universe” and “Common Sense” published in the May and October 1941 issues of ‘Astounding SF’, (becoming his 1963 novel ‘Orphans Of The Sky’), in which the generation-ship crew has long-since forgotten it’s on a ship at all, and has degenerated into an enclosed superstitious society. 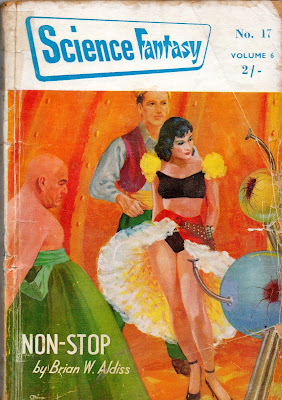 When Brian Aldiss took the litmus paper test, his spin starts out with a compressed thirty-eight-page novelette in ‘Science Fantasy’ (no.17, February 1956), taking cover and inner art by Gerard Quinn. John Carnell editorialises that ‘it is a great pleasure for us to present the first novelette by Brian Aldiss insofar as we believe that, like several other British authors, he has a long and successful future in front of his as a fantasy writer.’ The subsequently expanded novel published through Faber & Faber is dedicated to ‘who else but Ted Carnell, Editor of ‘New Worlds’ and ‘Science Fantasy’ and starter of ‘Non-Stop’.’ Although there are numerous evolutions between the two incarnations. A 1959 American edition published through Criterion Books was retitled ‘Starship’ – and provided with atmospheric Joel Dolens cover-art, as well as its paperback edition a year later from Signet/ New American Library, with a new Aldiss Prologue and striking, if not altogether accurate art by Paul Lehr showing a rocket-shaped ship blazing above a planetary surface. The blurb, ‘the magnificent novel of a weird and terrifying journey – generations in length – that knew neither sun, nor moon, nor stars,’ is at least appropriate. 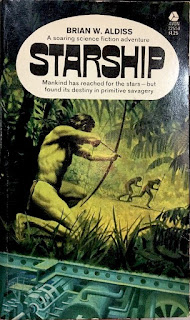 Hunter Roy Complain is not your regular Space Opera hero. His name offers a clue. He complains of ‘a longing for what he had never known and could put no name to,’ that outsider sense of the oddness of things, that there’s ‘always something missing, missing.’ He seeks what he terms ‘the big something,’ which is a trait in keeping with the fictional social misfit rebel stereotype. He asks the ‘why are we here?’ question, and the ‘what is the object of the world?’ question. But when his woman – Gwenny, is snatched by a rival tribe he makes no heroic rescue attempt, merely returns to meekly accept his punishment beating.

Aldiss’ generation ship is ‘constructed of layers and layers of deck… and these layers do not end, because they eventually turn a circle on to themselves.’ The everlasting rings form eighty-four decks within an elongated egg-shaped ship, three-quarters of which is jungle. While the semi-nomadic rag-taggle Greene tribe travel ‘like a maggot through a mushy apple’ amid a rapidly-growing ‘ponic tangle’ of overgrown hydroponic plants that infest the Sternstairs, Midway, Main Corridor, the festering continent of Deadways and the cosy squalor of Quarters, all ‘thick with phantoms and mysteries and riddles and pain.’ There are legends and stories of supernatural Outsiders masquerading as men, mutants, supposedly-extinct Giants, sub-men, hermits and the terrible mythical Forwards People, but to Complain ‘theories are less than flies to me,’ and the people travel ‘knowing neither the journey nor the destination.’ 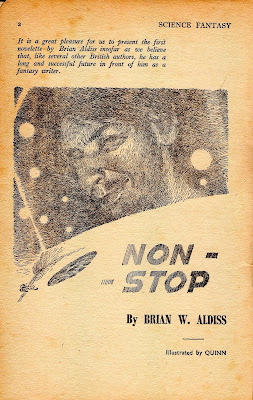 ‘TO TRAVEL HOPEFULLY IS A
BETTER THING THAN TO ARRIVE…’
(RL Stevenson, quoted on the title-page on ‘Non-Stop’)

‘I had settled into the back bedroom of our North Oxford house to write my first science fiction novel, ‘Non-Stop’,’ recalls Aldiss in his autobiography ‘The Twinkling Of An Eye’ (Little Brown, 1998). ‘Telling myself the story gave me great pleasure, I was absolutely sure of what I was doing. Faber published the book in 1958. Its publication brought in enough money to enable me to buy my own typewriter. That Swiss Hermes portable and I lived on intimate terms for many a year; I used it as a pillow on more than one occasion. Many words, letters, stories, novels ran through its metal veins.’ 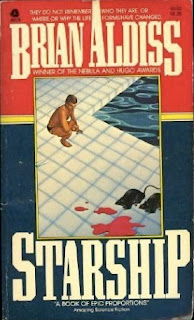 With an impatient but playful attitude to conventions, Aldiss was already straining against genre-restrictions and subverting accepted concepts in ways that anticipate the New Wave eruption some years ahead down the timeline. The Greene tribe and their orgiastic party unconsciously prefigure Charles Platt’s messily scatological ‘Garbage World’ (1967). The tribe use mangled aphorisms ‘leap before you look’, ‘the devil you don’t know may conquer the one you do’, ‘Faint heart hath never won foul fiend’ and ‘the truth never set anyone free.’ Their expletives include ‘for gods ache’, ‘holy smother’ and ‘jeezers nose’, while death is euphemised into The Long Journey. The ‘holy trinity of Froyd, Yung and Bassit’ deal with the hyper-claustrophia of containment by hurling away ‘the discomfort of reason’ to ‘live in psychosomatic purity.’ The continual edge of unpredictable madness lurks just beneath the surface, these social disciplines have evolved to channel it, completely at odds with regular SFictional heroics. There’s the psychobabble greeting ‘expansion to your ego’, to which the response is ‘at your expense’ and ‘turmoil in my id.’ Literate word-games that Aldiss would delight in across the rich arc of his writing. The attitude to women is clearly unreconstructed, but within the logics of the society conjectured, there’s a consistency. In a society that values fertility, Complain needs Gwenny for status, ‘he did not love her, often he hated her, but she was his, necessary.’ 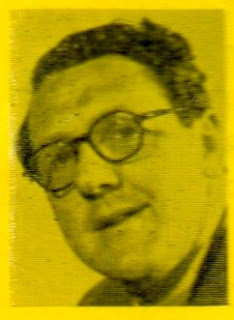 It’s the deviously garrulous self-seeking priest Henry Marapper – a bulky ‘totem, roughly moulded in lard,’ who leads a bickering ill-matched group to penetrate the mysteries of their enclosed realm. He has salvaged a map from the lieutenancy’s destruction, or rather a ‘Manual Of Electrical Circuits Of Starship’. Armed with looted Dazer pistols, alongside Complain are Bob Fermour, ‘a slow fellow’ who ‘at five foot eight’ was ‘nearly a head taller the others,’ Ern Roffery the Valuer, and facially-deformed ‘Slotface’ Wantage. They navigate from Level Sixty-One to the ‘sea’ called Swimming Pool, then to where ‘ancient weapons’ have ruptured a zero-gravity zone. An interlude with evolved rats is a comic absurdity. It’s very much a pell-mell adventure, a hazardous trek through strange realms, an all-action quest within the constricted world’s wealth of inventive strangeness, as revelations come non-stop too. On their eighth wake they reach Deck Twenty-Nine.

The group in the novelette version have different names, Complain is Tom Brandyholm, with Priest Carappa (Marapper) – ‘nobody suffered indignity with more dignity than he.’ Slotface is ‘Rockface’ Wantage, and Fermour is Bob Crooner. While the lovely object of Complain’s attentions, inaccurately pictured by Gerard Quinn on the ‘Science Fantasy’ cover, starts out as Viann, before becoming Laur Vyann. Arrival and interrogation at the more organised Forwards is less the end of the quest as the start of a new cycle. Complain learns the twenty-fourth-century ship that constitutes their world was crossing the eleven light years (at a speed specified in the novelette as one-twentieth light-speed) back from a New Earth orbiting the sun-star Procyon, when it was hit by the nine-day ague caused by protein in the alien water. While Gregg – captain of a Deadways tribe besieging Forwards, turns out to be Complain’s lost ‘ran amok’ brother. A tribe, in turn, threatened by an encroachment of giant rats. 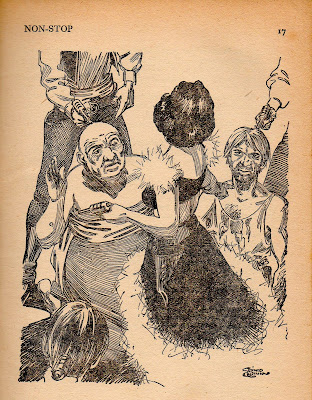 Intrigue and conspiracy, subterfuge and betrayal, secrets and concealment multiply as Complain and Viann/ Vyann attempt to make sense of their ‘dangerously mad’ insane enclosed society and its predicament. It’s with Fermour/ Crooney’s unmasking as an ‘Outsider’ anthropologist that leads to the final revelation that the long voyage is actually over, that the ship has been endlessly held in a quarantine orbit around Earth for long generations, due to their accelerated mutations, the ‘speeding up and degeneration in the metabolism.’ There’s running battles in inspection-ways as they begin systematically destroying decks hunting out Giants. The novelette version has Complain using a space-suit to venture outside the ‘Big Dog’ ship to search out the intruders from Earth. In the novel itself the orgy of destruction leads to the ship’s final break-up into its eighty-four constituent decks. Necessitating their rescue. Whatever, the action comes hard and relentlessly fast.

If the Generation Ship theme was a litmus paper test for genre writers, he’d taken it higher and further than anyone else dared venture. ‘Thirty or so years later, despite all the change, ‘Non-Stop’ and ‘Hothouse’ remain in print in England’ Aldiss comments, ‘but their warmest initial reception was in the United States Of America.’ It was his first SF novel. Many more were to follow. 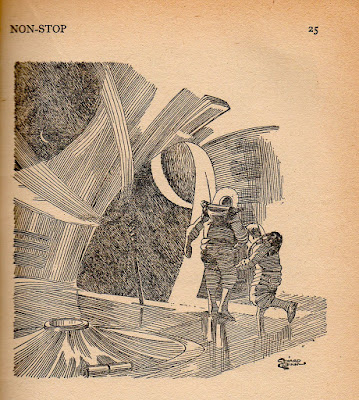 Posted by Andrew Darlington at 17:56