Music: THE MOVE and TREVOR BURTON 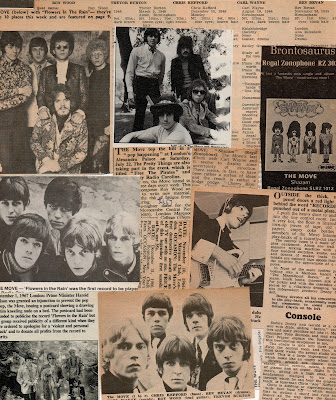 NO MORE
FLOWERS IN THE RAIN... 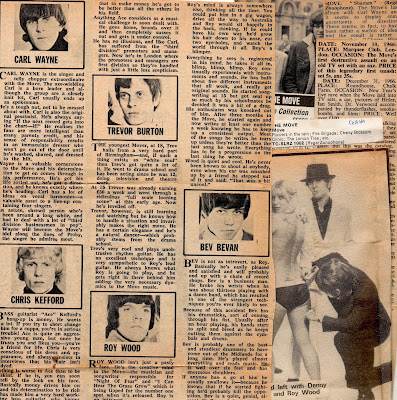 Who cares about Move now? Roy Wood became the Angel-Fingered Wizzard of the seventies. Jeff Lynne ELO’ed and Wilbury’ed through a few peaks and lots of subsequent troughs. Drummer Bev Bevan lived on through ELO II. And some-time vocalist Carl Wayne married ‘Miss Diane’ from ‘Crossroads’. So what?

Move craved a slice of late-sixties chart action so desperately they assumed and quick-changed a bewildering blur of image-shifts and fast-cut gimmicry before grabbing their eleven hit singles. They became Gangsters, they chopped up exploding on-stage TV sets in mid-concert, they were sued by Prime Minister Harold Wilson, but when they finally scored it was through Roy Wood’s eclectic magpie flair. Their 25-track ‘Best Of…’ grab-bag of hits and covers documents the period he was perfecting this technique of ramraiding early Pop hooks into a heavy Rock that flirts with a radio-tease of lyrical controversy. “Night Of Fear” takes its riff from the “1812 Overture”, and runs an is-it-or-ain’t-it an LSD Bad Trip across the top of it, sufficiently acid-nudging to be hip, yet vague enough to be radio programmable, while the Tchaikovsky sample gave it an instantly memorable buzz. One play stamps it indelibly.

“I Can Hear The Grass Grow” ducks back into the acid daze by sucking in LSD consciousness-expanding imagery, punctuated by a snappy whistled motif. But it takes care to drag a get-out escape clause for daytime radio consumption in that the lyrics might just be the gooey soft-centred psychedelic surrealism that infects every other low-rent Pop writer of the period. Then “Flowers in the Rain” grows even sharper – coinciding its key word with the Flower Power infestation, but distanced enough to avoid the fad’s sillier manifestations. Not ‘Flower Power’, but close enough to benefit from its marketability. Famously, “Flowers in the Rain” got to become the first ever record played on Radio One. By a young Tony Blackburn. The rest is hysteria. 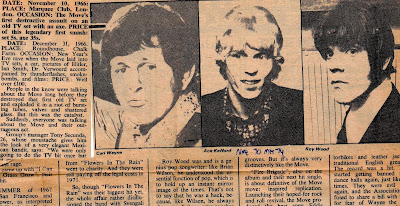 Wood wrote sublime pop – “Fire Brigade” with its pyromania of mind-jerking attention-grabbing siren wails and guitars, garnished with a nostalgia double-take on adolescent schoolkid sexuality – ‘when I put my hand upon her leg/ she hits me with a rule’, aimed at a record-buying audience to whom such classroom-antics must surely be a relatively recent part of their lives. Move specialised in slightly twisted hits. They never became arty, self-indulgent, experimental or improvisational like many of their peers. They best excel at style-xeroxing. Their only no.1, “Blackberry Way” is “Penny Lane” turned inside out… But they did the first Peel Sessions too. And in the BBC studios all that perfect Pop was artfully and refreshingly recreated for ‘live’ radio, “Fire Brigade”’ “Blackberry Way”, and Wood’s one miscalculation – “Wild Tiger Woman” with its dollops of bondage sex-references that proved just a little too extreme for the tender sensibilities of the DJ’s of the time.

Such familiar hits were inflated with songs nicked from other people. Hence they do the Byrds “So You Wanna Be A Rock ‘n’ Roll Star”, Tim Rose’s “Morning Dew”, and bizarrely the Beach Boys “California Girls” too. The snag here is that with the R&B bands of a few years earlier you earned kudos through your accurately authentic recreation of obscure American Blues originals. But things had moved on. You don’t earn credibility-points by covering Love’s “Stephanie Knows Who”, you strive to create something equally inventive. And that was never in the band’s DNA. Having achieved the slice of late-sixties chart action they so desperately craved, straying far from the familiarity of their class single’s formula would prove problematic.

So who cares about Move now? Well, I’d still give them a listen. 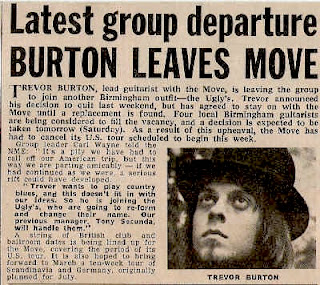 Balls. Can this be the same Trevor Burton? Take magnifying-glass to the microprint inner Track Comments, and there’s a single mention of the Move and Steve Gibbons Band. So yes, it’s him, but Trevor’s far from trading off the legendary status of those sparkling Pop-Psych singles of yore – “Night Of Fear”, “Flowers In The Rain” and the rest, through Gibbon’s 1976 “Tulane” or his collectable “Fight For My Country” one-off single through Brummie super-group Balls. Although Trevor featured in line-ups of Bev Bevan’s millennially-resurrected Move, this first solo album features only two of his own songs. The autobiographical “Hit And Run” prompted by a fifty-year-old photograph of ‘five hard kids from Birmingham, with stardust in our eyes’, and desert-storm protest “When It All Comes Down”.

The other nine are relentlessly forward-looking, taking Tom Petty and Eddie Vedder, Radiator Hospital, Al Scorch’s excoriating “Poverty Draft” and Vic Chesnutt’s scarily intense “Flirted With You All My Life” – about the lure of suicide. Powerful, mostly-acoustic with tasteful Abby Brant interjections, and Jack ‘Hefner’ Hayter’s pedal steel, it closes with Mountain Goats “Andrew Eldritch Is Moving Back To Leeds”, given personal relevance. We all come back to where we started. Be positive. This ain’t over. ‘Long Play’ also comes in coloured vinyl editions worth taking out a QuickQuid loan to get your hands on.