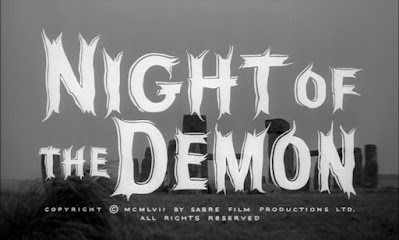 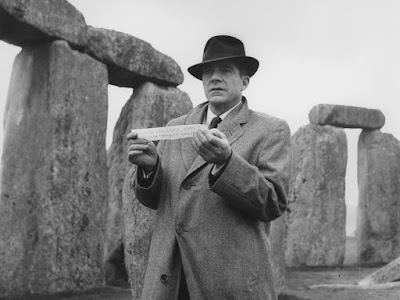 The first time I visited Stonehenge there was no visitor’s centre, and no inhibiting wire. You could walk up to the stones and touch them. Indeed, you could climb on them, graffiti your initials, or even carve your name into the stones. Which is why the fence was inevitably necessary. Nevertheless, the way I saw them then, the way you see them here, has a strikingly stark austerity that the tourist paraphernalia reduces to theme-park spectacle. Stonehenge constitutes a real link to ancient mystical experience beyond our understanding. The perfect metaphor for what ‘Night Of The Demon’ does. This is no splatterfest. No gore-porn. Nothing like that. Yet this moody, edgy black-&-white curio has its own way of exerting its grip, while inflicting some genuinely unsettling sequences. It now seems quaintly old-fashioned, indeed – that’s one of its charms, yet it remains a pretty creepy film. Dana Andrews plays John Holden, a smugly confident American psychologist who arrives in England to deliver a symposium lecture debunking the paranormal. Defining the film’s central contradiction, he embodies the rational reductionist tendency to whom science and reason provide the only explanations. He’s set up against Dr Julian Karswell (Niall MacGinnis), an Aleister Crowley-style adept who exploits mystical forces, but is also compromised by them. He understands the awesome power he uses, and fears it. Joanna (Peggy Cummins), is the catalyst between them. Her father, Professor Harrington (Maurice Denham) was shocked-to-death by Karswell’s runic curse in the opening sequence, establishing the premise on which the yarn hangs. 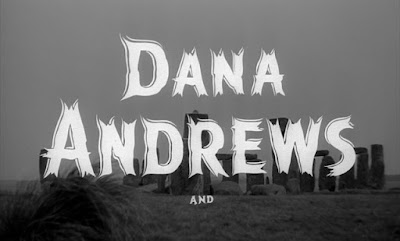 Holden taunts Devil Cults, explaining witchcraft phenomena away as the power of suggestion. At the conference, held at the Victoria Hall, link-man O’Brien presents Harrington’s experiment in which a comatose called Hobart is brought in an ambulance, his mind retreated into a womb of darkness. Holden uses hypnotism. Hobart wakes. Screams. Runs amok. It is revealed he was another disciple of Karswell – ‘The Order Of The True Believers’, who – like Professor Harrington, was also passed the parchment dealing death to whoever possesses it. To save himself, it is necessary to pass it back. He escapes, but leaps to his death from a window. After a series of strange experiences and an occult death or two Holden learns the hard way to respect the occult forces he’s previously ridiculed. There’s a séance sequence which is largely played as light mocking Elstree comedy. The gullible old ladies, the low-rent charlatan contriving front-room thrills for them with a repartee of cheap parlour tricks. Until the tone abruptly changes, and he becomes host to genuine voices from beyond. As shocking for him as it is for his audience. 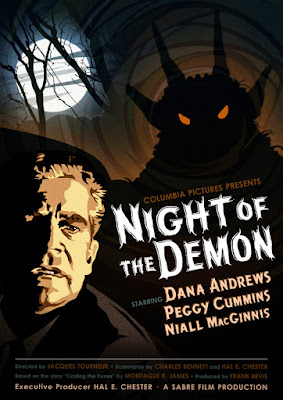 Screenwriter Hal E Chester (visiting American director Harold Ribotsky) worked up the script from a short story – “Casting The Runes”, one of seven tales collected into ‘More Ghost Stories Of An Antiquary’ (London, 1911) by MR James. In his day the scholarly Montague Rhodes (MR) James (1 August 1862–12 June 1936), Provost of Eton College, constituted something of an occult moderniser. His ghost stories helped wrench supernatural spectres away from the antiquated Gothic trappings of medieval Transylvanian never-neverlands to transplant them directly into recognisably real then-contemporary settings. He’s aware that beneath the flimsy rationalist tegument of modernity lurks a yawning chasm of millions of years of limbic superstitious animal-fears terrified by the powers of the natural world, and he uses antiquarian relics or mystical runes as links to ‘Old Religion’ weirdness. As such he was reconfiguring the genre for the new – that is, mid-twentieth century. By working through implication and inference. So providing the ideal source material for French-born Jacques Tourneur to transfigure onto celluloid.
The son of movie director Maurice Tourneur, he’d already worked with Val Lewton on RKO’s understated soft-horror ‘Cat People’ (1942) – part-reprised in the sequence where Holden and Joanna visit Karswell’s Lufford Hall (with Brocket Hall in Hertfordshire standing in), where he half-glimpses things that start eroding his certainty. The sorcerer’s demonic familiar in the house, and the smoking-hole in the night-forest beyond. Tourneur followed it with Lewton’s highly-regarded ‘I Walked With A Zombie’ (1943), before freelancing ‘Night Of The Demon’. Afterwards, he went on to work for American International, directing not only Vincent Price but ‘Your Favourite Creeps Together Again’ – Boris Karloff, Peter Lorre and Basil Rathbone in the Richard Matheson-scripted ‘The Comedy Of Terrors’ (1963). He was also responsible for uniting Vincent Price with sometime Pop Singer Tab Hunter and John LeMesurier in the downright strange ‘The City Under The Sea’ (aka ‘War-Gods Of The Deep’) (1965) supposedly based around an Edgar Allan Poe poem. Tourneur also directed episodes of ‘The Twilight Zone’ before retiring home to France. But his experience of working on the British-made ‘Night Of The Demon’ was not entirely untroubled. 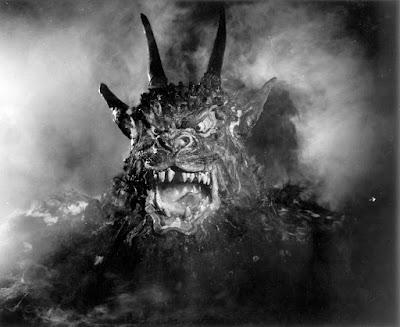 Producer Hal E Chester saw rushes of Tourneur’s vividly imaginative locomotive speeding through the night belching steam with its glowing furnace a ‘basket of light’, saw how it was used as a metaphor for the night-demon itself, and considered it way too subtle for its target audience. Despite Tourneur’s conviction, he knew it needed more explicit content, and so inserted animated images of the demon into the footage, against the objections of both the director, and writer Charles Bennett. But maybe his intervention actually works, the crude horned monster – ineptly transferred from Hieronymus Bosch, is the most frequently reproduced still, and was splashed across foyer-posters where subtlety and suggestion were not exactly what the punters were looking for. The late 1950s was not a great period for classic macabre – the Universal cycle had long since run its course, lapsing into slapstick sequels of sequels, and Hammer had yet to resurrect the genre from its gothic crypt. In its stead was the atomic-paranoia shock-angst of ‘The Beast From 20,000 Fathoms’ (1953), ‘Creature From The Black Lagoon’ (1954), ‘Invasion Of The Body Snatchers’ (1956) and ‘The Blob’ (1958). In the meantime, there is Tourneur’s demon… 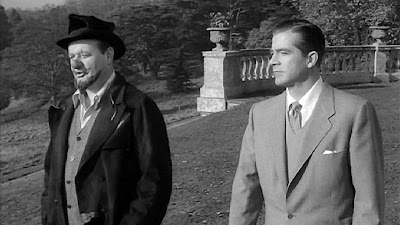 Events converge at Clapham Junction on the Southampton train where ‘all evil must end’. During an encounter in the British Museum Library Karswell slips a runic parchment into Holden’s research files. Holden is finally determined he must return the parchment, and races along the train-corridor to intercept Karswell. It is six minutes to ten. Karswell has Joanna in a hypnotic trance. And refuses to accept the envelope, then refuses a cigarette… just in case. Karswell is edgily afraid. He knows only too well what forces are involved. As cops intervene and Karswell makes to leave the corridor Holden passes him his coat, without thinking he takes it. Realising, at the last moment, that the runes have been passed. The parchment escapes and dances away, Karswell chases it down the corridor, then out along the train tracks. It incinerates to cinders moments before he’s able to retrieve it. And the demon roars towards him, an apparition part steam-engine, part rearing monster. It snatches him up and rakes him with its smoky claws. What’s going on? ‘Maybe it’s better not to know’ says Joanne. It is ten minutes past ten. Rail staff and cops speculate over the mangled corpse, surely it must have been the train that hit him? What other explanation can there be? ‘You’re right. Maybe it’s better not to know’ Holden agrees. They leave together as another dark demonic train hurtles past them into the night… 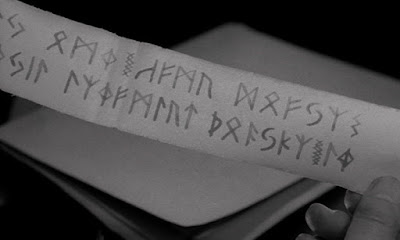 ‘NIGHT OF THE DEMON:
WHO WILL BE THE NEXT IN
LINE TO DEFY THE CURSE…?’ 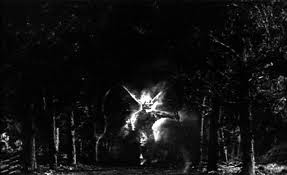 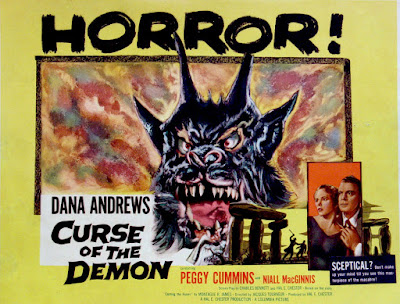 Posted by Andrew Darlington at 15:52