The WHO & Pete Townshend 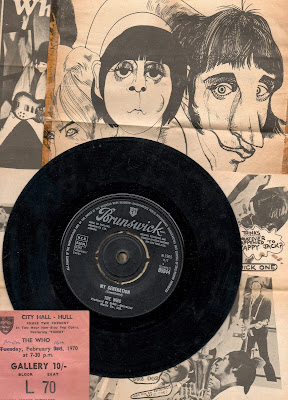 ‘THE KIDS WERE ALRIGHT…’
DVD Review of:
‘THE WHO’
(DVD, Bio. Go-Entertain goentertain.tv 44-minutes)
“Pictures Of Lily” is about masturbation. And in case you failed to pick up on that, Keith Moon decorated his drum-kit with saucy pin-ups. “Pinball Wizard” is about a deaf-dumb-&-blind kid who smell-tracks the ricochet-dance of the pinball with his nostrils. Right. But what the hell is “Happy Jack” about? A seaside donkey on the sands of the Isle of Man… and, kids drop things on his head… right, so far, and… what the hell was Pete Townshend on? Well, later he did all the usual Rock & Roll chemical stimulants, it’s part of the job description, but back then it was strictly purple hearts and maybe the occasional puff of dope. The mind-altering content of those lyrics was strictly his own. Apparently he had a serious grudge against the world, because he was self-conscious about his big nose. But Townshend was just one corner of the four-sided construct that was the Who. 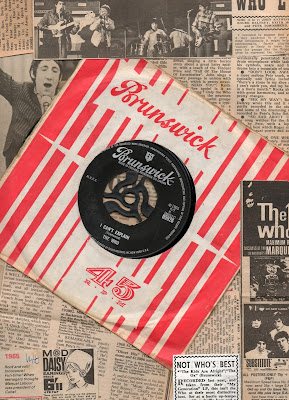 Seldom in Rock history have each member of a band been so integral. Roger Daltrey gives voice to the lyrics Townshend lacked the confidence, or the vocal range to sing. And as a front-man he’s got few equals. While it’s impossible to imagine, say, “My Generation” without John Entwistle’s muscle – he plays bass like it’s a lead instrument, or indeed, the Who without his sinister “Boris The Spider”. And Keith Moon? well – nuff said. He ensured the drum-riser was as much the focal point, and more, as any other element of the band. ‘A Destructive Tour De Force’ yells the DVD cover, ‘On Stage They Personified Rock & Roll’ it asserts. And just for once the hype is justified. Extracted from the History/Biography Channel, this painfully-abbreviated DVD hurtles you through the story at breakneck speed, crammed with shrapnels of explosive visuals, guided by the group’s biographers Richard Barnes (‘The Who: Maximum R&B’, 1999), Dave Marsh (‘Before I Get Old: The Story Of The Who’, 2003), Andrew Neill and Matthew Kent (‘Anyway Anyhow Anywhere: The Complete Chronicles Of The Who 1958-1978’, revised 2005), plus Keith’s personal assistant Pete Butler, John’s personal assistant Mike Bratby, and John’s wife and mother. Lenny Kaye too. 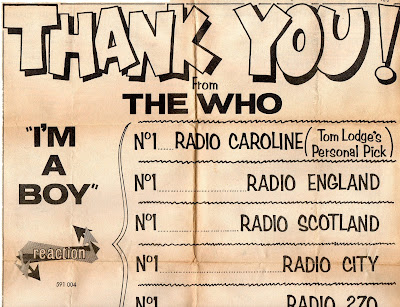 There’s a sense in which, because the Who felt they’d arrived late at the sixties banquet, they had time to make up. Subsequently, everything about them was writ large, larger and largest. From Pete and John meeting at Acton County Grammar School, to Pete at Ealing Art College to their techno-destruction at ‘The Railway Hotel’ they were a seriously out-of-kilter proposition. They’d already cut a sharp Mod single as the High Numbers (“I’m The Face”) when producer Shel Talmy got them into the Brunswick studios. He saw them as a viable variant on his previous wards, the Kinks, but was so uncertain of their abilities he got Jimmy Page, Nicky Hopkins and the Ivy League in to dub the more technically demanding bits onto the session. It could be argued their “My Generation” single is a more clumsily phrased spin on teen-anthem “The Young Ones”, and – although early stutter-free takes exist, Daltrey’s speed-damaged stammer gives its eloquent inarticulacy a kind of instant juve-speak relevance. While ‘why don’t they all f-f-f-f…’ invites an obvious missing word other than ‘fade away’ at a time when you couldn’t say ‘fuck’ on record, with or without ‘Parentally Advised’ sticker. Even on the sleeve-photo of their debut album – ‘My Generation’ (December 1965), they look malevolently deranged, not even in the Rolling Stones’ sense of stylish danger, more a damaged dysfunction that was nevertheless the alchemy that powered them, a spluttering popping Pop-Art dislocation of pure envinylised anger. The album is made up of direct Mod narratives, fattened out with some regulation Soul-covers. When Pete outraged the ‘Daily Mail’ demographic by claiming the only time he ever felt patriotism was watching Mods wrecking Margate, we knew exactly what he meant. This was extreme tribalism. Yet their subsequent albums surfed a precipitously steep learning-curve. 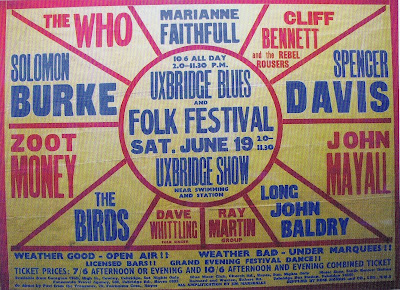 There were hits, and tours, but a financially-disastrous record-deal, complicated by their expensive instrument-trashing, ensured they were permanently bankrupt through groundbreaking LP’s ‘A Quick One’ (December 1966) and ‘The Who Sell Out’ (January 1968). The relative chart-failure – only no.10, of the magnificent “I Can See For Miles” provoked Pete, ever handy with a pertinent quote, to ‘spit in the eye of the British record-buyer’. Until ‘Tommy’ (May 1969) rescued them into the global Rock-aristocracy – magnified wide-screen through high-energy shock-appearances at the ‘Monterey’ and ‘Woodstock’ festivals, then through Ken Russell’s inspired intervention, into cinemas too. Yet behind the blue eyes their teenage wasteland left a trail of devastation. Keith inadvertently ran over and killed his chauffeur. Eleven audience-members at a Cincinnati stadium were trampled to death. Original drummer Pete Meaden committed suicide, and Keith overdosed to death within months of each other. ‘Keith couldn’t survive Keith’ observes David Wild of ‘Rolling Stone’. Then Entwistle, despite his ‘the Ox’ nickname, succumbed to a cocaine-induced heart-attack in a Las Vegas hotel. Although Daltrey and Pete Townshend continue – as they have the creative momentum, and every moral right to, with stand-in drummers Kenney Jones and then Zak Starkey, they are only two corners of what was essentially a four-sided construct. This DVD omits their ‘Live8’ vindication, but ends on a positive high with the release of ‘Endless Wire’ (October 2002), their first album of original material for twenty-four years. They’re now battered, heritage Rock. But still angry.
Featured on website:
‘SOUNDCHECKS’
(UK – October 2010) 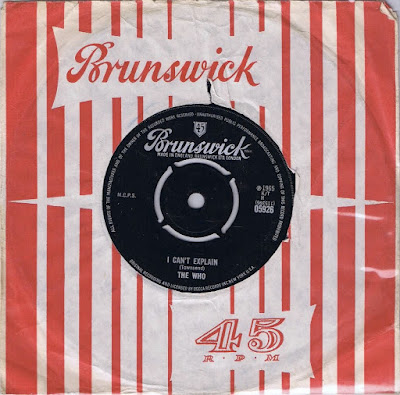 PETE TOWNSHEND:
HE CAN SEE FOR MILES 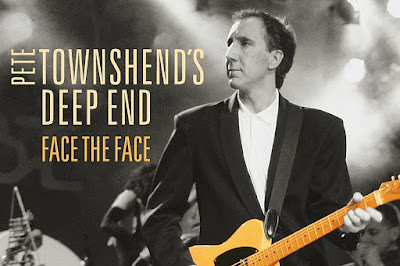 DVD/ CD Review of:
‘FACE THE FACE’
by PETE TOWNSHEND’S DEEP END
(EAGLE VISION) www.eagle-rock.com
Pete Townshend was a man with a grudge against the world. With his anger ventriloquised by Roger Daltrey and targeted by the Who it exploded into some of the most lyrically-distinctive high-energy singles of the 1960s. But for each Who album he took at least one lead vocal, and during the group’s gradual wind-down, issued a series of solo albums more critically respected than commercially successful, including ‘Empty Glass’ (1980) and ‘All The Best Cowboys Have Chinese Eyes’ (1982). But in this live set, the Ace Face is centre-stage with vocal authority and assurance, filmed in Cannes for German TVs ‘Rockpalast’ on 29 January 1986 – now issued in a CD/DVD pack. In white buttoned-up shirt and black jacket – with grimaces, gurning and trademark jump-kicks, it might be a more matured anger, but it’s still as spring-loaded. He does a bruising take on Daltrey’s album track “After The Fire”, makes the mistake of using wrong guitar for “The Sea Refuses No River”, and does what for anyone else would be considered Dad-dancing for the title-song. But beneath the tight dynamics, he retains that same ambition, as if there’s something yet to prove. The set is built around his concept album ‘White City: A Novel’ (1985), with all-star big-band back-up including a ‘very interesting guitar part’ on “Give Blood” by ‘special guest’ Dave Gilmour – who adds a long loose “Blue Light” from his own catalogue, plus Rabbit Bundrick from Free and Medicine Head’s Peter Hope-Evans on wailing harmonica. Pete’s spidery “I Put A Spell On You” is included on the DVD only, while naturally he throws in a fat-free solo “Pinball Wizard” and ‘another old Who song for you’ “Won’t Get Fooled Again”. He wrote them. He sings them.
Published in:
‘R2: ROCK ‘N’ REEL Vol.2 Issue 62’
(March/April 2017) 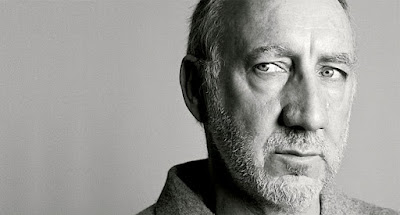 Posted by Andrew Darlington at 12:41

Escort girls in Delhi make independent Brahma; Delhi call girls are always ready to serve you for interested people. Call girls in Delhi have been placed in many categories. Surely we are available according to you, you can come on our website and contact us. Delhi Escort Service

Welcome to Gurgaon Escort Service. We provide one to one sexiest girls and provide cheap service rates. You can visit our website to take advantage of the service. Cheap Escort Service In Gurgaon