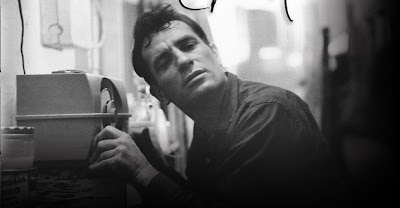 On the road, accelerating into overdrive, destination board set to FURTHER, trailing necrophile clouds of glory from its stylishly-rusted exhaust, the Dead Beats industry has seldom been so hyperactive. It’s accumulated renewed momentum since the 1974 publication of Ann Charters’ tentative biography ‘Kerouac’ (Warner Paperback Library). That monumental tome carved out a four-hundred-plus-page archaeological-sleaze survey that succeeded in achieving energy levels sufficient to pass massive voltage through temporarily dormant hipster Beatnik memories, and shove them from subsurface into kitsch collectability. Novelist Jack Kerouac, who died 21 October 1969, was the thinking eye of the Beat Generation, slouching rootlessly into Frisco from New York, from Lowell to Mexico City, travelling cross-continent high on visionary jazz and Buddhist bohemia. His was the gift of complex simplicity. His roaring Bop prose illuminated his ragged milieu and embryo subculture in an adrenalin rush of emotionally-charged verbals. He was both technically innovative, and – through boozily emotive imprecision – relentlessly accessible to the non-schooled non-technical reader. 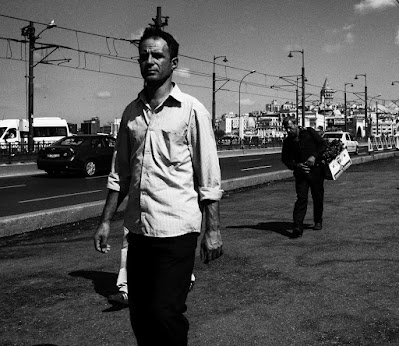 Everyone from Bob Dylan to Tom Waits theft their best affectations from ‘Old Angel Midnight’ Kerouac. Yet his appeal is not, strictly, rational – but intuitive. He lived his language too closely for detachment, while simultaneously his personal weirdnesses and unresolved ambiguities cut it loose from strict reportage. The contradictions in his work are the same contradictions that drove and destroyed him. Let me count the ways. As a human being he was a mess, primed to self-destruct, a wino, poet, bum, intellectual, an American doomed anti-hero of romantic melancholy darkness – and a slob. Personally charismatic, unkempt and moodily handsome, his ‘Beat’ was abbreviation for ‘beatific’, fiercely at odds with Normal Mailer’s ‘White Negro’ manifesto of existential hoodlum. Imprinted by early Catholic guilt he had a yen for Zen that he lacked the application to ever consummate. 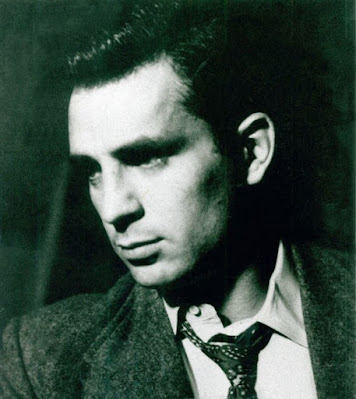 But there’s more. Too many cross-references attest to his shyness for it to be pose, to his edgy moral Puritanism and macho traditional values for them to have been insincere. But just as legion are the legends of his multi-sexual promiscuity. Gore Vidal brags of being recipient of a Kerouac blowjob, while claustrophobically close associations with Allen Ginsberg, William Burroughs, and Neal Cassady – incestuously sharing women, narcotics, and intimacies – backs up such brags. And if, as Ginsberg claims, Kerouac was never able to resolve the conundrums of his own sexuality, there’s a nagging back-up diversity of support inconsistencies. Kerouac idolised jazz master Charlie ‘Bird’ Parker to the extent of attempting to breath the black musician’s Bop spontaneity into his writing. Yet there’s a tale Nicosia here relates of the late-period Kerouac burning a racist cross outside the Black ghetto of Orlando. If true the act would be obscene if it weren’t so pathetically inept. 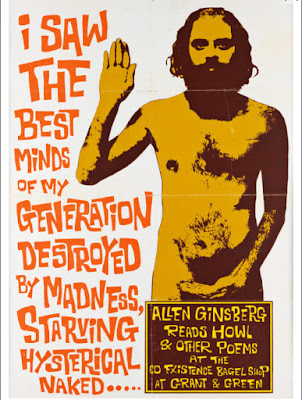 But Kerouac is cult. And following Ann Charters came the deluge – Dennis McNally’s ‘Desolate Angel’ (1979, Random House), autobiographical data from daughter Jan Kerouac (‘Baby Driver’, 1981, St Martin’s Press), ex-lover Carolyn Cassady (‘Heart Beat’, 1976, Creative Arts Books – which became a 1980 Sissy Spacek-Nick Nolte movie!), and fan acquaintance Joyce Johnson (‘Minor Characters’, 1983, Houghton Mifflin), then there’s Beat archivist journal ‘Moody Street Irregulars’, the ‘Beat Brotherhood’ cassette-label from Birmingham, and an ongoing small-press multiverse of Xerox and offset typescripts intent on preserving each minutiae of the mythos. Nicosia’s massive and obsessively-researched book (ten years in the compiling) is the culmination of the tsunami – so far. Critical – but to a degree, it’s the definitive primer for potential Kerouac converts, a crash-course taster in Beat-ology, as well as an essential purchase for those already Beatphiles, documenting life, work, and the tangled inter-relationship between the several. 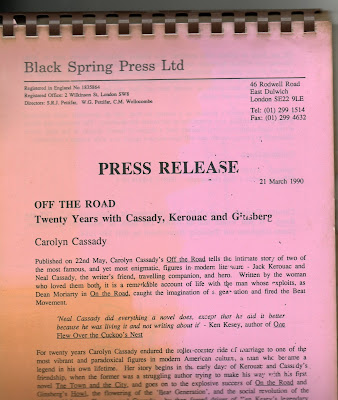 The problem with cults – whether dedicated to Duran Duran or James Dean, Elvis Presley or James Joyce – is that they invariably obscure with overkill the real value of the sacred object of their deification. Cults polarise opinion and create critical backlash by myopically overstating their case with unqualified fervour. Viewed objectively, the later Kerouac could be maudlin, over-sentimental and reactionary, but at his best he has few equals. ‘On The Road’ (written 1947-1951, published 1957), ‘Desolation Angels’ (written autumn 1956 to summer 1961, published 1965), ‘Dharma Bums’ (written November 1957, published 1958), ‘The Subterraneans’ (written 1953, published 1958), and ‘Big Sur’ (written October 1961, published 1962, which Nicosia inexplicably relegates to minor novel status) still speak in tongues. Written by feeding Telex-rolls into his typewriter, feeding his head on Speed and Bennies, and working furiously on solid red-eyed sleepless eight-ten jags, he wrote with the fluency and breath-punctuation of immaculately stoned rap, introducing the use of paragraph-long sentences studded with multiple adjectives to each noun. Technically such strategies unravel all wrong, but poetically and evocatively they come so right they’re stunning. He lifts prose from flat two-dimensional passivity and MAKES IT DANCE. For a new writer – that’s a method that can’t be ignored. For a new reader – that’s an addictive strategy that’ll terminally suck in the unwary.
‘Memory Babe’ is contagious. It’s a milestone on the Beat Route. It should not be missed. 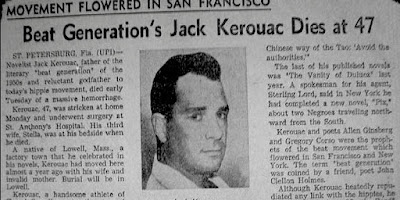 Posted by Andrew Darlington at 13:59