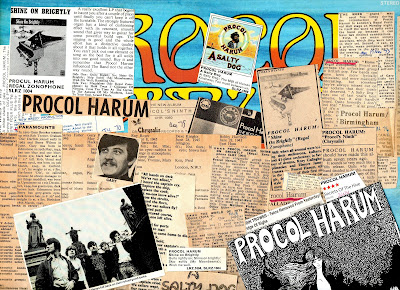 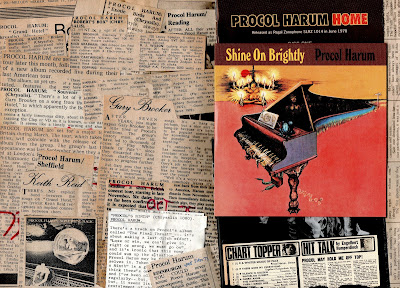 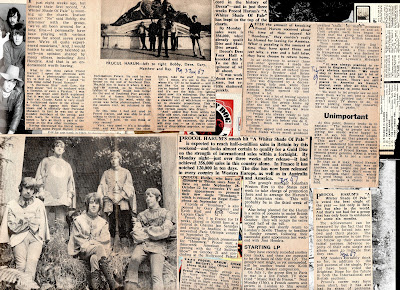 John Lennon had his psychedelic Rolls Royce fitted with a record player, so throughout the Summer of Love he could play “A Whiter Shade Of Pale” repeatedly to anyone who’d listen. The lilting surreal Bach-based single skipped the light fandango everywhere. Its massive success turning such cartwheels that it wasn’t until January 1968, following a line-up and label change, that the former-Paramounts managed this underrated debut album adorned in florid monochrome Aubrey Beardsley-style art, now re-mastered with bonus tie-in singles. Yet it contains literary-ambitious Gary Brooker-Keith Reid keyboard-led stand-outs such as “Conquistador” – a 1972 hit in its own right with live orchestration, and the beguiling “She Wandered Through The Garden Fence”. Despite its single “Quite Rightly So” barely registering chart-wise, the second LP (December 1968) is an even more dazzlingly flawless set. The vinyl second side structured into the esoteric seventeen-minute suite “In Held Twas In I”, shifting from vaudeville through balladry into heavy Rock adorned with stately pseudo-classical twiddly bits. Their distinctively English qualities of wit, intelligence and confidently obscure poetic lyrics stand up to repeated listening, while the group were vindicated by ‘Salad Days’ of recording and touring successfully until 1977.
Published in:
‘R2: ROCK ‘N’ REEL’ Vol.2 no.53
September-October (UK – September 2015) 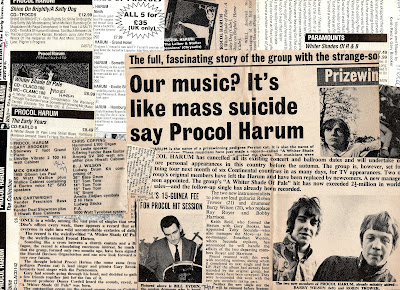 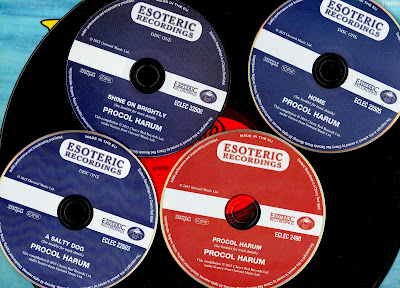 I could pen a dissertation about ‘A Salty Dog’, in fact, I probably will. About how, when other Prog-Rock units were cranking up their tedious virtuoso soloing into mind-numbing improvisations, Procol Harum simply lift a quill from romantic poet Samuel Taylor Coleridge’s narrative epic about a damned voyage to ‘parts unknown to man’ where ships come home to die. I bought the single after hearing it on the radio – maybe Peel? and although it barely rippled the charts, subsequent long-tail sales and critical reappraisals have deservedly elevated it to classic status. For the title track of this, their third album, they abandon the playful obscurantism of skipping light fandangos for a song rifted with literate wit and puns, laced with spectral pizzicato strings as stately and doom-laden as the Ancient Mariner’s accursed vessel itself. From ‘all hands on deck, we’ve run afloat’ – ships don’t run afloat, they run aground, accompanied by a ‘piped aboard’ instrumentation, through ‘how far can sailors fly?’, to close with the legal document testimony ‘you’ll witness my own hand’. In a show of bravura, Brooker-Reid even flourish the oldest cliché-rhyme in the songwriter’s arsenal, ‘many moons and many Junes’ with casual assurance. Mournful gulls wail, waves lap, the Captain weeps as they ‘fire the gun’ and the mast burns, and it’s all spine-shiveringly unique. The nautical theme, suggested by the pastiche ‘Players Navy Cut’ cover-art, continues with “Wreck Of The Hesperus”, then there’s the stand-out “The Devil Came From Kansas”.
As part of a trilogy of lavishly packaged digital reissues – alongside a 3CD ‘Shine On Brightly’ (1968), and fourth LP ‘Home’ (1970), each definitive edition is expanded with a bonus CD of outtakes and radio sessions, lyric-poster and memorabilia. Procol Harum may be an acquired taste, but every now and then they’re a taste very much worth acquiring.
Published in:
‘R2: ROCK ‘N’ REEL’ Vol.2 no.54
(Nov-Dec) (UK – November 2015) 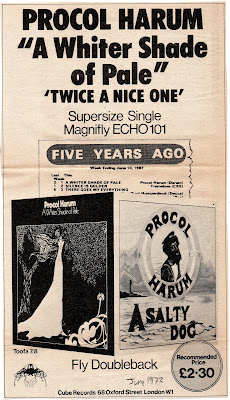 Posted by Andrew Darlington at 14:46

Are you heartbroken or thinking of how you are to live the rest of your life with Herpes? I'm here to tell you to cry no more, for Dr Osato is here to help you with the cure for herpes. I was diagnosed with genital herpes in January this year and I have been searching and asking questions to see if I could get something to cure the disease because I did not believe what the doctors say that no cure is found yet. I came across a comment on Youtube and the person testified how she was cured from herpes1&2 after using Dr Osato herbal medicine. I quickly contact Dr Osato on email and explain my problem to him and he prepare the herbs and send it to me through UPS and gave me instructions on how to use it and tell me to go for checkup after usage which i did after two weeks of taken the herbal medicine and my result was NEGATIVE  and my doctor confirm with me that am completely free from herpes. I'm so happy and grateful to Dr Osato for curing me from herpes and I will continue to share this for people out there to know that there is a cure for herpes. Dr Osato also has the cure for different types of diseases and viruses like HERPES, HIV, HSV1&2, DIABETES, CANCER, VAGINAL INFECTION, HPV, Sickle Cell, BLOOD PRESURE Cold Sore ect. You can contact Dr Osato on email and WhatsApp.... Email: osatoherbalcure@gmail.com or WhatsApp +2347051705853. His Website is osatoherbalcure.wordpress.com

Dr Osato herbal medicine is the best remedy for herpes and you can contact him today to get cured.