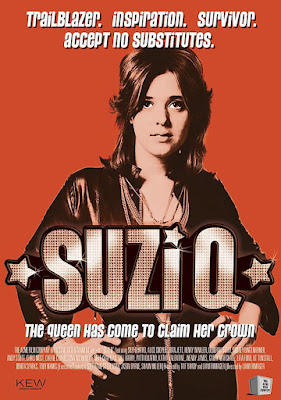 SUZI Q!
DVD Review of:
‘SUZI Q: TRAILBLAZER.
INSPIRATION. SURVIVOR’
by SUZI QUATRO
(2020, Acme Film Company)
www.suziqmovie.com
Dale Hawkins did the original Rockabilly ‘Susie Q’, which the Rolling Stones and Creedence Clearwater Revival later revived. Growing up in motorcity Detroit young Susan Kay Quatro was probably familiar with the song. Always a solid bundle of rocking energies, it was brother Michael who set up her audition for Mickie Most at Motown’s Studio A. Signed to Rak Records she was supplied with suitably nonsense hits written and produced by the Mike Chapman-Nicky Chinn team, to become inescapably part of the 1970s chart machine. She wore ‘Barbarella’ leather because she’s an Elvis fan, but the ‘Top Of The Pops’ image tells only part of the tale. Tributes from Alice Cooper, Joan Jett, Deborah Harry, Wendy James and others testify to her influence – as leading the first female-fronted Rock band, and her enduring presence persists. Wielding a bass-guitar that weighs more than she does, the trade-off for a life lived on the road since age fourteen is family and marital issues. Divorce from solid husband-partner Len Tuckey – former guitarist with Nashville Teens (from 1969-1973), and problematic sister-moments, including with Patti who went on to join Fanny. Here, she sets out to redress the balance. Don’t underestimate her. Watch the DVD story. As her 2019 ‘No Control’ album indicates, Suzi Q was always a Rocker at heart, and is at her best writing her own material. All she demanded was that the world ‘let me be who I am.’ She would accept no compromise on that.
(The DVD bonus features include an interview with Liam – not Gallagher, but director Liam Firmager)
Published in:
‘RNR Vol.2 Issue.80 March-April’
(UK – March 2020) 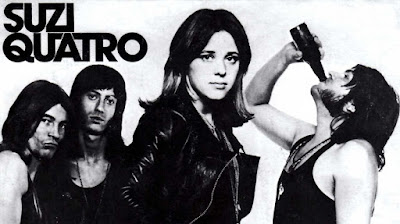 Posted by Andrew Darlington at 11:19

Hello, my name is Freeman. I found a new and secure way to invest and make profit which I will like to share  with you, you can check it out and also share with your friends and family.
Have you heard of MARKETPLUS247 . COM  ? I was talking with a friend who also tried out this platform few weeks back, made about $2,000 profit after a short period of 3weeks. We talked about it initially, while his funds where in growth and I advised him against being scammed because I did not believe. Right now I am proud to tell you that Marketplus247 . Com has saved me my cash and helped me make an extra profit almost as much as my savings. Marketplus247 . Com  has indeed proven to be safe and secure. Check out the website for option and instructions towards the process of investment. Take a step pf faith and you will not regret it.

"I want to share my story with you. I have gone through a lot of heartache, pain and suffering. This is because I was lied to by someone who knows me well and took advantage of my trust in them. Over $20 million was stolen from my Coinbase account in Bitcoins and Ethereum but thanks to these guys at Asset recovery firm (claimpayback) Where i got a reputable funds recovery triangulation specialist to help me get back my lost funds. i immediately opened a case with the smart contract developers at claimpayback after i was directed by kravitz hein their smart contract customer support on claimpayback.com platform and they eventually came to my aid."