'Jeff Hawke: Titan Of The Spaceways' 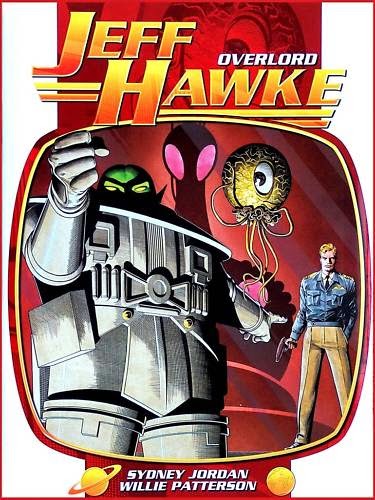 JEFF HAWKE:
‘TITAN OF THE
SPACEWAYS’

The classic JEFF HAWKE science fiction picture-strip ran in
the ‘Daily Express’ from 1954 to 1975. Now ‘Titan Books’
have produced two lavish collections of stories from the series.
ANDREW DARLINGTON explores the books and examines
the fascinating history behind them…


My paper-round took me through the ‘Profumo Scandal’, ‘The Great Train Robbery’, and the early American Gemini space-shots – roughly 1961 to 1964. Reading door-to-door I got pretty-well genned up on such topical events while elsewhere, though I confess I also followed ‘Garth’ regularly in the pre-Maxwell ‘Daily Mirror’, my favourite daily picture-strip fix was ‘Jeff Hawke’ in the pre-tabloid ‘Daily Express’. Just three meticulously executed frames a day could rock my fervid adolescent imagination through dark infinities of space and vast eternities of time in the company of comicdom’s most intoxicatingly bizarre creations – Tallid The Reasonable Fish, Crab Creatures from the Crab Nebula, the mischievously evil Chalcedon, the nervously apologetic single-eyed Kolvorok, Ramedd-Flaa the ultra-entity – who contains the blueprint of all galactic life-forms, and much more – a querulous, bickering, bombastic, cowardly and ludicrous menagerie of beings with beautifully conceived biologies and irresistible characterizations.

‘Jeff Hawke is the best science fiction strip EVER’ opines Dave Gibbons – artist for ‘Doctor Who’, ‘Dan Dare’ and ‘Rogue Trooper’, ‘the rich complexity of its writing and artwork are unsurpassed.’ Of course, he’s correct. An alien sphinx that doubles as a starship? A kidnapped Loch Ness Monster abducted and taken to mate with a similarly endangered species on another world?, and always the fascinating overlap between ancient mysteries and future terrors. Hawke’s creator – Sydney Jordan, describes his favourite tale, “The Immortal Toys”, as one that shifts from a ‘Spielberg-like opening sequence, where the latest in Edwardian technology is set against a science infinitely older,’ to a storyline that moves ‘effortlessly forward in time, so that we are reminded how transient the term ‘latest’ can be when applied to scientific progress.’ Heavy stuff. Yet hugely readable. 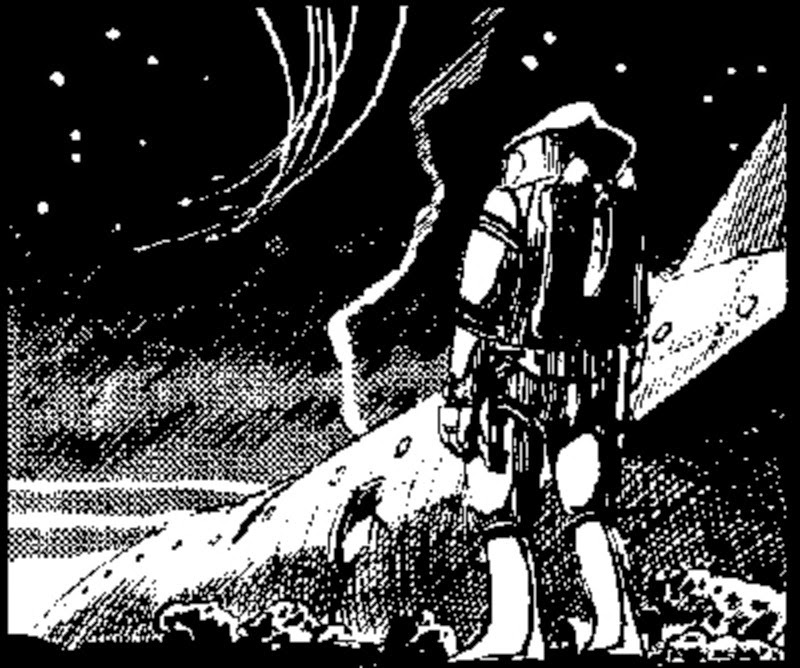 Wing Commander Jeff Hawke was launched just four years after Dan Dare had exploded ‘Eagle’ into national mythology, and – like Dan Dare, sometimes used photogenic sessions posed by professional models for art reference. ‘The discerning may recognise, from my drawings of Hawke, that I used Hans Meyer as a model – he was later to be cast as the sympathetic Hauptmann Ullman in the BBC-TV series ‘Colditz’.’ Sydney Jordan, a skilled graduate of the Aeronautical Technical School in Reading, worked on ‘Dick Hercules: Sixth Form Muscle-Boy’, going on to invent and run Jeff Hawke, which he did from 15 February 1954 – with a story called “Space Rider”, until 1 November 1975, by which time syndication had spread its readership to the ‘Scottish Daily News’ and beyond, into foreign translations. Re-runs and reprints have continued across the years since, in – for example, the ‘Huddersfield Daily Examiner’, while two lavish eighty-eight-page collections ensure Jeff Hawke’s idiosyncratic exploits are now available to a new generation, alongside Titan Books more contemporary titles. And Jeff Hawke stands up to such comparisons remarkably well. 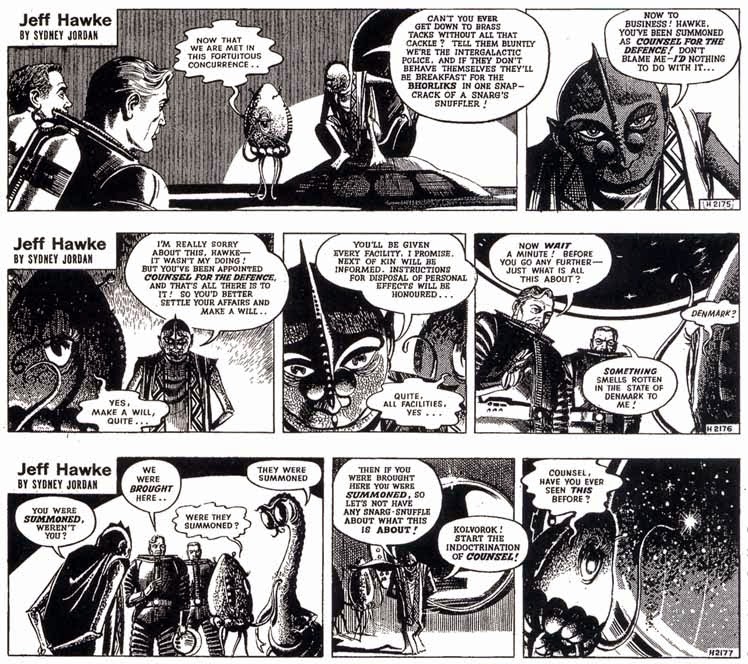 If Jeff Hawke was blonde and sometimes wooden in the way 1950s Space Heroes were expected to be blonde and wooden, then it was the strong alien characters, and the sophisticated plotting skills – courtesy of Sydney Jordan and his most accomplished collaborator – the late Willie Patterson, that lifted the strip into overdrive. With a mixed target audience on up to adult ‘Daily Express’ readers, they could afford to pitch narratives at a number of levels, with each tale prefaced by playful dialogue from a Greek chorus of demonic commentators. ‘What you are going to see will be VAST’ promises Mephisto in one such prologue, ‘no trifling with the universe here. I will show you great ships and astonishing creatures… but that will be only the beginning.’ 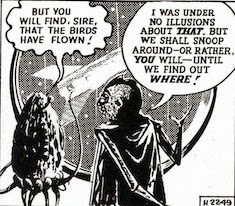 “Counsel For The Defence” satirically explores the labyrinthine legal codes practiced in Galactopolis, the planetwide city-hub of a star-spanning empire that is inventively visualised by Jordan’s ‘tight, technically claustrophobic’ art. While “Pastmaster” features Ap Tiryns, a meddling time-travelling interloper from 30,000AD who materialises into a 1989 Luna base. Tiryns is intent of restructuring history, but is himself pursued by ‘Time Guardians’ who eventually snatch him the moment BEFORE he first appeared on the Moon – so ensuring that the entire story is wiped clean and never happens! I’m not sure how I managed to digest stuff like THAT on a day-to-day door-to-door paper-round basis, which makes it so much better to have these stories in book form.

The detailed checklist in the second volume reveals that Harry Harrison – SF superstar creator of ‘The Stainless Steel Rat’, co-wrote a 1957 Jeff Hawke story called “Out Of Touch”, while ‘2000AD’s ‘Judge Dredd’ artist Brian Bolland inked for the series final syndicated adventure, “Heir Apparent”. But such intriguing connections fail to detract from the joint achievement of fellow Scots Sydney Jordan and Willie Patterson in creating and sustaining Jeff Hawke through the two fantastic decades these collections draw renewed and timely attention to (devotees can locate even more tales reprinted in lavish issues of ‘Jeff Hawke’s Cosmos’ through the excellent ‘Jeff Hawke Club’). Even in movie form the Profumo romp (‘Scandal’, 1989) and Great Train Robbery lark (‘Buster’, 1988) now appear seriously dated. While Jeff Hawke still looks as sharp and dangerous as tomorrow. 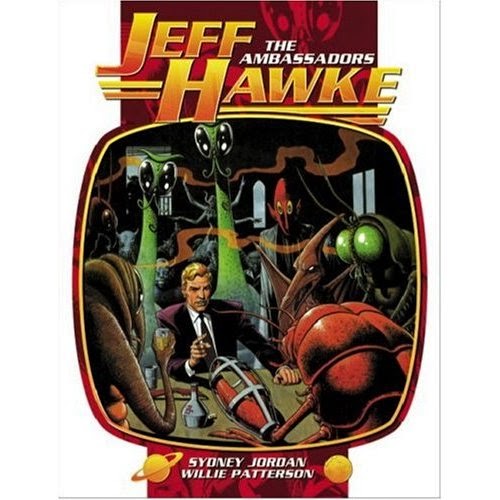 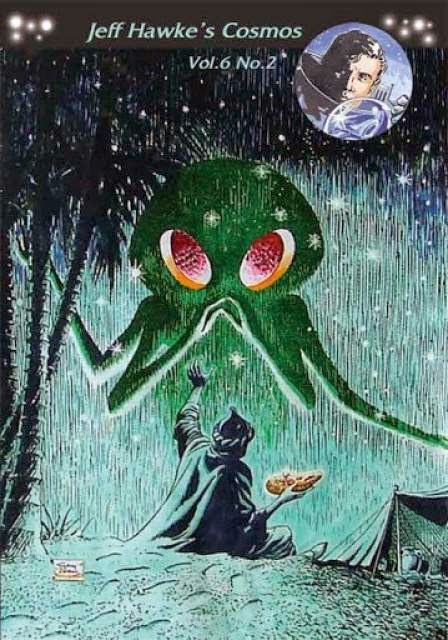 http://www.jeffhawkeclub.com
Posted by Andrew Darlington at 19:39

Get professional trading signals delivered to your cell phone every day.