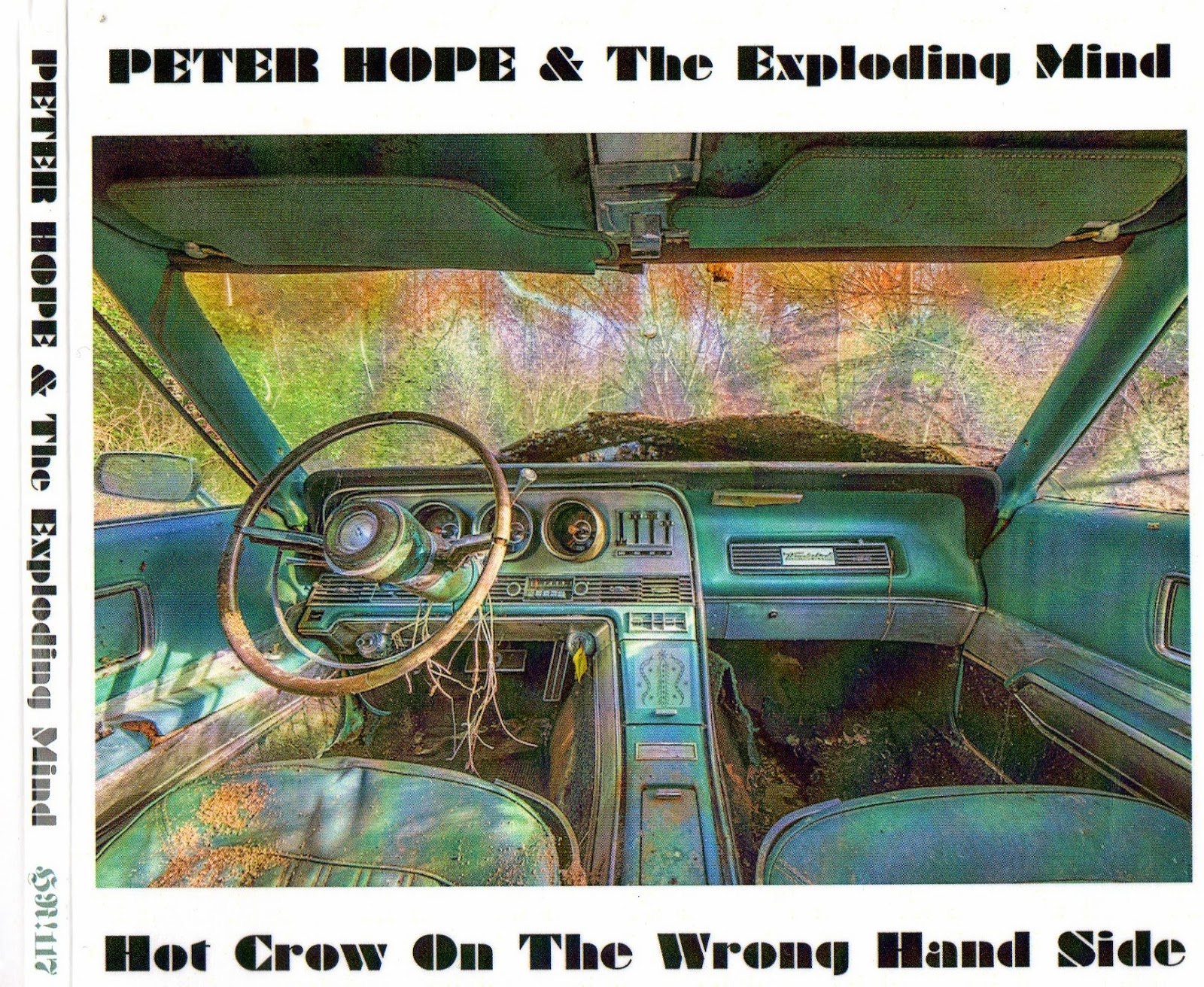 Album Review of:
‘HOT CROW ON
THE WRONG HAND SIDE’
by
PETER HOPE & THE EXPLODING MIND
(Wrong Revolution) www.wrongrevolution.co.uk

So, sometimes you despair. Sometimes you wonder where the next great soundwave is coming from. You listen around where fads flash and fade, rejoicing in the stupid things, and it’s not good. There’s some extreme confrontational electronics from eastern Europe which strives to reconfigure your faith in experiment, and some of it can be scarily powerful. What it lacks, let’s lay it down here, is vox. There’s lots of pale white angsty Ian Curtis alikes and some clean pure female vamps that adequately do what they’re supposed to do. But when it comes to VOICE, what it needs is Peter Hope. Those who delve into other lifetimes will recall Sheffield’s Box and know just how shattering he can be. At that time, critics strove for descriptive analogies through Captain Beefheart to Howlin’ Wolf, and sometimes yes, that’s undeniable. Even this CD title has a Van Vliet handful of magic beans flavour to it on your tongue. But it’s deceptive to merge reflections by wandering too far down that zigzag route. Peter is his own man, transcending deeper into sonic darknesses, into other modes of alien absurdity, pressing matters and sequencers.

Listen – “Red C” is grating biting-on-wire electricity, ‘she was ahead of her time’ or maybe a head of her time? Soldered into ear-corroding circuits where colours run and heat-throbs skitter. Originally a digital download with lost track “Parasites”, from Sheffield 2001, overlaid in Vienna 2012, ‘dirty deals and bad cocaine’ pulse in vocal bruises where breaking glass shatters in splinters. Ice-cream for the “Hot Crow” itself has a techno-tribal rawness, with the sound-texture depth of a field-recording where the wind blows forward, and the wind blows back. “Oh Death” shoves gothic voodoo intimations of mortality freighted with ghastly gospel visions. Lord his time ain’t long. 4:00-minutes to be exact, but hot-wired to eternity. “She Talks Wild” is a lurching steampunk machine with plasticine eyes screwed into the dash-flexure like winking valves ticking pulsing and talking blah-blah-blah. Then, an echoing terrorist mask erases identity, to lose face, keep faith, “Deface”, wearing it in, wearing it out. “Up From The Floor” is where the robots dance to post-apocalypse Kraftwerk, leaning forward to look back, fuelled on mutant bio-chemistry from the “Super Love Pharmacy”. These are songs to sing through broken teeth. These are transmissions picked up by NASA’s New Horizon Probe as it approaches the Pluto-Charon dwarf-planet system. From positive to “Negative” is paramilitary snap-beats with Cabaret Voltaire-style sampled ‘work hard’ voice. While the head-ripping talk-over 7:56-minute “Radio Hit” probably won’t be, but ‘try this little test, what’s the measure of your success?’ Radio-activity in the real world is a form of success too.

This Exploding Mind consist of Natascha Schampus (of Naum), DeafNoise anarcho-punk Luna Menta and Mahk Rumbae (who co-writes “Super Love Pharmacy”), recorded in Sheffield and Vienna with external inputs by Richard Barratt (Warp) and Ross Orton (with roots back to Add N to (X)). The nucleus of Hope, Menta and Schampus were there on the previous Exploding Mind product ‘Ex-Auge Gottes Kino’ (2012, Santos Productions), spaced in amongst Peter Hope’s other diverse electro-projects. But concentrate, this voice is not a bartered commodity, ‘Hot Crow On The Wrong Hand Side’ has deep back-brain reptilian roots. It’s a walk beneath starless existential nights closer yet to the perimeter. A moment’s reverent cacophony where pixels breathe and exhale.

Posted by Andrew Darlington at 20:06

If you want your ex-girlfriend or ex-boyfriend to come crawling back to you on their knees (no matter why you broke up) you have to watch this video
right away...