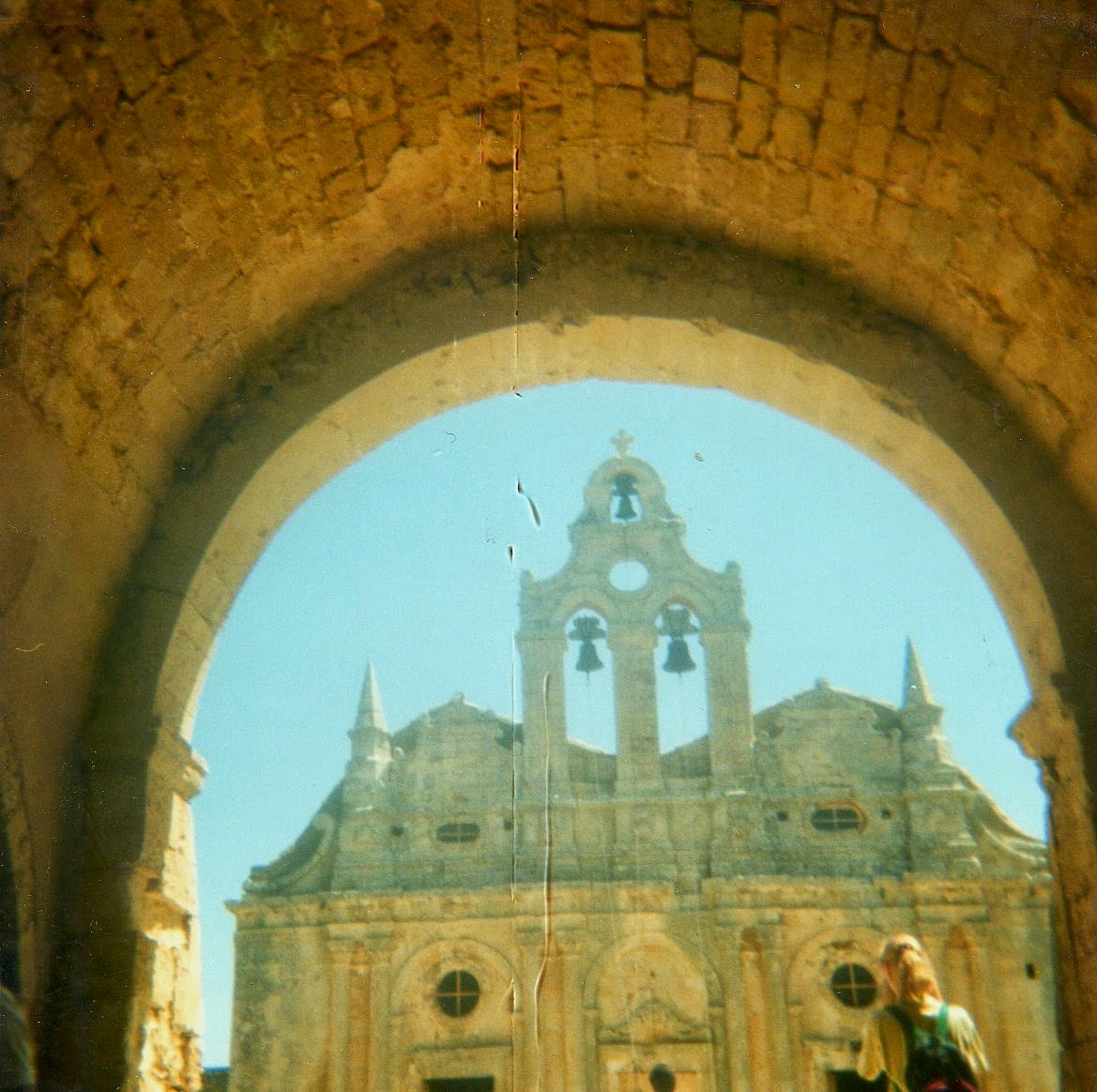 CRETE:
SEX AND DEATH ON
THE ISLAND THAT
TIME NEVER FORGOT

Crete, this magic is no myth. But in 1992, on nightly
TV, death is a spectator sport. And grudges
die hard on an island with a 5,000-year history

Outside it’s heat-blasting in the upper 90’s.

Outside, beat-up cars in the super-heated air orbit a traffic island. Beyond that, the beach.

Explosions of milling TV people throw stones. Some carry blue flags. Cops wield batons and perspex riot shields. There’s tear-gas, and there are shots. The locals begin stamping their feet and shouting at the screen. One of them yells to a friend in a passing cab. The taxi sags to a stop in half-orbit, the guy gets out. He’s built like Bluto from ‘Popeye’, but perhaps his Engelbert Humperdinck moustache is a mistake. He ambles leisurely across to the bar where he gets into the excited pointing, yelling, stamping and gesticulating.

Meanwhile, car horns blast as they veer in a Demolition Derby around the slewed and abandoned taxi, passing on the inside or the outside at whim. 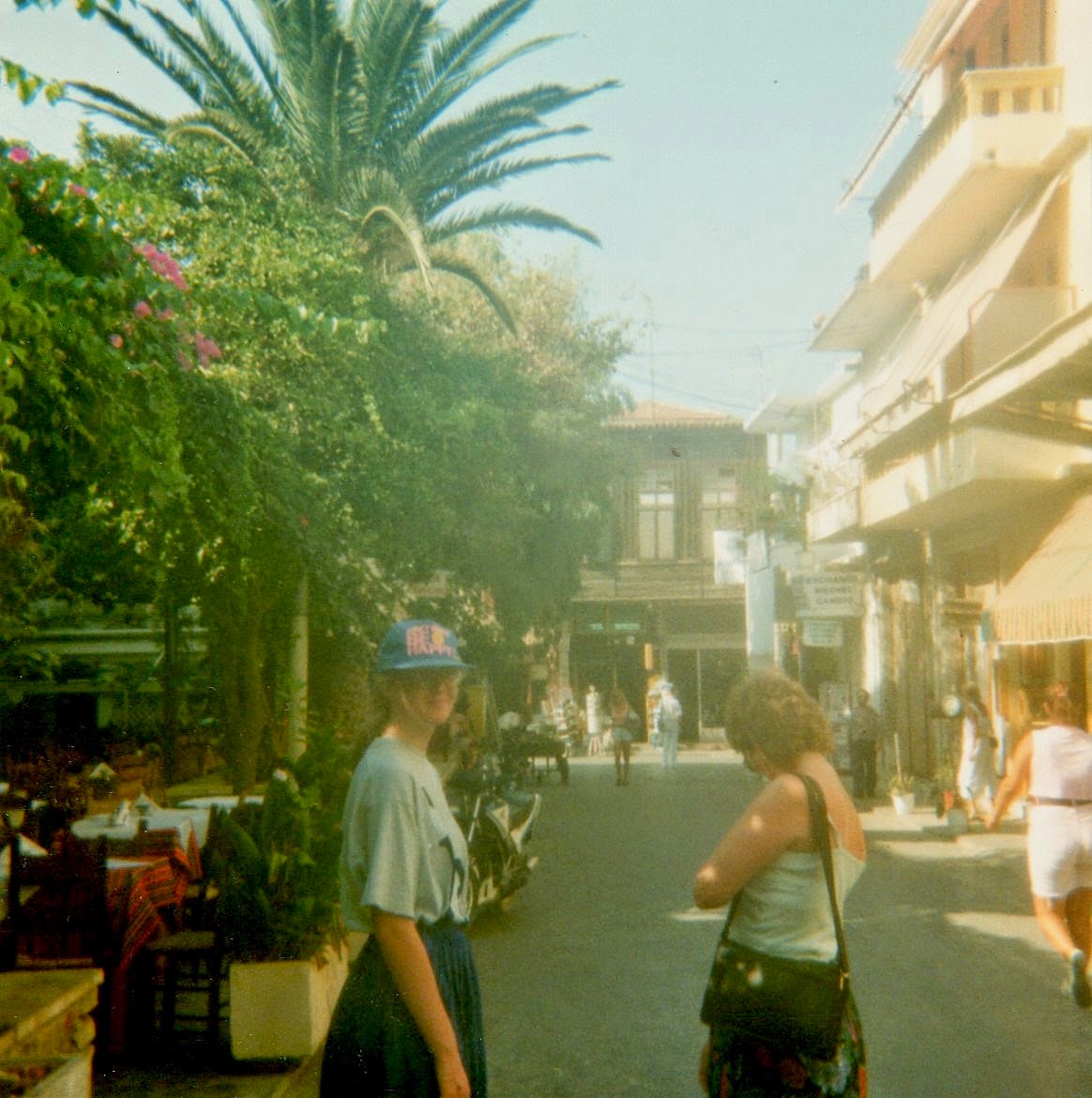 Rethymnon, Crete. On TV, an incident from the Cyprus Green Line. Volatile divide and UN buffer-zone between Greek and Turkish zones of that divided neighbouring island. August. Solomos Solomou, a 26 year-old Greek Cypriot tried to climb a Turkish flagpole to rip down the flag. He was hit five times by Turkish gunfire and killed on prime-time TV. This happened during a massive protest demonstration following an earlier death when his cousin – Nationalist activist Tassos Isaac, had his head beaten to a bloody pulp with staves and crowbars by a Turkish mob. The burial rites needle an already flashpoint situation, becoming a deliberate provocations against the island’s 110-mile faultline partition. There are police and National Guard cordons with circling security helicopters.

The Greek Archbishop Chrysostomos, while making coded appeals for calm, praises the ‘Greek fighting spirit which leads’ the demonstrators, calling them the ‘descendants of heroes and martyrs’. Turkish Foreign Minister Tansu Ciller retaliates by adding ‘no-one lays a finger on the flag. If anybody has the nerve to do that, we will break their hands.’ Neither community admits the possibility of conciliation. The 22-year mutual intransigence is a fact of life. Earlier that year Greek and Turkish forces clash over the ownership of an uninhabited Aegean islet off the Turkish coast. This is cold war in a hot climate. Grudges die hard here. Its TV coverage is a spectator sport.

Crete is a time-sliding foray into multiple levels of pre and post history, from landing at Heraklion where runway flight-path lights are made up of blazing oil-drums direct from Fred Flintstone (‘YABBADABBADOO!’), to an apartment with regular power-cuts and irregular undrinkable water with the consistency of warm sand, where Greek narrow-gauge plumbing means don’t flush toilet paper – place it in the bin provided for collection later. And it’s still stunning. Beyond the balcony, goats, chickens and children scrat while semi-feral cats eat slim green lizards in the kind of picturesque squalor that the Aegean sun makes magical. Dry rusting Martian rocks hold the lean-to roofs in place, but they’re simultaneously drenched in vines and luminous pink oleanders. 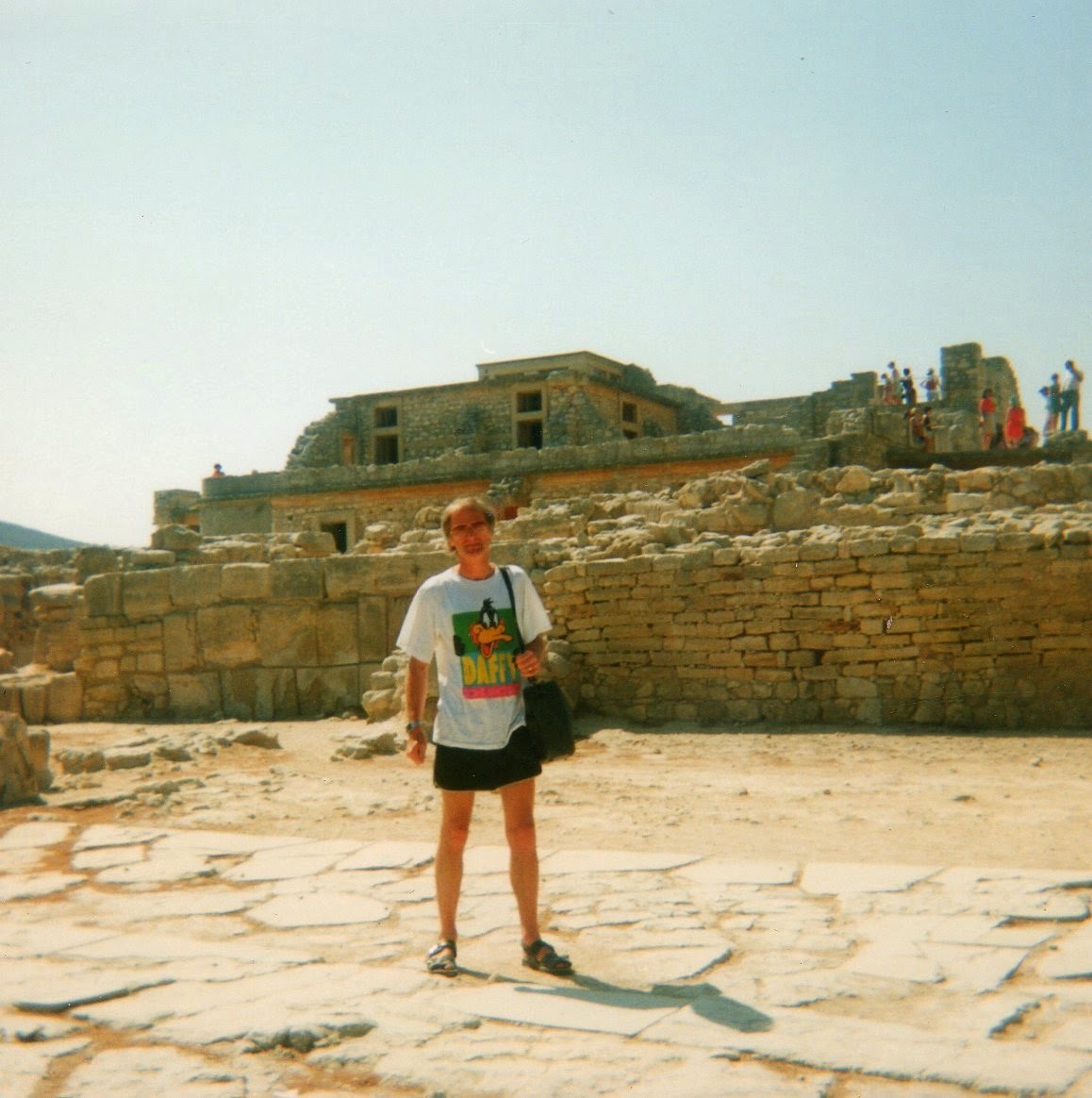 At 250km Crete is the largest Greek island. And the most southern. Next stop that way is Egypt. That way to Libya. It has Hersonissos for Clubbers, where dedicated dancers can, with persistence, find the best Belgian House or Italian Techno, not quite at Balearic density, but enough bpm to sweat to. There’s Aghios Nikolaos for the family touristy thing. And in Arkadi they’ve got the naked skulls of nineteenth century martyrs leering out from the ossuary wall. But I’m in the outer rim of Rethymnon by the darkly romantic warrens of the Old Town. Behind the harbour is a small Roman amphitheatre from something-something BC. It’s still in occasional use for musical or theatrical events. Above the harbour there’s a Venetian Fortress from five hundred or so years later. And built into its highest point there’s a mosque from the Ottoman Turk occupation from 1669. Deliberately sited in a kind of bragging religio-cultural triumphalism, a Muslim monument surmounting a Christian bastion.

When they first brought civilisation north from the Nile towards barbarian Europe, Crete was its most obvious first landfall. Here is where Europe began. Its Egyptian matrix still conspicuous in the exclusively sideways facing figures on the wall mosaics at the Palace of Knossos. This most ancient of strongholds is a Conan fantasy of immense wood and stone. These are the labyrinths, already ancient when Rome and Athens were tribal settlements, where the monstrous man-eating bull-headed Minotaur was butchered by the heroic Theseus. It probably became a swords-&-sandals epic for late-night TV starring Steve Reeves and Minotaur-SFX by Ray Harryhausen. This is a place so old it’s where history dissolves into myth. It’s a Stone Age palace, built into the slope of a hill because they hadn’t yet mastered the architectural subtlety of constructing a second storey above the first. The modest throne room has a modest wooden throne. Something like four thousand years ago the neighbouring volcanic island of Santorini, black sand and white houses, blew itself to pieces – some say giving rise to the legend of Atlantis. Its subsequent volcanic nuclear winter hastened the collapse of Crete’s antique Minoan culture. They’re digging out similar structures on the crescent of what’s left of Santorini. 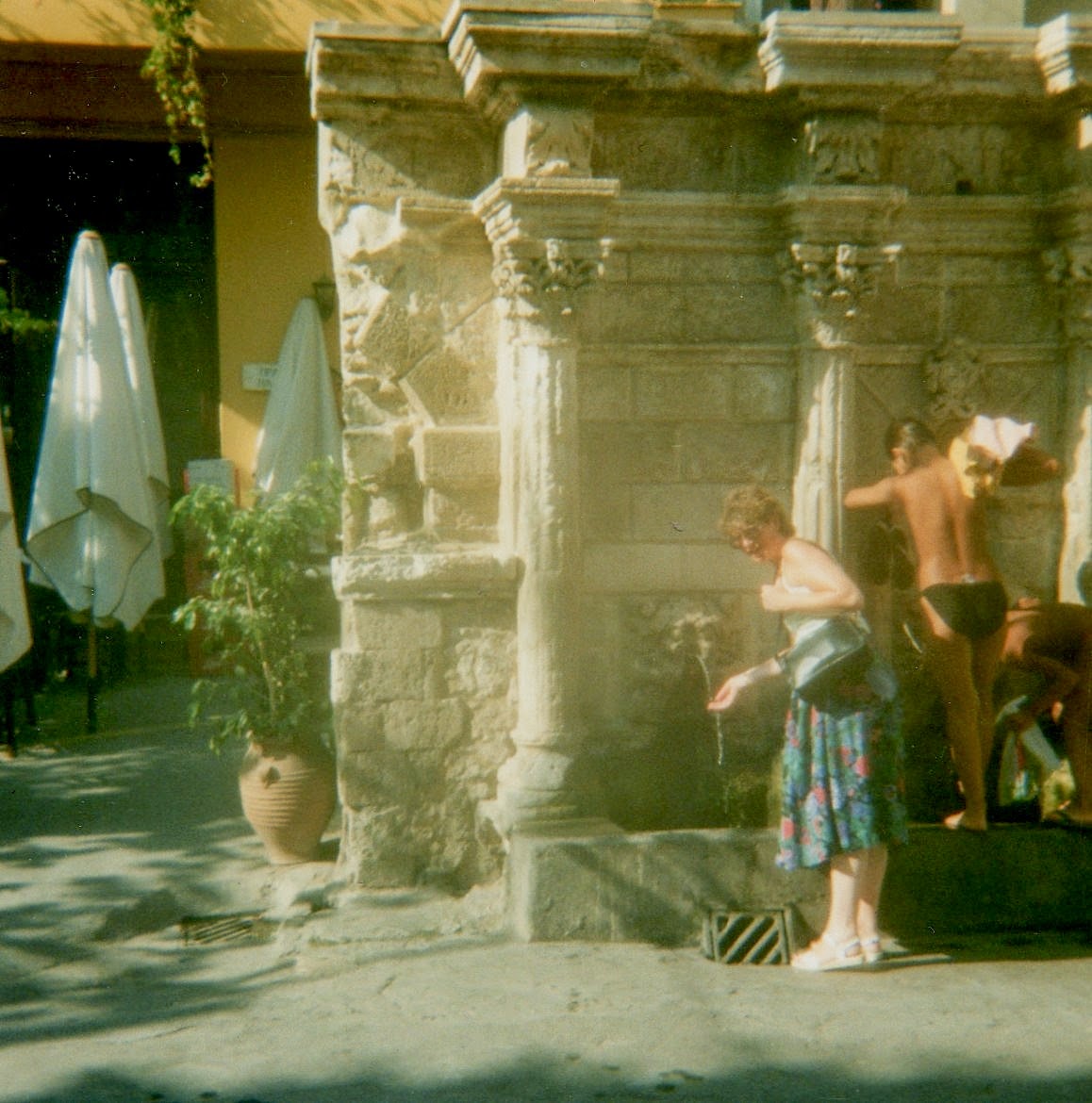 In the eucalyptus shade of Heraklion square, men wear expensive watches, but seldom glance at them. Menu displays outside the Tavernas are all identical, and bear little relation to the food on offer. By the Rimondi fountain just 5km from Knossos, there’s a Quinten Crisp look-alike heavy loaded with expensive gold jewellery. One of Crete’s last Stately Homo’s, he preens and struts with limp-wristed dignity, before taking a camp cappuccino like he’s holding court at some effete soiree. His story must be an equally intriguing one. But hey – the Greeks invented it, didn’t they? Explicit Man-2-Man love is there on the urns and wall-murals, still available in reproduction ‘museum’ copies in most tourist shops. It’s there in Plato’s ‘Symposium’ with Pausanias and Agathon, and in Aeschines prosecution of Timarchus in the fourth century BC. Well – no, they didn’t really invent it. Every culture on the planet did.

But Cretan sexual politics are still in uneasy flux. There are unreconstructed hominoids lounging outside every corner eaterie, strutting macho poses of the most neolithic pre-Feminist kind. And the boringly predictable Mediterranean stereotypes hang out in every bar, working their inexorable knicker-dropping sexual magnetism on English, German and Irish tourists from paler, colder climes. While the Cretan girls exist on an entirely more advanced evolutionary plane, smartly efficient and upwardly mobile. They weave on scooters through the medieval shadows of the Old Town past the leather shops and the luminous jewellers where they negotiate sales of ‘Museum Copy’ Octopus broaches, ear-rings made of Cretan Double-Headed Axes, figurines of the bare-breasted Minoan Snake Goddess, vases decorated with the vaulting bull-dancers of Knossos and priaptic Satyrs. 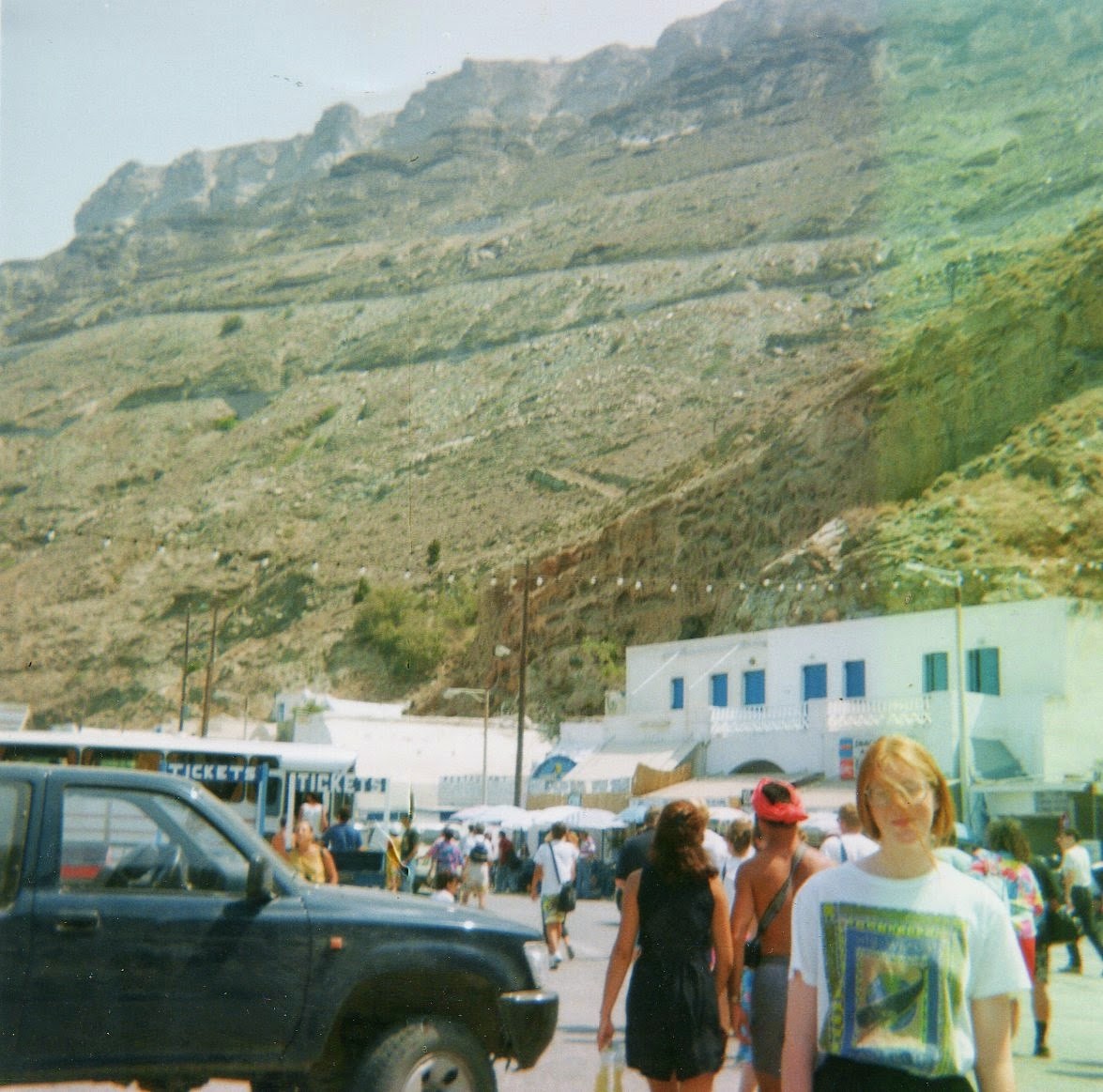 A woman from Wicklow, in her late forty-somethings, is on a menopausal ‘Shirley Valentine’ dream-trip, hunting her dark Tom Conti. A postcard home about it will cost her just 120 GRD (Greek Drachmas). She lounges on the beach showing enough bareable flesh to make several regular-size volleyballs. Her red mosquito-bitten tan defined in glistening strips of painfully successive exposure. She’s playfully tutoring Stefanos, the parasol attendant, in correct Wicklow pronunciations. He exudes athletic horniness, has chest-hair like black palm trees, cut-off jeans, and a cash-belt. He humours her patiently as she flirts ineptly. Then he shoves her lounger rental into his belt and stalks off. She smiles approvingly. He smiles knowingly.

Time only seems to fully up-gear from pre to post-history on the beach. Here there are liquid-dark girls in minimal clothes who make the ‘Baywatch Babes’ look well-overdressed, and enough bare breasts to emphatically prove that all women are not born equal. Just what is the fascination that these quivering protuberances of fleshy fat tissue exert on the vulnerable male psyche? Who knows? Just enjoy. They, the cheap wine, the Tzatziki Dip, the Xifias Swordfish, the veggie Kolokithea Tiganite , the Tsantalis Ouzo – and even the Demolition Derby traffic, all conspire to make new myths rich enough to drown in. 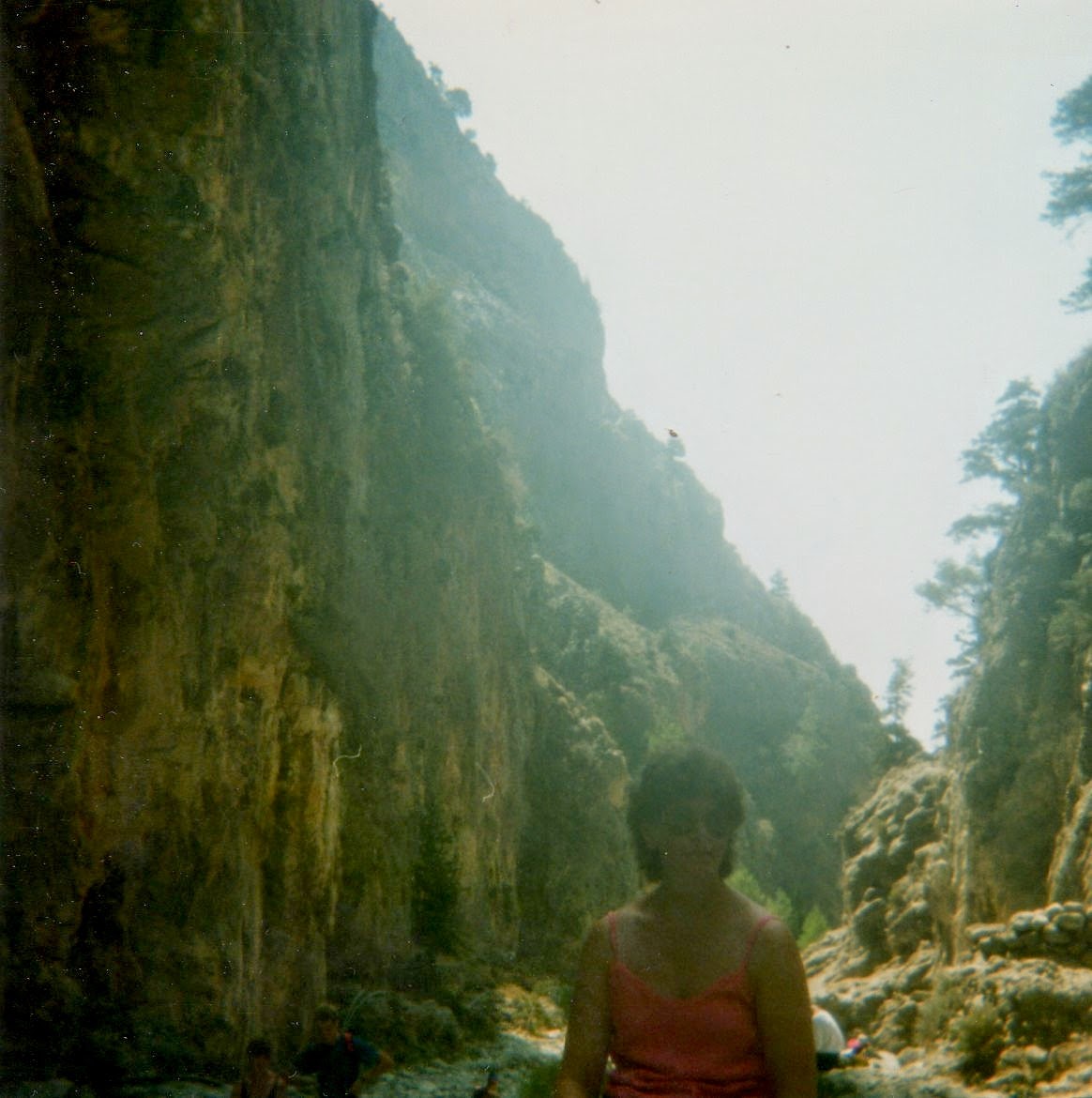 But in the meantime, this is the island that time never forgot. It is now exactly twenty-four hours since this time yesterday. A black crone shoo’s irritably at the German with the camcorder. This is good. She’s shrivelled-up, a wrinkled Mother Theresa with a moustache. He screws his eye harder into the view-finder and zeroes in on her. She sits on a wall of dry stones. There’s a leafless tree above her. And above that the sheer stratification of the Samaria Gorge, a vast Cathedral of Rock. Nature on acid. Here, geological ages are squashed one on top of the other. Scrawny Kri-Kri goats climb in the tree. The German with the camcorder focuses closer. She lops down off the wall to avoid him, hiding her face. She moves away between the goats. He follows her, video raping relentlessly. She scrunches up pebbles and hurls them inaccurately in his direction. This is even better. Action! It’ll look great back home in Düsseldorf.

The Samaria Gorge is 300 metres deep, and – at 18km is Europe’s longest. The hallucinogenic air is pine-scented. The freezing stream down its centre is fed from the flower-filled NW valleys and the rugged White Mountains, including Mount Ida which often stays snow-capped into early spring. 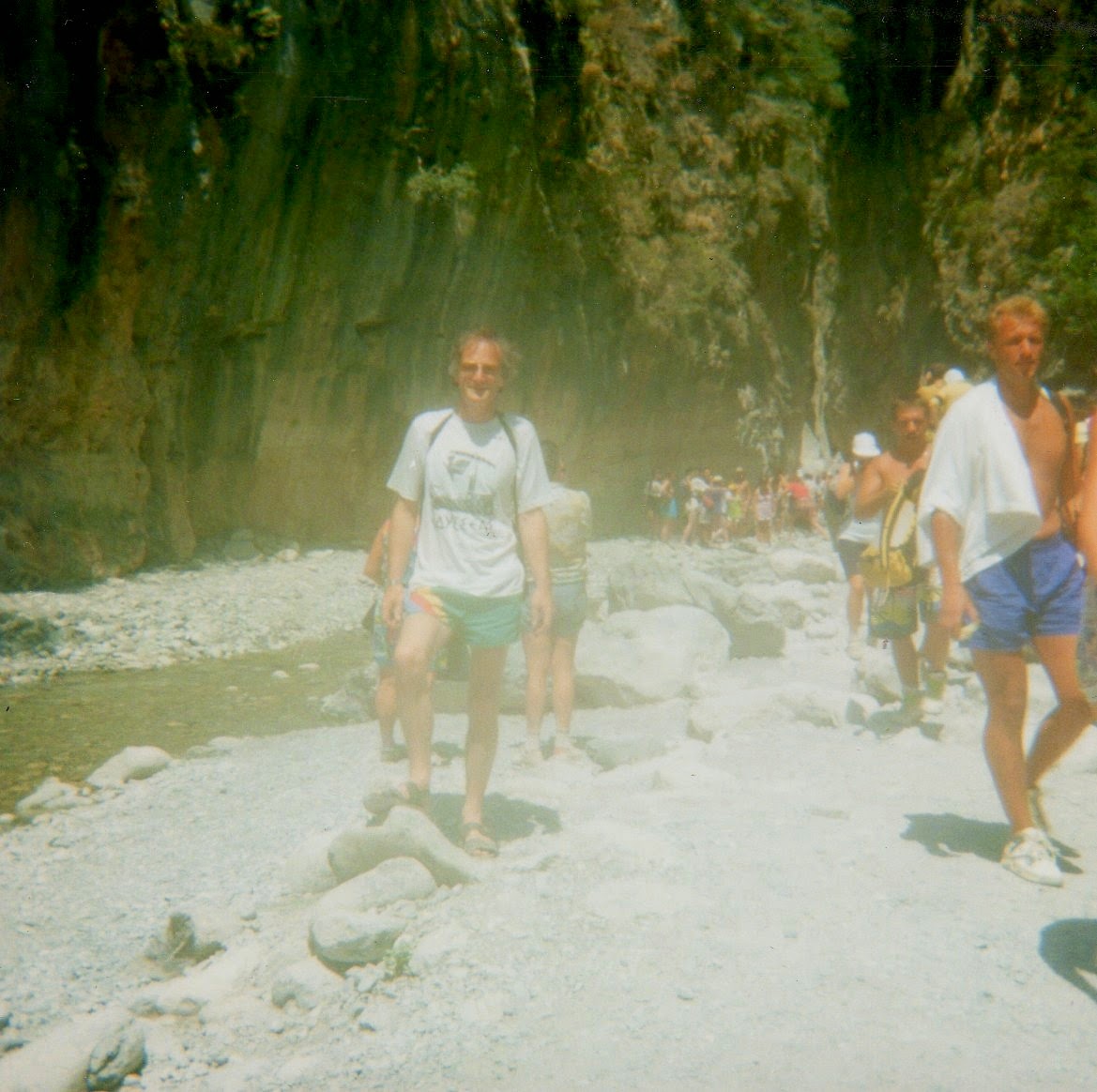 I watch the German video-raping the Cretan crone. The most recent invasion in Crete’s long history and prehistory of invasion (at least, prior to the Turkish attack on Cyprus in 1974 which established the Green Line enclave) was the German airborne assault and mass parachute-drop in May 1941. Grudges die hard here. I feel a strong compulsion to intervene, a kind of ‘hey, leave her alone can’t ya?’, but I don’t. Instead I go back to the apartment where ants crawl across the floor and stranger insects crick and whirr somewhere beyond the balcony, and I write this. Here’s-Backatcha-Kraut! From the balcony, as the sun sets, the dome of the Turkish mosque above the Greek harbour bites an exact curve from its red disc. Probably the alignment is deliberate.

Crete has five thousand years of history. Five millennia. But Greece and Turkey are now joint members of NATO, and may soon be partners in the European Union. Political faultlines and Cypriot Checkpoint Charlie’s may have to be resolved. The alternatives are already spectator sport on nightly prime-time TV.

Two days later, off the long-winded island-hopping ferry at Bodrum, the Turkish customs guy sees my Knossos T-shirt. ‘You like Greece?’ Then snorts a derisive laugh as I nod. ‘Turkey much better!’ Grudges die hard here.

Get all the best spirits and wines on Duty Free Depot!

Professional trading signals delivered to your mobile phone every day.