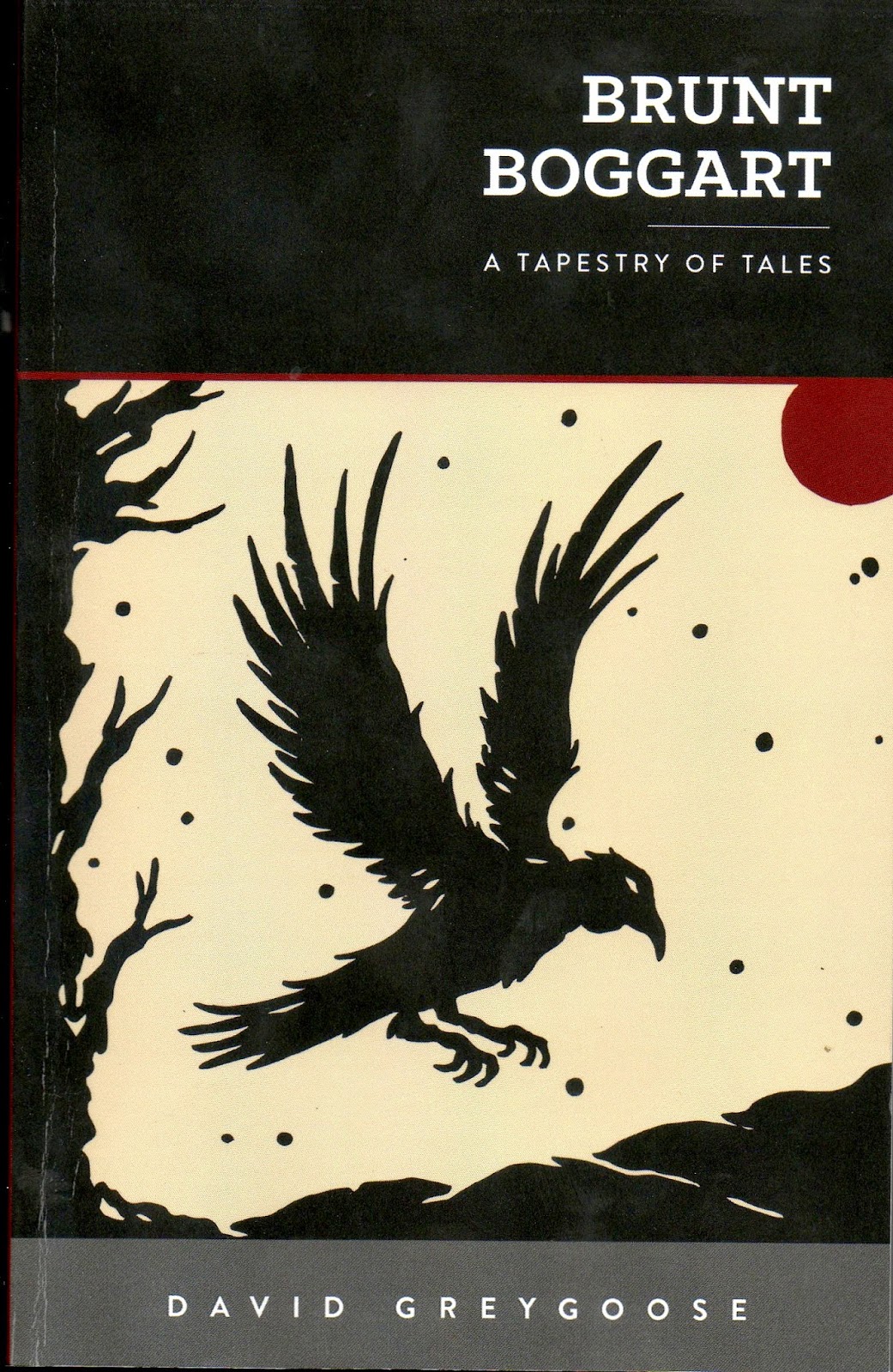 
Let me tell you. Let me tell you… Grimm’s Fairy Tales are sometimes grim. Not always kid’s stuff. There’s menace and nastiness that intimates an otherness about this world, through its fantasies of imagined quasi-worlds. ‘Brunt Boggart’ is not exactly like that. But there are similarities. The village exists in a removed reality, a kind of recognisable medievalism complete in itself, functioning according to its own laws of illogic. The boys-who-would-be-men are called Hamsparrow, Crossdogs, Bullbreath, Scatterlegs, Larkspittle, Scarum, Longskull and Shadowit. Posturing brave, yet scared uncertain. The girlen who dance entrancing rings around them are Riversong, Ravenhair, Dewdream, Silverwing, Moonpetal, Duskeye and Dawnflower. Teasing clever. Who knows what strangeness lies beyond their knowing? What ensorcelled fate lies in wait for the unwary?

Let me tell you… ‘David Greygoose’ sounds like he could be an alias, and yes, in other continuums, the writer is known as Liverpool poet Dave Ward. But neither is Greygoose entirely fictional either, he’s derived from David’s great grandmother’s maiden name. In much the same way that Brunt Boggart has reality overlaps via the rickety-rackety bridge into the netherworld. Here, ribbons night-black are sold for sprinkled secret songs. Dreams are embroidered into scarves of wondrous design. Even the rain is made up of falling stars. The Crow Dancers’ frantic dervish feet whirl to the beat of the drummer by the Fever Tree. The trickster Snizzleslide slithers from Old Mother Tidgewallop’s well as Thunderhead, in his cloak of feathers, counts the moons. And there are tales within tales of the cunning fox who sips hot nettle-tea from fine crockery, or the straw-doll Tom Tattifer who kisses Scallowflax as she sleeps. Nothing as unsubtle as magic, nothing more supernatural than the natural magic of turning seasons, and the ripening of bodies beneath the metaphor-moon of blood. But beautifully melancholy when sad and embittered Oakum Marlroot finds the lumpen stone that is his own crystallised sorrow, which shatters above the grave of his dead wife, releasing them both.

Let me tell you… Greychild – the feral boy they once mistook for a wolf, follows the winding Pedlar Man’s track beyond the village to Arleccra, the city-port he’d glimpsed in the eye of glass, on a quest to find his mother. For a quest is an essential genre device. He meets goose-girl Saffron who riddles sun to moon and moon to sun, the sister reflected in the water, and the enchanted sleepers. He’s trailed by Ravenhair, whose gold brocade shoes dance her to the house of the sea, and by Crossdogs who meets the Changeling Crow-Babe and sees to the edge of the world. But the city where nothing is ever what it seems holds only new hazards and strangeness to seize the reader’s head with dreams. Surreal and symbolist, myth and metaphor, tumbling over and over. It’s happening now, yet it happened long enough ago to forget what we want to remember, and to remember what we want to forget.

Each new skein begins ‘let me tell you, let me tell you’ in the way of confiding a confidence, spinning a tale, weaving a romance in the original sense of the word – to romance, to beguile with fabulous wonderment. A new-old folk-tale to be recited in the darkest midwinter around a log-fire where sparks dance and pirouette in captured constellations. With the rhythms, word-games and language-ticks of oral tradition. Of a romancer – and sometimes a grimmancer too, with troubadour-tellings that take one step beyond imagining. This storybook is a delicious medley of tales that taste as dark as thunder, as sharp as ginger, as tangy as cinnamon. As loaded with dream-stuff as the golden-brown poppy seed. The classification is ‘Young Adult /Adult’, which seems about right. For these are stories with the moon in their eyes and wind in their hair. Let me tell you, let me tell you…
Posted by Andrew Darlington at 22:56