SO YOU WANT TO BE A
ROCK ‘N’ ROLL STAR...
Book Review of:
‘SO YOU WANT TO BE A ROCK ‘N’ ROLL
STAR: THE BYRDS DAY-BY-DAY 1965-1973’
by CHRISTOPHER HJORT
(2008, Jawbone Books, ISBN 978-1-906002-15-2)
www.jawbonepress.com
It’s five decades since “Mr Tambourine Man”, but still the story resonates. Music is not an exact science, but this large-format book lavish with evocative clippings and memorabilia, covers the years 1965 to 1973, with a lead-in back-story and a follow-on ‘what happened next’ chapter, covering pretty much all of the terrain between. All successful long-term bands have a unique chemistry with a shifting hierarchal structure. For the Byrds that was never the case. They were never a garage-band. Nor were they ever school-friends. They all had separate careers, and recording histories, long before they even met. When they initially signed to CBS it was only Roger ‘Jim’ McGuinn, David Crosby and Gene Clark who inked the contract – they were officially the only real Byrds. And they were all singer-songwriter-guitarists with undefined overlapping group-roles, all jostling and competing for the centre ground. In such a light the surprise is not that the line-up fell apart so early, but that it survived as long as it did. Yet, within a matter of months, taking the pulse from the British invasion, but its romantic lyricism from Dylan, they hit massively on both sides of the Atlantic, with one of the decade’s most defining singles. And ‘Mr Tambourine Man’ (June 1965) was the first of their suite of pristine albums. If James Stewart once said that film actors give their audiences ‘pieces of time’, the same thing is equally true of recording artists. They give little two-and-a-half to three-minute singles-length pieces of time that indelibly freeze the moment, the event, the emotion, and that stay with the listener forever. The Byrds provided more pieces of time than most. After “Turn! Turn! Turn!” topped the chart, “Eight Miles High” set the advance tremors for psychedelia, and carried all the way into the San Francisco sub-culture. And more. These are stories that echo down through the years, and they’ve seldom been told better.
Published in:
‘ROCK ‘N’ REEL Vol.2 No.13 (Jan/Feb 2009)’
(UK – January 2009) 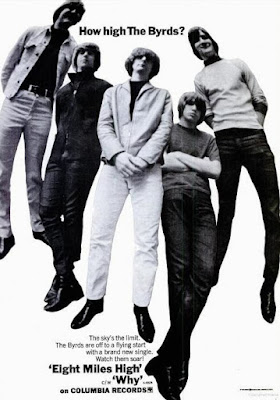 Posted by Andrew Darlington at 19:44