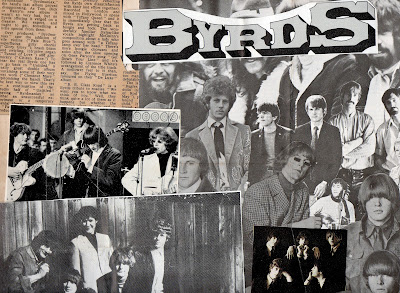 GENE CLARK:
EIGHT MILES HIGHER
GENE CLARK, founder member and main songwriter of the original
BYRDS, toured Britain for the last time in 1985, during which this
interview was taped. He died 24th May 1991, after his return to the States.
This – then, is possibly the text of the last British interview he ever gave...
It’s the trend-blending factor, the mix ‘n’ match motif. With contemporary musics reducing down to one conceptual digital sampler synthesising and liquidising all our Back Pages, it’s inevitable that consumers are going to sniff out something ROOTSIER, something more REAL. So they’re already digging out lost examples of the successful and now highly collectable re-issue labels like Ace and Kent (delivering Soul), Charly and BGO (Blues and 1960s Beat Groups), Blue Note (Jazz) – and Edsel (psychedelia and beyond). Because the incandescence of their collective roster illuminates today’s shadows the way that only first statements can. And let’s leave TV-advertised compilations out of this, OK?
Gene Clark made more first statements than most, and it was only fitting that Edsel should have block re-released four of his albums in a shiny promotional mid-1980s package to meet a groundswell of interest in – and increased demand for his work. A set that seems even more essential today, now that Gene is no longer around. On the early Byrds album sleeves, in promo stills and on ‘Ready Steady Go’ he’s there – basin-cut hair, sharp angular profile, gaunt haunted eyes. A founder member of the band whose rarified stratospheric harmonies and janglipop guitars opened the Dayglo floodgates to all things West Coast esoteric and ultra-Hip. 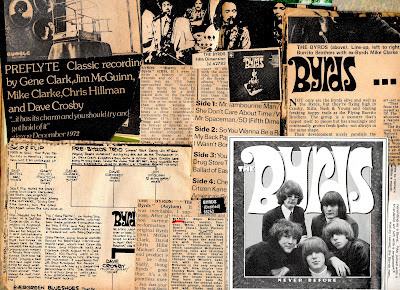 Gene Clark died in 1991. And I well remember the last time I saw him alive. He was playing a supernaturally inspiring gig in the prosperously plush Working Man’s Club atmosphere of the ‘Pussycat’ in Wakefield, Yorkshire. Oddly slotted in as a support spot on a Lindisfarne tour. Backstage the unforgiving white light betrays the odd character-lines, the visible reminders of a quarter-century on the road, but he’s fleshed-out healthy and in good shape. And he’s in a speed-jive motor-mouthing mood, derailing one topic into another, anecdotes to drool over, name-dropping Bob (Dylan), Rick (Danko), Roger (McGuinn), leaving me to pick up the connections like they’re too obvious too explain. Telling me how he got to write the quintessential “Eight Miles High” (a song later revived by as diverse names as Roxy Music and Husker Du). He begins ‘it was me and Brian Jones sitting in a Hotel room on the road when we were touring with the Stones...’
And how come, with Roger McGuinn always the accredited leader of the Byrds, Gene got to write the majority of the original material on the first two Byrds albums? Classics like “Feel A Whole Lot Better” (revamped on single by the Flamin’ Groovies, and then again by Tom Petty) and “Set You Free This Time”. He ducks the opportunity to re-write history by McGuinn-sniping, and explains ‘there’s always been streaks that I have in my life where I’ll write a whole bunch of stuff within – like, two weeks. Waking up in the middle of the night just scribbling stuff down, grabbing my guitar, putting it on tape. Then I might not write anything for ages...’ He’s adept at deflecting compliments too, when I tell him the Byrds are acknowledged as one of the first names to ‘intellectualise’ Rock he dismisses it with ‘a lot of that had to do with Dylan too y’know, and John Lennon...’ A likeable guy. 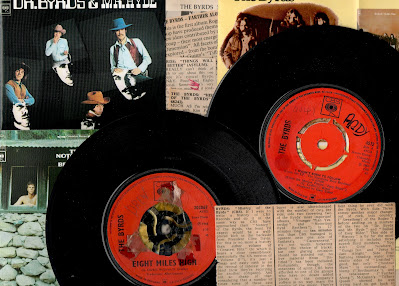 And talking first statements – the mid-1980s Edsel package consists of his solo ‘Roadmaster’ set, originally issued in 1972, and then available only in Holland, featuring sidesmen of the calibre of Sneaky Pete Kleinow and Clarence White. There’s also ‘So Rebellious A Lover’ (1987) recorded with Gene in duo with Textones vocalist Carla Olson, programming Woody Guthrie’s exquisite “Deportees” alongside Phil Ochs “Changes” and Gram Parsons’ “I’m Your Toy (Hot Burrito No.1)” plus the old Creedence Clearwater Revival gem “Almost Saturday Night”. Then there’s the two ‘Dillard & Clark’ albums which Gene cut with fellow-Missourian Doug Dillard in 1969 – ‘The Fantastic Expedition Of...’ (with contributions from Eagles’ Bernie Leadon), and ‘Through The Morning, Through The Night’ which Robert Plant perceptively raided in 2007 for his Alison Krauss collaboration ‘Raising Sand’. Original ground-breaking vinyl beautifully packaged THEN, the intervening years have only added an element of perspective from which they benefit. The first Byrd to quit the line-up ‘before the thing started to fall apart,’ the subsequent Dillard hook-up saw Gene blazing Blue-Grass trails that pioneered the Country-Rock vein later to be more commercially exploited by Leadon’s Eagles. And ironically by the remaining Byrds in a couple of albums time! 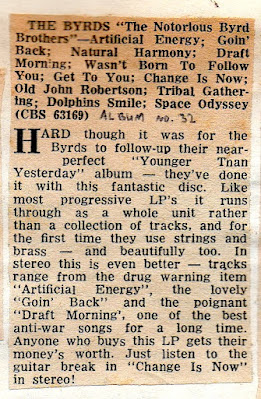 Gene attempts to unravel the complex genesis of the project. ‘Just about the time I left the Byrds, Gram Parsons came to town with a group called The Submarine Band’ he recalls. ‘I really loved them the first time I heard them. I loved his voice. I loved his songs. I loved everything. So consequently, when the spot was open in the Byrds they brought Gram into the group. Roger McGuinn had always been ‘Folksy’ anyway, so he dug the concept of doing a ‘Sweethearts Of The Rodeo’ (1968) album. At the same time they’d also approached Doug Dillard on hiring HIM for the Byrds, but Doug said something to the effect of ‘well, I’ve been playing with Bernie Leadon and Gene, and I really like what’s happening there, so I think we’ll follow through with it’.
‘I had an existing deal with A&M records, and when I presented the ‘Fantastic Expedition Of...’ idea to them they liked it very much. They didn’t know what to DO with it, but they liked it! It was ‘what do you DO with contemporary Blue-Grass in 1968?’’ He breaks down in incredulous laughter at the very absurdity of the idea. ‘And we had a lot of bumps, I mean a LOT of troubles with it. We went down to Nashville and got literally booted outta there, y’know? And even though our record was played quite a bit when it finally came out we had a problem getting it across. It was a very closed door thing, totally unlike the situation today. These days, ANYTHING to do with the Byrds in that area is like – PHEWWW!!!! So it’s completely different today.’ 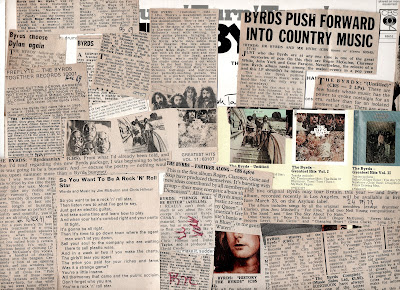 By the mid-1980s, with the albums re-emerging on vinyl, there was a whole new Paisley Underground generation of Dayglo trend-blending mix ‘n’ match bands leeching from those first statements, fine bands like Syd Griffin’s Long Ryders (who Gene recorded with), Rain Parade, and – in case you’ve forgotten, a young REM too! It must have been gratifying for Gene that – having assumed near-legendary status by the mere accumulation of years, his albums were faring so well this second time around? ‘I don’t know’ he muses, more contemplatively. ‘Right now I’m seriously looking forward to the future, and what’s going on THERE.’
Unfortunately, although that future – for Gene, was to be limited, the albums are still available. And still well worth your ear-time. He was a hugely likeable guy. 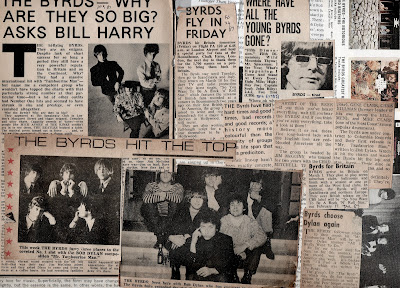 Posted by Andrew Darlington at 17:07