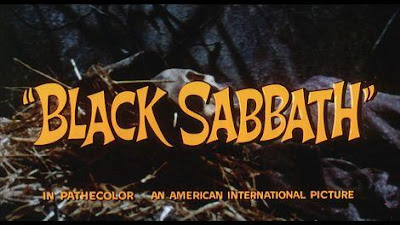 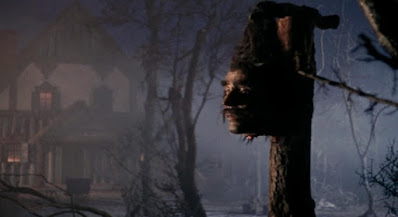 ‘Come closer, please’ cajoles a poorly-dubbed Boris Karloff, speaking directly to you, sitting in the cinema fleapit audience, ‘spectres and vampires are everywhere… they go to the movies too, I assure you!’ You flinch nervously, and glance sideways at the person sat next to you. And let’s leave Ozzie Osborne out of this, OK?
Among my favourite Italian directors there’s Tinto Brass (‘Caligula’), Michelangelo Antonioni (‘Blow Up’), Federico Fellini (‘Satyricon’)… and Mario Bava. Even before the invention of the ‘Spaghetti Western’, Bava was already defining a unique strand of Italian Horror. Following tyro film-work in sword-&-sandals epics with Steve Reeves and Gina Lollobrigida – plus the proto-‘Deep Impact’ Sci-Fi extravaganza ‘The Day The Sky Exploded’ (1958), his solo directorial debut was ‘Black Sunday’ (1960). It became an unlikely international hit, a gothic effort that also elevated Barbara Steele into cult stardom. Requiring a follow-up, Bava devised this portmanteau-film of nasty tales, three brief slices of terror and the supernatural, named as closely as possible to its predecessor – for identification purposes. There was some considerable tampering with Bava’s original footage before it was deemed suitable for the more tender sensibilities of American Drive-In audiences, but contained within this useful DVD package are both original and re-cut re-ordered versions, to compare and contrast. Although both are highly watchable, the Italian original has the undeniable edge.
‘The Telephone’ starts out as almost a one-woman chamber-piece, more psychological thriller than it is horror. In a luxurious apartment that could be Paris, with suitably low atmospheric soft-jazz, Rosy (Michèle Mercier) is alone in her ‘La Dolce Vita’-stylish little black dress, with a red telephone that keeps ringing. At first, no-one is there, just silence. Then a voice, ‘a body like yours can drive a man to madness.’ She undresses decoratively, unrolling stockings down her long shapely arched legs. While someone is watching her, the persistent troll-stalker on the other end of the line who is now threatening ‘I want to kill you, I want revenge.’ But who it? Who owns those eyes glimpsed through the venetian blinds? There are clues provided by the newspaper cutting pushed beneath her door that informs her ‘Frank Rainer Has Escaped’. 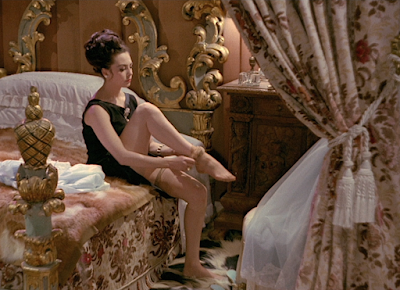 This is where versions diverge. In the U.S. version it’s a ghost-letter. She phones Mary (Lidia ‘Lydia’ Alfonsi) who responds ‘Hi Honey’. In the U.S. version they’re just good friends. In Italian they are something much more Sapphic. It seems Rosy dumped Mary for this threatening jailbird ‘Frank’, their eternal-triangle adding nuanced depth to the plot contours. They’ve broken up, and sure, there are the bitchy put-downs of an ex-lover, but Mary doesn’t bear a grudge, she’ll come around in her vivid green dress and black gloves and be supportive. Yet it soon becomes apparent that it is Mary who is contriving the crisis in an attempt to effect a reconciliation, she is the mystery caller on the phone, her voice muffled by an amber cloth. But her scheme goes awry when the real Frank arrives and strangles her with a discarded stocking. Then Rosy draws the knife she’d stashed earlier, and stabs him. Rosy is alone again. Both her lovers are dead. It’s the deleted bisexual element that gives this drama its three-way power. Without it, it’s just a conventional, if more effective Slasher.
The second segment – ‘The Wurdalak’, cleaves to more traditional 1960s Horror expectations, with a lone rider discovering a headless corpse beside a river on a wild Carpathian mountainside. When the rider, Count Vladimire d’Urfe (Mark Damon), arrives at the inevitably mist-shrouded Inn, he finds the knife responsible for the beheading fits a vacant space on the weaponry wall-display. Again, as usual in such situations, attractive wench Sdenka (Mondo soft-core starlet Susy Andersen) warns him to leave. But the dog howls as a hooded figure crosses the wooden bridge moments after the midnight bell tolls. It’s Old Father Gorca (a looming tomblike Boris Karloff). He acts with mysterious menace. Yes, he killed the Turkish bandit, and brandishes the severed head as proof, but he was wounded in the heart during the struggle. Fatally wounded? Is he dead too? Things get progressively creepier, in a Hammer Horror kind of way, albeit with a novel twist. ‘The Wurdalak are bloodthirsty corpses’ explains Sdenka, but ‘the more they’ve loved someone, the more they long to kill them, to seek their blood.’
So, they’re zombie-vampires, but with the added psychological bite that their deceased appetites are directed by love. As illustrated when the child Ivan is abducted away into the cold windswept night, to rise from its grave and appear outside the door pleading ‘Mama, Mama, let me in.’ Although mother Maria (Rika Dialina) realises the truth, her maternal love overwhelms reason, and she opens the door. As the undead corpses pile up Vlad urges the lovely Sdenka to escape with him, declaring his love and warning her ‘these are days of terror’. Driven to escape, the lovers seek overnight refuge in a suitably Gothic ruined convent as darkly atmospheric as a doomy oil-painting, where the dead Gorca appears to tell his daughter ‘no-one can love you more than we do.’ Her family is dead. Love has torn them apart. A love colder than death. When Vlad wakes, she’s gone. Knowing her fate, he follows her to the Inn anyway. Willingly damned by his love for her. They kiss. She bites his neck. From a story by Aleksei Tolstoy (second cousin of the more famous Leo), again it’s the bonus emotional pull that adds gravity to the plot.
The third segment – ‘The Drop Of Water’, takes Mario Bava’s dark trilogy off on yet another tangent, this time resembling Victorian London. Making it three neat nasty tales, with no obvious theme or underlying unity, beyond Karloff’s linking narrative and a kind of ‘Tales Of The Unexpected’ tension. Unless it’s the phone? This time there’s a huge red phonogram playing jaunty Neapolitan music. And thunder. Then the telephone rings, maybe arcing the cycle full-circle back to the first female-centric story? Maybe not. Reluctantly, as the record winds down, Nurse Helen Chester (Jaqueline Pierreux) goes out into night, to a big house crawling with feral cats. The Countess who lived there is dead. She died of a heart attack while in a séance trance… or maybe it was the otherworldly presence she was contacting that killed her? 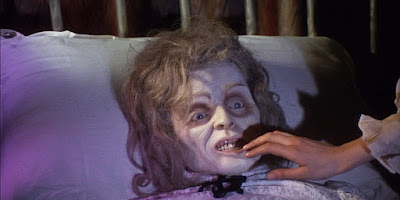 As she dresses the corpse Helen steals a ring from its dead finger, shoving it down the front of her bra as a malevolent fly buzzes. There’s atmospheric jazzy double-bass, and dolls, and the unrealistic puppet-face corpse opens its eyes after she’s closed them. All conspiring towards a general spookiness. Back in her eerily-lit room she tries the ring on. The same fly is there a-buzzing, the door creaks, and water drips tick-tick-tick sounds no matter how many times she screws the taps down tight. Then she glimpses the dead Countess in her rocking chair. The corpse gets up and seizes her around the neck with dead hands… The following morning she’s found dead of self-suffocation. She’s apparently strangled herself. And the Landlady has stolen the ring, wrenching it from her dead finger. So the cycle begins again.
Mario Bava, who died in 1980 aged sixty-five, went on to direct ‘The Whip And The Body’ (1963), adding S&M overtones to its Gothic template, and a voice-dubbed Christopher Lee to its otherwise-Italian cast. And although distribution problems limited his access to international markets, his ‘Planet Of The Vampires’ (‘Terrore Nello Spazio’, 1965) is often cited as an influence on Ridley Scott’s first ‘Alien’ (1979), and his explicitly gruesome ‘Twitch Of The Death Nerve’ (‘Ecologia Del Delitto’, 1971) is seen as an early ‘Giallo’ precursor of the disreputable ‘Slasher’ sub-genre. While Ozzy Osborne was taking notes towards forming his own Heavy Metal band. But meanwhile Bava closes the Italian version of ‘Black Sabbath’ with a deliberate unmasking of the artifice of Horror. Boris Karloff rides furiously off into the night, until the camera draws slowly back to reveal that the horse he’s riding is a prop, with Extra dashing past with effects-foliage. The camera pulls further back, to show the studio and the camera itself. 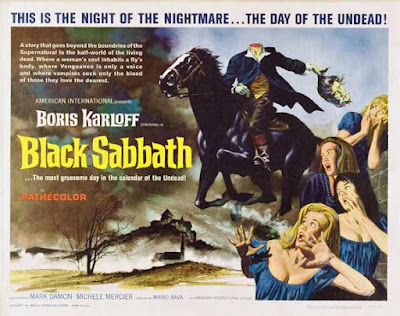 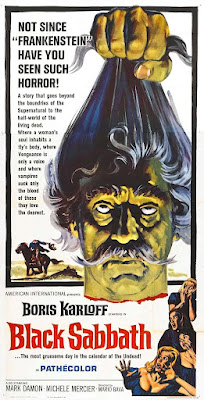 Posted by Andrew Darlington at 11:27