MARTIN CARTHY:
JOUSTING WITH
‘PRINCE HEATHEN’
Live Review Of:
MARTIN CARTHY
at the Labour Club, Wakefield
Martin Carthy has hypersensitive fingers. He also has a CND earring that catches the light and throws it back in soundless chromatic explosions as he grimaces and rubber-faces degrees of intense expression. His tongue extends, then laps in hungry questing concentration, critically tasting each note he’s reeling and jigging out of his battered acoustic box, wincing in real physical pain at imagined imperfections that only he (and Segovia!) could detect. Back in the roaring ‘Prince Heathen’ days when he jousted the Fairport Convention’s Dave Swarbrick up and down each Club and Festival on the Old Albion circuit, and when he commandeered the Steeleye Span Trojan Horse as a vehicle for his own particularly pure brand of Folk-Rock, he held the long-distance guitar-tuning record. Now he’s not so much abandoned that claim as developed it into an ongoing situation with continual mid-course corrections to the chosen instrument of his profession and craft.
In appearance he’s not much different to that impish Romany visage that grins genially out of the album-sleeve mugshots, his hair hacked short, but uncombed, his clothes uncontrived but ‘right’, lived-in, comfortable, same as the resonance of his corroded draught-bitter voice and his easy line in between-numbers humour. His set plunders each stage of his long career. “Skewbald”, the gambling song from his Steeleye repertoire, thefted onto so many ‘Best Of…’s and sampler compilations it must be in line for some sort of record itself. Then there’s the bawdy comic “John Blunt (Child 275)” from his early solo vinyl ‘Shearwater’ (1972), and “King Henry” from his mid-seventies ‘Sweet Wivelsfield’ (1974) album. His songs – researched with scrupulous care from largely traditional sources, demand your attention. Although strategically spaced with humour and double-entendre they more often depend on subtle nuance and an attuned ear for effect – but, particularly for the very haunting “Wind That Shakes The Barley” a little rigorous attention isn’t much to ask. 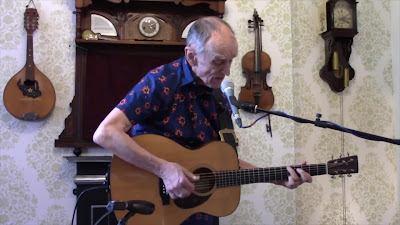 At the intermission, slurping the half-pint of Theaksons I’ve just plied him with, he cheerfully regales how the ‘New Socialist’ magazine has consigned all of what it arbitrarily terms ‘pre-electronic’ music to the great dumper of non-relevance. Yet who with ears could fail to find lurking contemporary analogies in the magical “Village Lady” about racial cross-marriage, a song he confesses to be ‘my favourite’. Or in the unaccompanied booze-‘n’-riot epic that leaves ‘a carpet on the floor, of skin and hair’ – a lyric worthy of Punk-band Exploited at their most horrendous! And then again, how in techno-speak could you perpetrate such a lushly erotic contrivance as ‘I planted seeds in the grove, where grew no green,’ and that line in a song he claims to be based in ‘panic’. He glances down at my tape-machine and grins. ‘Are you intending to record this? I don’t think it’s going to work against all the background sound.’ Yes, I was intending to record our conversation. And he’s right, our voices are drowned in other other people’s conversations and clinking glasses.
But Carthy – whose much-imitated vocal delivery, phrasing and song-selection, already imprints and bedrocks an entire generation of performers, will still be playing to sell-out audiences when those would-be trendies are out hunting yet more bandwagons to jump, chasing the next-but-several trend with increasing desperation and diminishing credibility. With just his two guitars, regularly switched and even more regularly tuned, and an uncluttered vocal architecture both as solid, and as full of character tales as Wakefield prison, he winds through the narrative “Lowlands Of Holland” about the press-gangs. Then into the sparse instrumental “Lord Byron”. He shuffles the running order at whim, and forgets titles until he’s well into third verses.
He sings “Reynard The Fox”, a fox-hunting song seen ‘from the point of view of the fox,’ then a gipsy song called “Sheep Crook And Black Dog”, and follows it by delivering a hard political “Geordie”. Those with a bent for academic analysis could probably come up with some very profound interpretations of “The Siege Of Delhi”, a ‘beautiful song to commemorate an event of unbelievable ghastliness,’ they could also probably do a neat line in Carthy’s oeuvre sending down roots through the concrete and the asphalt, the glass and the steel, the apathy and the alienation, to plug into the ancient eternal machineries of human motivation, the continuities of sex, conflict, alcohol, jealousy, violence, death and the supernatural. But the songs say it all far more concisely. And the album he’s currently recording for the Topic label – ‘Out Of The Cut’ (1982), with fellow ex-Steeleye Spanner accordionist John Kirkpatrick, trumpeter Howard Evans and the mighty Richard Thompson, will bring it together far more enjoyably.
With 1981 flying a whole fistful of sold-out Festivals, and Folkies such as Steve Ashley and Leon Rosselson leading the vocal side of the great CND revival, Martin Carthy could conceivably find himself once again coasting in on a minor, but most interesting wave. Not that that’s likely to worry him over-much… 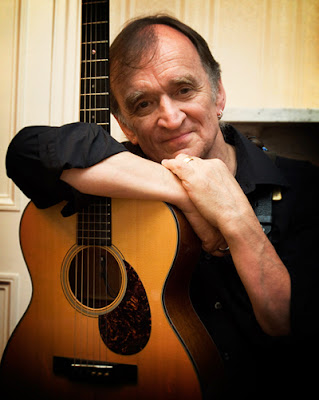 Posted by Andrew Darlington at 11:54