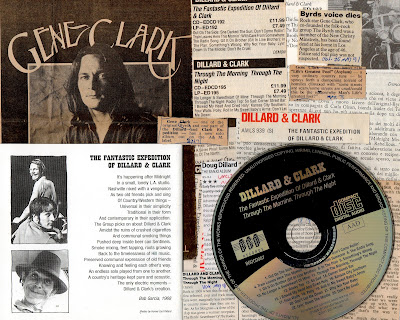 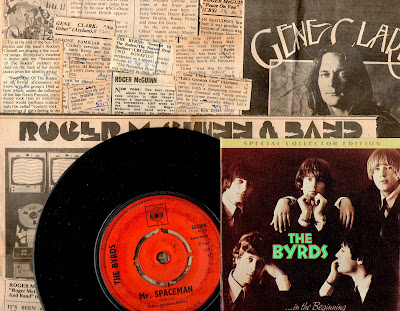 The Byrds, ah yes – Roger McGuinn. Except no, not quite. ‘In 1965 Gene Clark was the Byrds’ writes John Einarson in this excellent rigorously detailed biography. The strongest original songs on the first three Byrds albums – the finest debut trilogy in Rock, were by Harold Eugene Clark. McGuinn seems to agree. Talking at the Leeds ‘City Varieties’ he admits how ‘blessed’ the group was to have so fine a writer aboard. But Gene’s were slow-burn songs, initially relegated to ‘B’-sides in favour of Dylan or Pete Seeger covers, because they lacked radio immediacy, revealing their beauty only through repeated plays the airwaves couldn’t afford. But “Feel A Whole Lot Better” – later peerlessly covered by the Flamin’ Groovies, and by Tom Petty, “I Knew I’d Want You”, “Set You Free This Time” and the rest, are class compositions. Coming from a thirteen-kid Catholic family with Irish and Cree Native American blood, Gene was rugged and athletic, but also intense and wired. A complex, insecure, troubled man, prone to swings in temperament that Einarson’s investigations now interpret as evidence of a bipolar condition. His sister Bonnie recalls how his music began, ‘after Gene saw Elvis, all he wanted to be was a Rock star.’
During his fresher year he joined high-school band Joe Meyer & the Sharks, moving from there into the ‘Michael Row The Boat Ashore’ coffeehouse folk-thing with a doctored ID. By 12 August 1963 the eighteen-year-old Gene was recruited into the wholesome hit-making New Christy Minstrels alongside Barry McGuire. He cut records with them (the first called “Saturday Night”), and appeared on ‘The Andy Williams Show’. They did a special White House performance for new President Lyndon Johnson in January, but to Gene, the group’s cheerful family-friendly choreography was frustratingly ‘square’. At around the same time he heard the Beatles for the first time, on a jukebox in Norfolk, Virginia, and pumped nickels all night to hear them again. He was not only listening, but analysing their dynamics, how they did it, and why what they did worked so well. It was the catalyst he needed. 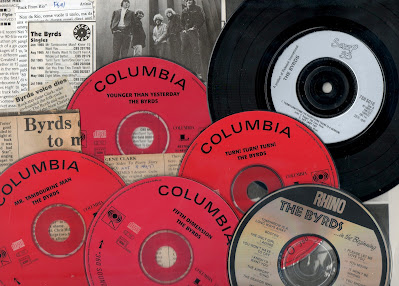 He quit the Christy’s – before he was fired and headed for LA, and fame with the Byrds. Two American no.1 singles with “Mr Tambourine Man” c/w Gene’s “I Knew I’d Want You” and “Turn! Turn! Turn!” c/w Gene’s “She Don’t Care About Time”, plus hit albums ‘Mr Tambourine Man’ (June 1965, CBS BPG62571), ‘Turn! Turn! Turn!’ (December 1965, CBS BPG62652) and ‘Fifth Dimension’ (July 1966, CBS BPG62783). Einarson clarifies the group’s fractious internal politics in ways that my reading of Johnny Rogan’s ‘Timeless Flight’ (Gullane, 1990) never quite did. Jim McGuinn and Gene Clark, with David Crosby were three strong-minded creative wills tied into uneasy compromise and permanent simmering contention. With McGuinn’s icy intellect, and David Crosby as the impish meddler, all complicated by their collective envy of Gene’s writer-royalty cheques. Until, unsettled by the sudden status afforded them – as the American Beatles, Gene was the first to quit, shortly after initiating their finest-ever record, “Eight Miles High”. He was the character in David Crosby’s “Psychodrama City” tale where the Byrds got on a plane, and ‘one of my friends got off again,’ Crosby adding ‘to this day I don’t know why.’ The reasons included tensions and group rivalries amplified by their stratospheric celebrity.
For Gene, ill at ease with stardom, there were to be a series of solo albums, groups, lost opportunities, and new beginnings. He went on to pioneer ventures into roots and country that would be more lucratively exploited by others. But he would forever be an ex-Byrd, living well on Byrds-royalties. His solo work was varied – from the textured density of ‘No Other’ (1974, Asylum 7E-1016), to the stripped-down ‘Two Sides To Every Story’ (February 1977, US RSO RS-1-3011), but nothing he did would produce a signature ‘Gene Clark sound’ strong enough to replace what had gone before. Never quite ‘in synch with his time,’ his albums tended to be overlooked, only to be subsequently recognised as influential and reclaimed by music historians later. 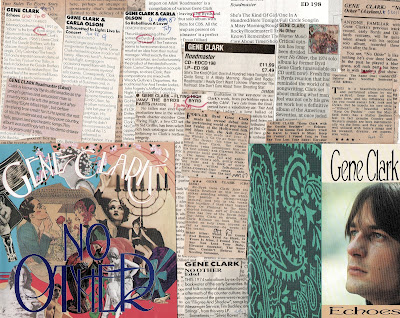 As the Byrds ‘Younger Than Yesterday’ (February 1967, CBS BPG62988) LP emerged, its high-profile launch eclipsed Gene’s first solo work ‘Gene Clark With The Gosdin Brothers’ (February 1967, US Columbia CS9418) which includes his enchanting “Echoes”, and features sidesmen Clarence White and Doug Dillard. ‘The Fantastic Expeditions Of Dillard And Clark’ (October 1968, A&M SP4158) with Doug Dillard and Bernie Leadon met a similar fate, even though it premiered “Train Leaves Here This Morning” which co-writer Leadon would take forward onto the Eagles mega-selling debut LP (Gene’s jokey ‘B’-side version of Elvis Presley’s “Don’t Be Cruel” would be added to the 2001 Edsel-label CD reissue). The second Dillard And Clark album ‘Through The Morning, Through The Night’ (August 1969, A&M SP4203), recorded with an expanded line-up of Donna Washburn, Byron Berline, Sneaky Pete Kleinow, Chris Hillman and Michael Clarke contains no less than two hauntingly beautiful Gene Clark originals which would achieve acclaim as part of Robert Plant And Alison Krauss’ ‘Raising Sand’ album in 2008 (it also includes covers of Don Everly’s “So Sad” and John Lennon’s “Don’t Let Me Down”), yet at the time Gene’s reluctance to play the industry game, his unwillingness to tour, to do interviews and promo meant that such albums consistently failed to reach the audiences they deserved, and generated little more than critical respect. His initially stabilising marriage to Carlie, and the country-comforts of Mendocino ran aground. There was a damaging relationship with Terri Messina, and roaring lost months of booze and narcotic excess with Doug Dillard and Jerry Jeff Walker. While touring, their bar bills far exceeded their weekly takings.
There was a shaky Byrds reformation in which old grudges, animosities, and antagonisms resurfaced, David Crosby – as the most commercially successful survivor of the ‘Mr Tambourine Man’ line-up, revelled in assuming production duties, mixing McGuinn’s jingle-jangle low and excluding all but two new Gene Clark songs. There were also contentious McGuinn, Clark And Hillman reunion dates, but the rigours of touring itself forced Gene back into chemical dependence. Contracts lapsed. There was litigation over the rights to the Byrds name itself, even as Gene was reduced to touring as a kind of Byrds tribute band. There was stomach surgery, then, when – for the final time, all five original Byrds were together for their induction into ‘The Rock ‘n’ Roll Hall Of Fame’ – 16 January 1991, there was a partial reconciliation, of sorts. Shortly after, during duo recording sessions with Carla Olson, Gene was finally found dead, aged forty-six. The coroner’s verdict was heart attack. But to Einarson, Gene Clark ‘had a fear of success and whenever it came close his self-destruct mechanism activated.’ ‘He couldn’t handle fame’ agrees McGuinn. But when I saw Gene at the Wakefield ‘Pussycat Club’ shortly before he died – playing support to Lindisfarne, he did the full version of “Mr Tambourine Man”. And it was mesmerising. This fine book is all you need to know about the ‘Life and Legacy of Mr Tambourine Man’.
www.backbeatbooks.com
Published in:
‘ROCK ‘N’ REEL Vol.2 No.11 (Sept/Oct)’
(UK – August 2008 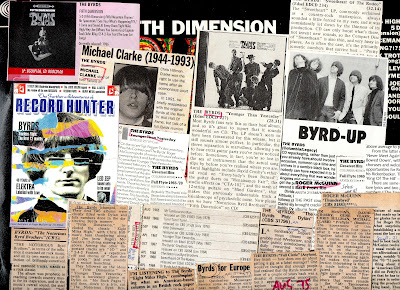