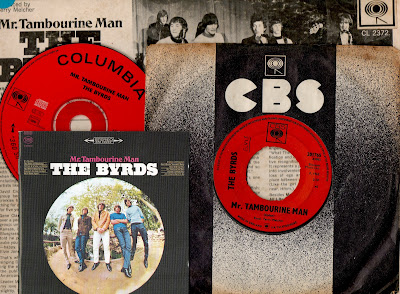 ‘A FLIGHT THROUGH
McGUINN’S BACK PAGES…’
LAST NIGHT A RECORD SAVED
MY LIFE: ‘MR TAMBOURINE MAN’
All ‘Golden Ages’ are brief testosterone-powered interludes coinciding with awkward adolescent sproutings and accelerating biorhythms. Yet that opening startle of rippling jingle-jangle Rickenbacker still shocks. We knew it was Dylan, of course. That only increased its relevance. Dylan spoke in syllables dreadful strange. ‘Ancient empty streets too dead for dreaming,’ so he’d been to Hull? yet transfigured into allusive poetry on the edge of suggesting so much more. And by up-gearing the lyricism of Folk, while allying it to a Rock ‘n’ Roll backbeat it was side-shifting Pop’s vocabulary into new fifth-dimensions. Granting it the gift of literate articulacy. Into Rock. A metamorphosis begun with David Crosby emerging from ‘A Hard Days Night’ high on its energies, his life, his music transfigured too. 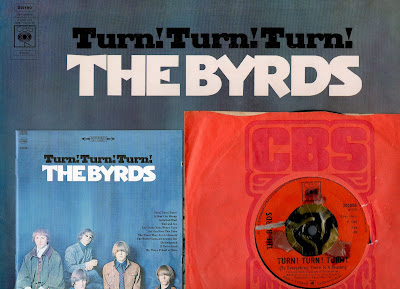 The Byrd’s aloof mystique, glimpsed from a single promo shot in ‘Record Mirror’, was immaculately impossibly hip. Razor-perfect Indie fringes emerging from ‘With The Beatles’-darkness. Inaccessibly West Coast. Naturally, on the other side of lake Atlantic, the Yardbirds were just as wonderfully strange, by that same distancing process. But that was there, this was here. A single orange-label 7” record (CBS 201765) in a matching orange CBS-logo’d sleeve. Hearing it once in the listening booth was enough, top floor of ‘Hammonds’ department store, that first hot week of June 1965. Pared down from Dylan’s densely-worded screed into radio-edit size – to chorus, single verse, chorus, until it crackles with futuristic electricity, and a stratospheric glide of alien harmonies. With only enough coins to either make the purchase, or bus-ride home, I slouch the four miles clutching it every pace, conscious of the pulse of vibes conducting up from black vinyl through my fingertips. Over the coming weeks it climbed the chart, to no.1 for a fortnight 22/29 July, before ceding the top slot to “Help”.
I never got to see the Byrds while they were together. But later I’d get to see solo Gene Clark magically spin out the full Dylan verse-version, in a low-rent club in West Yorkshire. Then I saw David Crosby with Crosby, Stills & Nash. And I watch solo Roger McGuinn doing “Mr Tambourine Man”, sitting on a chair centre-stage at the Leeds ‘City Varieties’. Each time special. There were other life-changing 45’s. The Byrds themselves would do it again in a few years time with “Eight Miles High”, but “Mr Tambourine Man” would always encompass vistas of limitless possibilities unequalled before… or since. A testosterone-powered thing, a ‘golden age’ maybe, but one that happened at exactly the correct point in my precarious evolution. 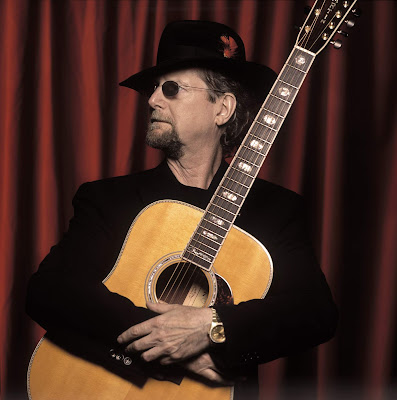 Concert review of
ROGER McGUINN
at ‘The City Varieties’, Leeds
(Monday 24 June 2002)
Leeds. The decorous ‘City Varieties’ Music Hall, home of TV’s retro-cult ‘Good Old Days’. Everything here is dark red, from the brocaded walls to the velvet upholstery. And – it must be said, it’s a venue with an intimacy that suits Roger McGuinn. Squinch your eyes, it’s almost a throwback to the Greenwich Village coffeehouse folkie scene where it all began. When he was still called ‘Jim’ McGuinn, and when he started mixing Beatles’-covers in with his traditional arrangements, to unsympathetic response from hard-core purists. Tonight has that kind of personal one-to-one feel with the audience. Except that now he has history.
He opens with “My Back Pages” played on a white twelve-string. A song already wistfully nostalgic for changin’ times of political (un)certainties and abstract threats too noble to neglect. Dylan wrote it for his 1964 ‘Another Side Of…’ album, the Byrds version following a few years later, on their ‘Younger Than Yesterday’ (February 1967) album – which obliquely derives its title from the lyric. Roger replicates the pealing guitar-solo that catches its yearning melancholy so exquisitely. He wears a black hat, disciplined beard, glasses, and a black no-logo ‘T’-shirt. He sits on a high stool, stylishly toe-tapping, little more... 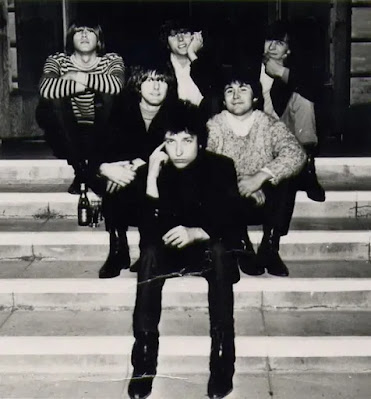 The evening began with the jazz-inflected vocal-style of Rebecca Hollweg, with gossip about her involvement soundtracking the short 16mm Sara Cox movie ‘The Bitterest Pill’ (1999). She’s good, but then McGuinn gets into relating how he got involved in a ‘low-budget motorcycle movie’, how Dylan wrote some lyrics on a napkin for Peter Fonda and told him ‘give these to McGuinn, he’ll know what to do with them.’ Then he plays the results – “The Ballad Of Easy Rider”, conjuring elegiac images of how it played out over the closing credits of that seminal counter-culture movie. From the same source Carole King’s “Wasn’t Born To Follow” originally came with the Byrds phased guitar cascading in light-bursts through ‘leaves of prisms’. It still works, even when pared down to McGuinn’s simple acoustic.
Of course, road-songs are a continuity in American culture, which he illustrates with a ‘contemporary folk song’ called “Driving High, Driving Low” made up of CB-radio dialogue. ‘I’ve always been a science and technology buff’ he admits, which provides a neat light-speed jump to introducing “Mr Spaceman”, that quirky appeal to strangers in saucer-shaped lights to take him star-tripping to CTA102 and beyond. He continues with ‘the first country-rock song I did’ – “You Ain’t Going Nowhere”, lifted from Dylan’s ‘Basement Tapes’ under Gram Parson’s influence as a trailer-single for the divisive ‘Sweethearts Of The Rodeo’ (August 1968) album which upset as many fans as it created new ones. Now, well beyond all the heated analysis, it sequences smoothly into the set’s contours. 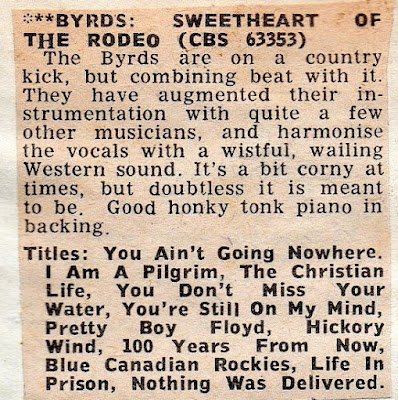 He’s sitting alone on stage, until he reaches to sip from a Volvic bottle, then he’s accompanied by three dark ghost-shadows imitating his actions behind him. All manner of metaphors could be strung out from that, about former colleagues, creative feuds, rifts and reconciliations, thefts and collaborations, but best not to. His voice is still as curiously high, driven by his instantly distinctive guitar-work. Rivers flow. That’s enough. With an effortlessly über-cool aloof persona – wasn’t that always the Byrds ‘unique selling point’? and still slightly detached, he nevertheless sparks ripples of warm connection that others… say, Paul Simon, can never achieve. An already self-confessed tech-geek, he now explains his ‘Treasures from the Folk Den’ project, through which – since around 1994, he’s been using http://mcguinn.com online resources to upload and archive the traditional songs he first encountered during his coffeehouse days, complete with lyrics, guitar tablature, and tales about the musical heroes he first found singing them. 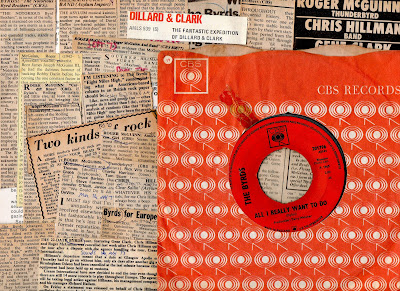 He illustrates with “Pretty Boy Floyd”, “Finnegan’s Wake” – as done with Tommy Makem on the first spin-off CD fuelled on something he describes as ‘the creature-whisky’, and “Fare Thee Well” from Pete Seeger & Josh White Jrn. And it’s evidence of the kind of new-old synthesis that created the Byrds in the first place, a growing-apart together, cultural opposites – yet alike. But should these esoteric new ventures prove distracting for Byrdmaniax he throws in “Chestnut Mare”, the group’s surprising final UK chart record (no.19 in February 1971). Then follows it with the complex guitar phrases of “King Of The Hill” from his 1990 solo album ‘Back From Rio’. He explains how he wrote it with Tom Petty, who’s own career – and especially “American Girl”, started out very much in McGuinn’s stylistic wake. Then his Cajun-flavoured “Lover Of The Bayou” from his 1975 ‘Roger McGuinn & His Band’ album, before returning to the Byrds via Pete Seeger’s “Bells Of Rhymney”, with the explanatory anecdote about how, after performing the song for nigh on twenty years, a Welsh fan finally corrected his pronunciation, so he now takes care to attempt a more authentic ‘Bells Of Rumney’, with fine acoustic interplay.
Drawing things towards a Byrds-centred close he briefly tributes how the group was ‘blessed to have Gene Clark’ focussing the line-up of the first three albums, and does Gene’s “Feel A Whole Lot Better” between verses of “Mr Tambourine Man” and “Turn! Turn! Turn!”, playing both rhythm and lead guitar. After a tactful pause he returns for an encore that encompasses an amazing “Eight Miles High” replicating the record’s full mind-skewing guitar-fragmentations live and solo while throwing in ‘Ravi Shankar, just for fun’, a ‘scream-alonga-delica’ with “So You Wanna Be A Rock ‘n’ Roll Star”, then returning to ‘just get an acoustic guitar’ for the closing “5D (Fifth Dimension)”. Having defined and mapped the sound of the last half-century to the extent that generations of pale white jingle-jangle Indie guitar-bands breathe him as second nature, almost without realising it, here within the dark red brocade walls and velvet upholstery of the ‘City Varieties’, Roger McGuinn shows how tradition and technology can respect those roots, and yet still take them restlessly further, into yet newer incarnations… 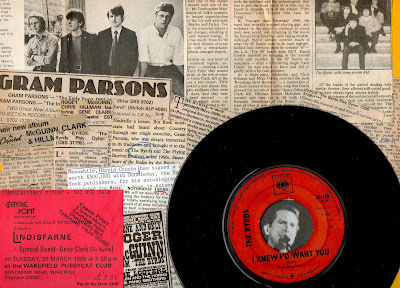 Posted by Andrew Darlington at 20:25