A gig review/ interview
at the ‘Warehouse Club’, Leeds

The Long Ryders play a four-dimensional music for both ears. Sid Griffin sound-checks on stage with tall dark Stephen McCarthy while their guitars are balanced out at the control desk. The mike-stand judders, sways and wavers precariously between them, nodding in sympathetic vibrations as they move – Griffin notices the action and tests it, shaking first one leg, noting the answering degree of mike-quivers closely, then both legs. ‘Hey’ he announces, ‘I can’t do my Elvis, but I CAN do a Gene Vincent with the bad leg!’ Bass-player Tom Stevens, in Brian Jones floppy fringe and red-patch lumberjack jacket, grins contagiously.

‘Both of you together’ instructs the guy at the sound-mixer. ‘E-chord’ suggests Sid. And they break into an impromptu rag-out around the instrumental break of Stephen’s “I Had A Dream”, guitar-lines cutting like a flame-thrower through butter, clean and pure as full-strength adrenalin. Then, joined by drummer Greg Sowders, the band work through into “Time Is Tight” which sounds oddly lobotomised without the Booker T organ, then John Fogerty’s rip-roaring “Almost Saturday Night”, guitars running like brittle quicksilver across the stage, sharp, exciting, exhilarating – add your own adjectives, the UK music-press have already had a field-day with theirs, clichés flying faster’n the angry buzz of Rickenbacker’s on heat. Paisley Underground, Byrds revivalists, psychedelicatessens, the revenge of the American guitar. And at the centre of it all, four wastrels from LA, the Long Ryders, an album called ‘Native Sons’ (Diablo, 1984), and a USA-only EP called “10:5:60” (PVC, 1983) that’s made the charts here on import-strength alone! The prestigious Bob Harris BBC2 TV-show ‘Old Grey Whistle Test’ gave the video for their near-charting single “I Had A Dream” screen-time an unprecedented two weeks running – and, in justice, it IS just about the best guitar-trafficking Rock anthem since the Flamin’ Groovies ‘Shook Some Action’.

While behind them, oblivious to the sound-around audials, a Punky girl-roadie positions stage furniture, an Elvis poster – a late-seventies Hawaiian oddity rather than a more appropriate early rocker, and two amp-draping ads for ‘RED-MAN CHEWING TOBACCO – IN FOIL POUCHES’. Some defiant Amerikana in a foreign land.

Perhaps the Long Ryders have a sponsorship deal with ‘Red-Man’ tobacco? 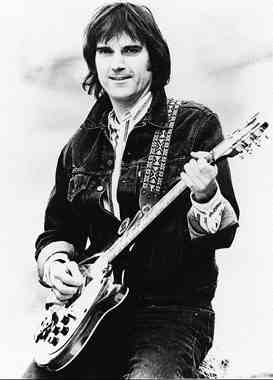 Later, Griffin’s sat on stage, carefully gaffa-taping the back of his guitar for some musicianly esoteric reason. He’s tall – rangy I think’s the word, with l-o-n-g white denim pants, pointed-toe boots and a ‘Sin City’ jacket-top, shaggy shoulder-length hair, sideburns down to… here, and jet-lagged rings under his eyes.

So, what kind of reaction have you been getting on this tour, Sid? ‘In the United Kingdom it’s been amazing, in fact really – in Europe, it’s been amazing’ he comments laconically. ‘We’ve sold out Clubs, and I MEAN we’ve sold them out. In the States they have a Gentleman that walks around, called the Fire Marshal. And he inspects rooms to make sure there’s enough fire exits and that only a certain amount of people can go in so if a fire breaks out, or a bomb goes off, they aren’t all killed because there aren’t enough exits. We’ve played places in the UK that have been so crowded that if the Building Inspector or the Fire Marshal had been there there’d be no way the show would go on. He’d have stopped it right there. And – that’s good, in a way. I’m very proud we can pack it, and I MEAN pack it. I mean sardine-pack some joints! I’m very pleased with that. This is what we wanted. In Nottingham in particular, it got to frightening proportions. I mean, it was so crowded. I’d NEVER been claustrophobic in my life till that night. It was almost frightening. It was just like – I think, the joint holded five-hundred people and we had seven-fifty or eight-hundred in there. But that’s a lot better than ten people showing up!’

We do have Fire Marshals over here, I point out. He laughs, ‘hey, if they’d have seen it last night, and in Nottingham three nights ago – or was it two nights ago? They would not have allowed the show to continue.’ Further – not only do we have Fire Inspectors, but Leeds Council attempted to impose a legal decibel-limit on the volume Club-bands could play. ‘I didn’t know that’ he muses. ‘I don’t know how loud we are at all. I’ve never understood how loud we are at all. Usually on stage it’s not that loud. Tom Winston does our sound, he’s a Welshman, so the sound’s usually under control. I don’t really know about that, I certainly have no interest in being like Deep Purple or Led Zeppelin. A lot of kids in the States – young boys fourteen and fifteen, seem to think the louder the band is, the more macho or more ballsy they are. It means they’re LOUD, it doesn’t mean they’re BETTER. When you get that loud it’s like a Concorde plane taking off. There’s no real subtlety to it. It’s just one big fist coming at you.’

By now, the support band – New Age, are tuning in with the familiar ponderous “Sweet Jane” riff. They’re a depressingly regulation line-up of disparate black leather, porcupine hair and ear-studs. The punky girl-Roadie says they come from – she thinks, Middlesbrough. She likes them a lot, gives me a New Age button-badge, which I promptly lose. Their orthodox post-punk image of what constitutes a ‘new age’ contrasts pretty neatly with the Long Ryders. The Ryders are musicians rooted in longer Rock traditions. So I ask Griffin about HIS policy on cover-versions.

He grins. ‘We JAM – as most crummy American bands do, on a buncha songs during sound-checks, like you heard “Almost Saturday Night”. If we’re really bored and sick of our own material we might throw one into the set or use it as an encore, but that’s pretty rare y’know. I mean, we’ve got some damn good songs in the set, songs that I’m very very proud of that aren’t even on a record yet. And I want you all to hear them. Because I need to know if they’re any good. So if we play them and no-one at Nottingham, Durham, Leeds or Manchester applauds, we know they’re not any good, don’t we? So we don’t put them on the next record. We do three cover versions as part of the set, but apart from that, playing cover versions is NOT where it’s at for me…’

Later, the Long Ryders turn in a dazzling set that fully justifies Press expectations. They synthesise all the diverse energies of Rock’s various phases, its actions and reactions, progressions and regressions, licks and predilections, laundering them all clean and new. Tommy’s fringe even gets to look more Dee Dee Ramone than Brian Jones. As the gig develops, they do a clutch of covers – Flamin’ Groovies “I Can’t Hide”, Bob Dylan’s “Masters Of War” and “Highway 61 Revisited”, offset by a whole range of new unrecorded songs – “State Of My Union”, “South Side Of The Story”, buttressed by high-octane stand-outs from ‘Native Sons’ that already sound like classics to these ears, Stephen and Tom’s “Wreck Of The 809”, Stephen’s “Still Get By”, and “I Had A Dream”. Their onstage kineticism ties in all the loose ends and resolves all the contradictions. They draw on the past, but deliver it up revitalised into what can only be 1985.

Four-dimensional music for both ears. 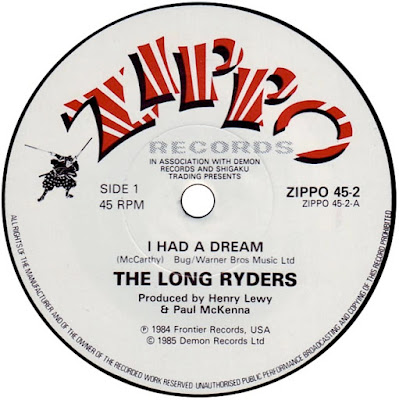 Posted by Andrew Darlington at 16:37