Poem: THE ALIEN IN THE ATTIC 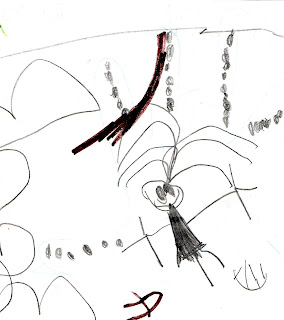 THE ALIEN IN THE ATTIC
(by Kieran and Andrew Darlington,
with art by Tamsin Darlington)


Herne is the boy who lives next door,
he told me of the things he saw
as he climbed the stairs to the upper floor,
he found the alien who lived in his loft
which collects all the things you think you’ve lost,
it has three heads, warm and blobby and soft,
each head has ten eyes that glow at night
they wink like bugs to give x-ray sight
it chews holes in the wall like a big termite
to watch the pigeons who nest in the eaves
to see the squirrels who dart through the leaves
and the mice who thieve its alien cheese,
Herne says each head has ten hands
to work with springs, screws and elastic bands
which it gathered while travelling distant lands,
but now it was hiding in strange disguise,
as a book or a box or a pile of dead flies,
it eats fish-fingers and custard and booger-pies,
has scales and feathers, and a coiled lizard tongue
that uncoils forever its unbelievably long
to suck up spaghetti and sometimes meringue,
each hand has ten fingers that wriggle like eels
to collect smelly socks and bicycle wheels,
and can fix broken clocks whenever it feels,
Herne is the boy who lives next door,
he told me of all the things that he saw
even though its not living there any more
it was hiding in his attic-loft
with three heads, warm and slimy and soft,
but it’s now flown back to its home aloft,
to a moon the wrong side of the alien skies,
and I’m sure it comes as no surprise
that sometimes… I think that Herne tells lies

Posted by Andrew Darlington at 11:20