Posted by Andrew Darlington at 18:47 2 comments: 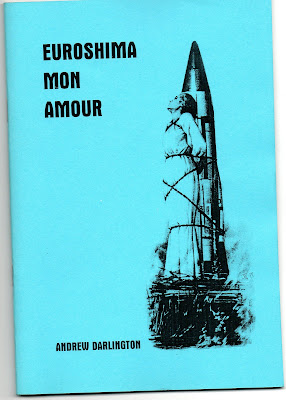 “EUROSHIMΑ MON AMOUR”
by
ANDREW DARLINGTON
‘POEMS FROM THE INNER MIND TO THE OUTER LIMITS’
“... poetry from a twisted mind ...” (‘NEW MUSICAL EXPRESS’)
“ ... an incisive direct style that owes more to a Stanley Knife than to a pen ...” (‘SEPIA’)
“... step inside and sample the delights of a new dimension in entertainment ...” (‘KNAVE’)
“... one of the brightest underground UK Bardic stars ...” (‘GLOBAL TAPESTRY’)
32 poems brought together for the first time - including “Beautiful Pagan”, “Beyond The Contraverse Intersection”, “Mars Is A District Of Sheffield”, “M. Charles Baudelaire’s Quantum Singularity”, “The Wave-Particle Paradox”, and “Hannibal Deathridge: His Journeys In Strange Subterranean Lands, To The Pendant World & Beyond”. ‘EUROSHIMA MON AMOUR’ is a truly extraordinary work by a visionary poet with the ability to see two worlds at once - today’s turbulent existence in the cities of his native Yorkshire, and worlds of soaring wonders beyond the future seen in dark explorations of jewelled catastrophes. Flavoured by a fascination for mix ‘n’ match culture, here is poetry that achieves (to quote K.V. Bailey’s foreword) ‘immaculate structuring ... accomplished musicality’ and above all, the energy and sense of wonder that brings back startling revelations from the intersection of two planes of outstanding vision (STEVE SNEYD)
Available NOW from HILLTOP PRESS
4 Nowell Place, Almondbury, Huddersfield, W. Yorks HD5 8PB, ENGLAND
ISBN 0-905262-27-1 £3.99 / $8.00
Coming Shortly from the same author
‘BEAST OF THE COMING DARKNESS’ a dark Far-Future Science Fantasy novel of visionary scope, in the tradition of Jack Vance’s ‘DYING EARTH’, Leigh Brackett’s Martian fantasies, Robert Silverberg’s ‘MAJIPOOR CHRONICLES’, and Moorcock’s ELRIC sagas
Still Available from the same author
‘I WAS ELVIS PRESLEY’S BASTARD LOVE-CHILD’ anthology of 20 years of Music journalism, featuring interviews with The Kinks, The Byrds, Fleetwood Mac, Kraftwerk, Grace Slick, Stone Roses, Can, Cabaret Voltaire, Siouxsie, Led Zeppelin and many others
Posted by Andrew Darlington at 18:17 No comments:

Labels: A Word From Our Sponsor...
RIVER DEEP, QUASAR HIGH
First there’s the problem with the wife, the ex-girlfriend,
and the potential girlfriend. But even more pressing is the
predicament of finding yourself a prisoner in your own chest,
now that’s when things really start getting strange…

Posted by Andrew Darlington at 17:58 5 comments:

Labels: Fiction
Two Albums by JOE WILKES:-
‘SPOTLIGHT’
(Vida Music VMCD 006)
Comparisons are odious. And Joe’s probably already hacked-off with the ‘great lost Nick Drake’ album tag. The title-track fades in from nothing, building on graceful discord before dissolving into stinging acoustics buoyed by mystically airy string arrangements. Only Joe’s refreshingly-roughened vocal delivery and the resonant double-bass compensate for those immaculately tasteful string quartet sections, reconciling roots with a glistening spin-free modernity. All indicating that ‘his path’ – as he phrases it, ‘is way beyond the border’. “The Castle” alludes to the ‘sweet medicines’ of cocaine, wine, and mythological archetypes from Katherine Hepburn to kings & queens, where woodwinds lurk in entrancing weaves that surge and ebb around smoky vocals. Then “This Time Won’t Last Forever” takes ‘photographs of urban landscapes’, with the uncertainty of his relationship expressed with smooth mid-tempo assurance. This is Joe’s first album, although there were a couple of more poppy EP’s with his former band – Casino Pil, before he drew up his ‘Ten Limits’ manifesto (inspired by the Dogme95 movies). A principled stand defined by real organic instruments and no studio mix-trickery. Ten tracks that might at first suggest John Martyn, or the neat Bert Jansch fingering of “Infra Red”, or… yes, Nick Drake. But after a couple of plays, no - they all just sound like Joe Wilkes, spinning the kind of poetics that have you hunting for the lyric sheet. Only there isn’t one. So you concentrate. These are songs made of enigmatic secrets and oblique tales, painted shadows and time-passages. He’s a vagabond heart, a smudged boho, a darkly-tousled troubadour. ‘I am a liar, I am a thief’ admits the ‘spotlight kid’. Then harmonica, clarinet and giggles wend into “Too Late To Pray”, a more paranoid political take on the USA, evolving out of his parents hammer-&-sickle inclinations into an edgy need to just smash something. Yet without the need for any mood-interrupting heaviness. Finally, “Tomorrow Whatever” is a bryter layter take on summer in the city, where the traffic crawls like a river, with possibly dark undercurrents swirling in its throw-away ‘Hey, whatever’. The ‘great lost Nick Drake’ album? – naw, more, perhaps, with acoustics being the new black, this might yet prove to be the acceptable face of James Blunt.
REVIEW BY ANDREW DARLINGTON
On website:-
‘SOUNDCHECKS MUSIC REVIEW’ (June 2006 – UK) www.soundchecks.co.uk

Review of:-
‘HERE ON THIS FRONTLINE’ by JOE WILKES
(Vida Music VMCD 007)
‘If I Could Change Everything, I Wouldn’t Change Anything’ is a neat song title, but in Joe Wilke’s case, it’s not exactly accurate. Since ‘Spotlight’, his 2007 debut, his sound has become a touch more strident, more committed, even more extreme, to match the wrap-around ‘There’s A Riot Goin’ On’ sepia artwork. There are delicate arty chamber-Folk noodlings with a haunting minimalist wind quintet and violin, or a smoky boho Euro-ethnic melancholia with gipsy accordions, and girl-voice harmony (on ‘The Making Of A Fool’) but even with its classy classicisms the essential tone is acoustically downbeat, starkly reflective. The continuity is that, as before he’s strong with words, and knows how to spin them to effect. The title track deals in patriot games as far back as ‘fighting with the anarchists’ in 1936 civil war Spain. But he’s just as sharp nailing complacency to Dubya (‘As It Comes’), or paraphrasing the Pistols with ‘England’s Scheming’, which asks why we ‘in the 51st State… imitate things that we used to hate’. A rhyme I’ve got considerable time for. Unique and remarkable, Joe’s frontline splices the personal with the political, with the issues and the eclecticism to encompass it all.
REVIEW BY ANDREW DARLINGTON
Both albums from - Vida Music Division, Ground Floor, 66 Manor Avenue, London SE4 1TE (Tel: +44(0) 7903 122 084)
Or visit info@joewilkes.co.uk myspace.com/joewilkes

Posted by Andrew Darlington at 17:23 No comments:

Labels: Cult Albums
‘ARE YOU MAN ENOUGH (TO BE A WOMAN)...?’
Punk throws up an outrage of vividly unconventional performers.
Wayne County - for example, first toured as front-man with the Electric Chairs.
Then - after the sex-change, her tour is a more flamboyant experience entirely...
Gig Review of JAYNE COUNTY
& BOAB DIDJERIDU at the ‘Duchess Of York’, Leeds
I had too much to dream last night... must have been something in that ratatouille I ate. I swear I saw Ianto Thornber in a ‘PIG LIBERATION’ sweatshirt playing electric didjeridu! A deeply rasping, sonorous, resonance. A growling vibrating that physically ripples striates of stagnant Club air into tumbling tribal images from ‘Picnic At Hanging Rock’, Croc Dundee, Fosters Lager ads, Rolf Harris... you name it. If this is what they mean by World Music then it’s from some world the ‘Voyager’ space-probe has yet to reach. It creates hypnotic mantras of mythic intensity dredged from some primal race-memory sunk fathoms deep in the subconscious to shimmer in unearthly spirals. Ianto - from Wales, and part of the ‘Knock On Wood’ ensemble, plays his own “Why Don’t You Ask”, attacking Australian white oppression of Aborigine lands and culture, and it’s stunning. It’s then that things get REALLY odd!
Joan Rivers on acid? Jayne (nee Wayne) flounces through storming tape-machine distortion, a blonde TV outrage in pink negligée and flowered tights, an out-take from a Warhol Factory movie auditioning for televisions’ Grey-Power Sit-Com ‘Golden Girls’. She opens with a statement - “Are You Man Enough (To Be A Woman)...?”, making it comic self-ridicule, but also a tackily defiant lyric manifest, “I am what I am / and I don’t give a damn”. Last time she played Leeds, supporting U.K. Subs, she was canned off. Tonight, she’s irresistible. ‘Let me look at you’ she teases, ‘let me see who I’m playing to. Um, yeah... trash! That’s who I’m playing to - TRASH!! But that’s alright. I’m the Queen of Trash!!!’ She is too. Her take on the Swingin’ Medallions’ acid-punk classic “Double Shot (Of My Baby’s Love)” rips your head off, then a taped Armageddon roar leads into more tease and camp than ‘Performance’-era Jagger or ‘New York Doll’ David Johansen ever dared, more convincing than Divine or Sylvester ever dreamed of. She follows “Xerox That Man” with her ‘bit for Glasnost’ - “I Fell In Love With A Russian Soldier”, done in her ‘political dress’ of whore-red chiffon. Jayne, a survivor of New York Punk, the Electric Chairs, and a sex-change, scored cult hits with “Toilet Love”, “Bad In Bed”, and the cause-celebre “If You Don’t Wanna Fuck Me, Fuck Off”. Tonight she’s a seamless dream on a video screen. ‘You look like a roadie for Gary Puckett’ she jibes, cruising the audience, before dedicating the Barbarians’ “Are You A Boy Or Are You A Girl” to a truckload of Southern Rednecks who tried to shoot her up in 1966, taunting ‘you can NEVER keep up with a Trannie’ as a parting shot across the years. Eat your heart out Debbie Harry, Tracey Tracey, and Wendy James.
Stepping out into the Leeds night afterwards is like waking up. Must have been something in that ratatouille.
BY ANDREW DARLINGTON
Posted by Andrew Darlington at 17:18 4 comments:

THE THING FROM INNER SPACE 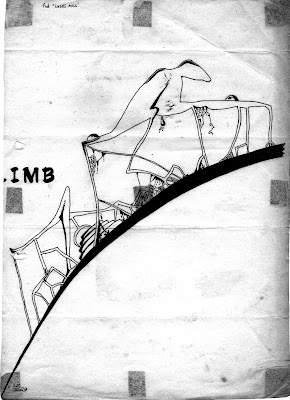 THE THING FROM INNER SPACE /
SKATEBOARDING ON THIN ICE
but
when I finally get you upstairs, I find
the cat’s thrown-up across the duvet,
&, as you half-turn in the half-light to undress
I shimmy the cover aside
sideways
so you won’t see,
skimming my thumb in
puke-tinted cat-splatter…
&
how I’ve ached for this moment, but
now when it should be so right
all I can think
(as I wipe my hand on the carpet)
is of that OTHER pussy, &
how I’d like to break its
fucking fur-lined neck…
but
now I’m beside you, inside you, yet
near-wilting at thoughts of
freshly disturbed
cat-sick radiation that must be
spreading like feline Chernobyl-vapours
stagnant with the stink of sour milk,
decomposing pilchards, & perhaps even
some half-digested small
rodent...
…and no,
the earth didn’t move
but afterwards,
sneaking nude down
the dark stairwell to
flush away the condom,
thinking dark thoughts, by now
convinced that this is deliberate
4-legged revenge for the crime
of neutering,
it’s my bare toes
that first
encounter
the dog-crap
in the hall
… &
they call
THIS
safe sex…?