THE GIRL WITH THE LAUGHING TEETH 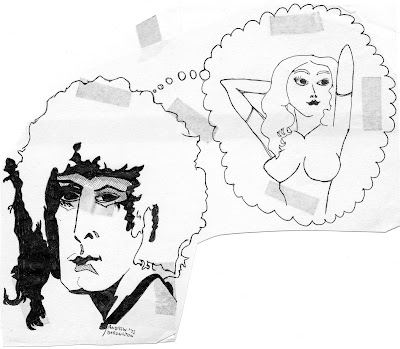 THE GIRL WITH LAUGHING TEETH /
A CONTEMPORARY LOVE SONG
Since I saw her smile on the in-store screen
in the counter display for facial cream
I’ve known that we’ll be more than friends
- until the promo campaign ends.
She’s in an ad. for Mary Quant,
got everything this boy could want,
I’d give my T.V. with remote control
to drive my motorcade to the soul
of the girl with the laughing teeth.

Got legal pills to wreck my head,
an electric duvet and a water-bed,
a 48k with four-colour graphics,
an electric Segway for use in traffic,
but in that ad. for Mary Quant
she’s got everything this boy could want,
and I’d trade all my consumer possessions
for just a hint of sweet affection
from the girl with the laughing teeth.

I watch the smile that curves her lip,
the smallest flick of her tongue-tip,
then I wait till she comes round again
on the in-store tape that never ends,
and as she smiles my pulse beats faster,
I know I’m heading for disaster
but before she’s gone I’ve got to touch
that flawless skin I love so much,
the girl with the laughing teeth.

(Perhaps if I’d have kept my cool
I could’ve half-inched the video spool?)
…but as I’m escorted from the store
I turn to glimpse her just once more,
my girl with the laughing teeth.