‘SUMMER IN LEEDS:
FAIRYTALE OF NEW YORK …’
Gig Review of: SHANE MaCGOWAN & THE POPES
and GOATS DON’T SHAVE
at ‘Heineken Music Festival’, Leeds - 23rd July 1995
I’ve seen odd, and I’ve seen odder. This is the oddest. Shane announces Kirsty MacColl, and kisses her hand as she comes on. They go into “Fairytale Of New York”. But when they get to the mid-point mutual abuse bit Shane crashes the lyrics. Skilfully Kirsty grabs bits of the splintering song and redirects them back to the chorus so they can try it a second time. He muffs this re-entry too, and again Kirsty takes it back chorus-wards. They don’t risk a third take, waltzing slowly around the stage instead as the Popes churn on determinedly to the bitter end. There were riots down the road in Bradford’s Manningham Lane. There were riots round the corner in Leeds’ Hyde Park. The only riots tonight come in slightly boozy but crazy dance-steps. And it starts with compere Tom Robinson – in ludicrous black shorts, introducing Goats Don’t Shave, and them swirling into a Dylanesque “Love Will Find A Way”. The girl in front of me wears a T-shirt saying ‘FOLK YOU’, and they do, infusing electric Donegal energies with shafts of reggae and even a sly pinch from the Outhere Brothers. Everybody say ‘Wayo’, indeed! Betweentimes they do “Accidents” – a social realist text on domestic violence, and “Walls” – ‘these walls must fall…’, with an angle on the Northern Ireland Peace Process. The Goats close with “When You’re Dead, You’re Great”, only to get an approving name-check soon after when Shane lurches unsteadily up to the mike. He does a roaring “Nancy Whiskey”, then slurs ‘this is an old Neil Diamond number’ and Ivan Ooze’s through “Crackling Rose”. Of course Rosé is a store-bought woman who comes in a bottle from a place where streams of whiskey are flowing, but each time he gets to the build towards the title he loses a line, and substitutes it by doing the next line twice. Then there’s the ‘slightly jazzy version’ of “Fairytale Of New York”, and… “Hippy Hippy Shake”! He obviously enjoys this so much he does it again in the encore, twisting grotesquely with a demonic grin through a dental Stonehenge. It’s somewhere around here that Shane leans across to guitarist Paul McGuinness and stage-whispers ‘what’s next?’ The Popes are tight. Tighter and harder than the Pogues ever were. They construct the rigid framework within which Shane wanders. And it works gloriously. The drums they go a-rat-a-tat-tat, ‘Jimmy Riddle on the fiddle’ soars, and they rampage through the back-catalogue, stopping off at “If I Should Fall From Grace” and “Irish Rover”, before powering up with a metallic “Baby Please Don’t Go” – ‘an old Van Morrison number’. Four songs into the encore, around the time of “Bottle Of Smoke”, Shane aerobically whirls the mike-stand around his head, as if to demonstrate his surviving skills of co-ordination. It might be great when you’re straight, it’s even greater when you’re Shane. ‘Than-yew’ he says in his speech-impediment slur.
REVIEW BY ANDREW DARLINGTON
Posted by Andrew Darlington at 06:34 2 comments: 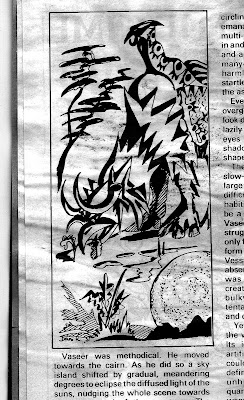 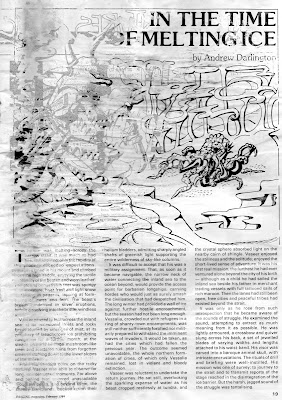 EXPERIMENTS ON A
MONETARIST LANDSCAPE /
ANNIHILATING ANGEL
1:32:25
wrapping myself
drunk
round the toilet
&
going to sleep
2:10:09
while I sleep
sandstorms on Venus
gouge holes in
the surface
of sound
2:39:46
waking
to find
glow-worms
beneath
the rim of
your eyes,
&
England
in flame
from
end to end
3:02:11
sleep,
dreams coming
like radio tunings
in a speeding car
threading a web
of underpasses
in a city
of flame

3:33:52
waking from
Martian cities,
opal obelisks,
sea defences breaching,
& a voice
in my head
telling
‘paint fire
as though
you’ve become
fire itself’
3:52:33
I listen
to your skin pop,
now we’re part
of a filmic process
that’s lost
in a
CGi animé,
these are frames
without horizon,
this is a
new agenda
for neo-spatial
awareness,
&
the
annihilating angel
is igniting
your eyes
4:02:21
we burn,
I make
your body burn
as though
we’re fire itself,
until the
glow-worms
beneath
your eyes
explode

Labels: POEMS
Album Review of:
‘ICARUS RISING: THE CRESTED VULTURE TAPES’
by ICARUS LANDING (STEVE SNEYD & DAVID JAGGAR)
(Crested Vulture Disks CVD-001 - £6.50 –
Hilltop Press, 4 Nowell Place, Almondbury, Huddersfield HD5 8PB)
Blues from the Calder Delta. Legendary word-of-mouth underground performance-art duo Icarus Landing, long-thought unrecorded and forever lost, finally resurface. With a flood-damaged seventies tape, cleaned-up, digitised, and completely amazing. An audio artefact of smoke-hazed Folk Clubs and moist beer-mats, where sweat drips from the ceiling as if in some time-capsule monochrome photograph. Dave Jaggar, he of Spider Lee Brown and the Champion Jack Dupree Band, plays dextrous guitar and – on “Trowell, Midnight”, harmonica, with Blues improvisations providing space for Steve Sneyd’s flights of poetic wonder, delivered in a thick monotone the colour of Pennine Bitter pointed up by slurs of betraying Yorkshire inflections. Together, they pick up the rambling cadences of half-glimpsed and never-quite-concluded back-street pub people-stuff conversations and ignite them with surreal absurdist sense-of-wonder, from skew-wiff mythologies of visiting Martians, to the scrap-dealer clearing the Rhodes Colossus from where it blocks the harbour-mouth, the girl who half-inches cutlery from Motorway Service Stations yet only gets randy ‘for men with ideals’, the man on his ninth pint waiting for the girl who never turns up, then the puddled walk home uphill singing ‘Careless Love’ off-key. Like the line ‘crooked, as a ring around the moon’ – a ring, of course, is not crooked, but what they’re about is reconciling contradictions. These performances are unforgettable, like scars.
REVIEW BY ANDREW DARLINGTON
Posted by Andrew Darlington at 22:51 No comments:

Labels: Cult Albums
Book Review of:
‘PREMONITIONS: CAUSES FOR ALARM’
Edited by TONY LEE
(Pigasus Press - £5.95 – ISSN 0968-6185)
www.pigasuspress.co.uk
From the ‘Post Flesh’ cyber-art cover to the ‘Subterranean Gallery’ of dark slipstream texts within, this unsettling compilation of ‘Science Fiction, Horror Stories & Genre Poetry’ provides vivid vindication of the enduring power of print. David McGillveray’s “Revisions” is essentially a traditional SF tale of human colonists on an alien world, and the dreadful secret that lies within the remains of the Heechee-like extinct civilisation around them. Edinburgh-born McGillveray takes the familiar back-story ingredients of the AI-enhanced colony-ship with its crew in suspended animation seeking habitable planets, but renews it with Ornithological Archaeologists transcribing the sounds of enchanting chatterbirds who parrot the conversations of the Mileshlu dead, in attempts at piecing together the history of the world’s original inhabitants, and the secret of their demise. Well-drawn characters match pacey narrative to make the eventual truth - as the chatterbirds re-scream the alien’s final moments, both entirely logical, and strangely moving, posing the issue of a society surviving the legacy of genocide as relevant as the American extermination of its own native tribes-people. Fred Walker’s “Tentacles” extends its fictional roots yet further back to artfully craft a ‘Weird Tales’ replicant complete with carnivorous grandfather clock. While William Jackson’s darkly satirical “Mould & Mildew” charts the relationship arc from mediaspeak seduction to the Motel of Absolute Denial. Jim Steel’s “Jaw Jaw” postulates a ‘Neuspeak’ digital language, corrupted by the machine-logic scheming of its cuckolded protagonist. Sue Lange’s “Jump” is another more downbeat New Wavey Tank Girl take on a suicide-outbreak in a cityscape of urban disintegration. There’s more fiction too, buttressed by images of vast poetic eternity from Steve Sneyd, Cardinal Cox, JC Hartley and others. The one-off fiction anthology, and its speculative sub-genre, are currently in a weird place. Stalled between online attractions and big-name book-promotions. Here, the spread of themes spiralling a common nucleus, is a reminder just how virile and valuable a format it can be.
REVIEW BY ANDREW DARLINGTON
Posted by Andrew Darlington at 22:44 2 comments: