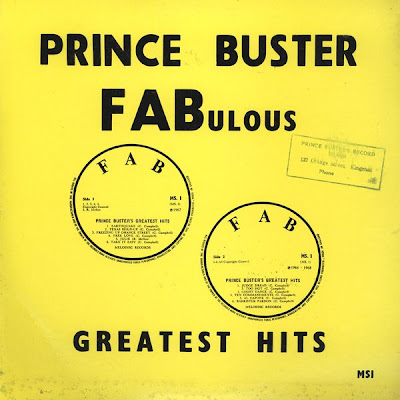 ‘ONE STEP BEYOND…’
Album Reviews of:
‘PRINCE BUSTER:
FABULOUS GREATEST HITS’ (Sequel)
‘PRINCE BUSTER ON TOUR’
and ‘BIG FIVE’ (Westmoor Music CD’s)
by PRINCE BUSTER
‘AL C’PONE’S GUNS DON’T ARGUE!’ A startle of sten-gun fire. A screech of tortured tyres. And then the rhythm. That perfect ooze of sensually loping Bluebeat rhythm…
The sixties Mod Scene may have been many things – elitist, narcissistic, pill-scrambled and ego-centred, but alongside its early championing of Stax/Motown imports, it was perceptive enough to recognise the nascent energies of black creativities closer to home. That raw stew of R&B jive that mutated into Ska, Rock-Steady, and – eventually, into Reggae. But meantime, no self-respecting Lambretta pillion was complete without the visual flash of Ska-Face Prince Buster’s ‘Fabulous Greatest Hits’. A decade-and-something later it was rediscovered in the bleak environs of recession-hit Coventry, and shocked back into the charts through a new Mod generation of manically inspired Two-Tone covers. Madness started out as “Madness” – the title of a Prince Buster single on Bluebeat BB170, and a featured track on ‘On Tour’ (originally issued as Bluebeat BBLP808). Just as their “One Step Beyond” was the original ‘B-side of the sublime “Al Capone” (BB324) – opening cut on ‘Fabulous Greatest Hits’, and the first-ever Top 20 hit for Emil Shallit’s Shepherd’s Bush based Bluebeat label…
Cecil Bustamante ‘Prince Buster’ Campbell – never a particularly accomplished musician himself, had worked his way up through Coxone Dodd’s sound-system as DJ into early notoriety as songwriter, toaster and singer in his own right. He used the cream of Kingston players, honking and blaringly dissonant brass with production effects often anticipating Dub, which oddly found even greater acceptance in Britain – where he recorded with members of the Georgie Fame Band, and even in the USA, than he did at home in Jamaica. While all his best Rude Boy moments, all you REALLY need to know about Prince Buster, can be found on the ‘Fabulous Greatest Hits’ – “Judge Dread”, “Free Love”, “Too Hot”, the outrageously cod-macho “Ten Commandments of Man”, the bizarrely unstructured “Ghost Dance” (‘…give him my regards, / tell him Prince Buster says ‘hello’…’) and the mega-bragging “Earthquake”. On the strength of such a pulsating roll of offbeat power he played a seventeen-date British tour through April into May 1967 including such unlikely venues as the Reading College of Technology and the Ritz Ballroom Swansea, as well as the Brixton ‘Ram Jam’ Club and a ‘Ready Steady Go’ slot. His ‘Prince Buster On Tour’ album was supposedly taped from these gigs but is actually a London studio romp with added sounds provided by a tiny invited audience dubbed across “Al Capone” (again), “007”, “Sound and Pressure” and a most outstanding outing of “Cincinnati Kids”. ‘Great for your Mod parties’ opined the ‘Record Mirror’ review at the time of its first release.
Unfortunately, by the time he got around to recording ‘Big Five’ (originally Skank Records SKA BB3, from 1970) the buzz had gone elsewhere. The teasing sexism of “Ten Commandments” had become grotesquely risqué, a nudge-nudge-wink-wink zone better exploited by cheeky newcomer Max Romeo. Even Buster himself later admitted dissatisfaction with material like “Sister Big Stuff”, “Wash the Pum Pum”, and “The Virgin” – mutilating Ewan MacColl/Roberta Flack’s “First Time Ever I Saw Your Face” with lyrics that go ‘you should have told me it was your first time, my love, / I would play around the edge, / tickle the little thing and make you sing…’. Or the title song ‘today I smoked an ounce of weed, / tonight I’m going to plant a seed / in her womb, alright’. Bluebeat seldom came bluer.
Buster’s been off and on various catalogues ever since their vinyl debut – including Melodisc, Skank and Spartan, but eventually the Prince also made CD status in time to spark a third Ska-wave. With the sounds digitally-preserved as crudely earth-quaking as ever, plus the bonus of loving reproductions of the original cut-and-paste album sleeves. Sure, you can listen to the latest Ragga and Two-Tone compilations, but do yourself a favour, skip back to ‘Fabulous Greatest Hits’ too, and re-groove into ‘my name is KERPOWN! C-A-P-O-N-E! DON’T CALL ME SKA-FACE…!!!’
Posted by Andrew Darlington at 23:44 1 comment: 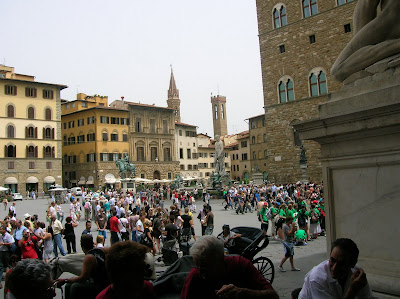 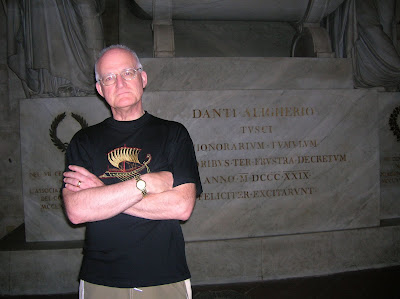 STREET-ARTIST IN THE SUN
(Tuscany, May 2008)
as you pass me by,
feed me euros,
buy my art…
he sits
he sits by his easel
he sits by his easel in ridged dreads & facial piercings
he sits by his easel in the Piazza Della Signoria
he sits in Florence’s city of 1,000-year’s art,
he sits and applies raw sienna smears
over rufous blooms & pale saffrons
sticky with ripe & rotten colours
in tides of bottomless green wash,
he sprays in crushed ochre stipples,
crimson lakes seep into his canvas
below burnt umber skies,
as tourists pass him by
towards the Uffizi &
Cappella Medicee…
buy my paintings
feed me your euros,
the dead don’t need them,
but tonight,
I must eat… 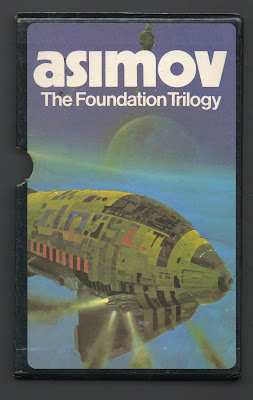 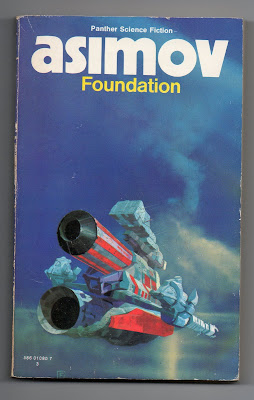 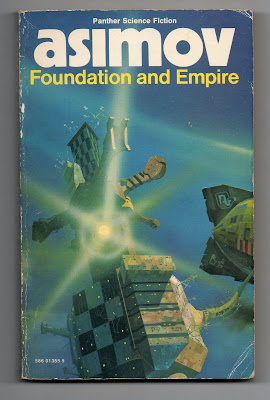 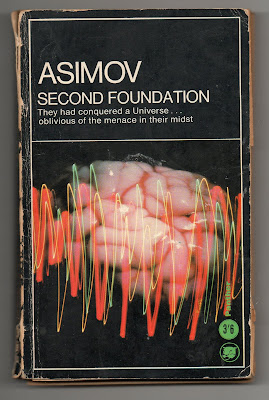 The Troggs: Live In Ossett 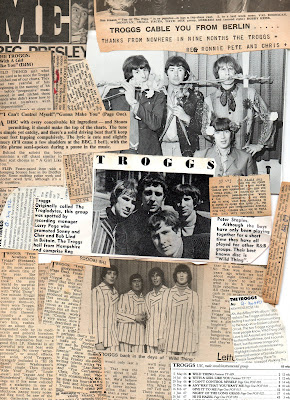 ‘OOOHHHH
NO-O-O-O-O-!!!!!!’
The Troggs Live at ‘Woburn House’
Ossett, West Yorkshire, 1987
It’s 1966. Heather is seventeen. She works in the print-factory packing department where she fancies the shy apprentice, despite his acne. But more than that, she has a fixation with Reg Presley. It’s something to do with the pudding-bowl fringe, something to do with the puppy-fat, but mostly it’s to do with the way he stands, mike in hand, with candy-striped legs splayed. ‘Twenty-one years. Phew!’ A muted Dorset accent whistled through clean white teeth. ‘TWENTY-ONE YEARS!’ like even he can’t believe it’s been that l-o-n-g. White jacket, black shirt, white sneakers, black pants, centre-parting – but still the puppy-fat, still the splay-leg stance like an inverted y-chromosome. ‘D’YER LIKE SIXTIES MUSIC?’ yells Presley. ‘NO’ retorts a smart-arse in the audience. ‘KILL! KILL!! KILL!!!’ he snarls, brandishing the mike-stand like an armalite. Heather bought the albums ‘From Nowhere… The Troggs’ (Fontana TL5355, July 1966) and ‘Trogglodynamite’ (Page One POL001, February 1967). Played them on her Dansette till her Mum confiscated the stylus. She remembers young comedian Ted Rodgers on ‘Sunday Night At The London Palladium’ spoofing their second hit “With A Girl Like You” as ‘I’d like, to send my wife, to Whipsnade Zoo’, she pretended to be offended, but secretly thought it was a bit of a giggle. But most of all she loved “I Can’t Control Myself”, the third (and last) of their Top 3 singles, opening up with its anguished hyper-kinetic howl ‘Oh No!’ and fading out into an extended tantrum-scream of impure teenage lust, dumber and truer than Punk. Jonathan King arrogantly jibed that the group wouldn’t survive the year out, and bet a champagne supper on it. He had to honour that bet when the hits kept coming. She thinks those tracks still sound good, even here in tonight’s immaculately plush supper-club ambience. Anyway, she prefers the lush soft-core romance of “Anyway That You Want Me” to the switchblade amped-up R&B attack of “Louie Louie” or “Walking The Dog” which someone says sounds raunchy enough to be the Feelgood’s, or maybe the Prowlers. And she smiles at “Strange Movie”, the hard-core ‘dirty’ song she understands better now than she did then, all that skinflick mate-trade grunt-grunt-grunting. Seems like so long ago since she settled for the print apprentice, and married him. Not that it’s bad, because it’s not. Just that there’s still something there about Reg that’s a bit special. Later, she’ll find it strange that the Troggs original version of “Love Is All Around” only peaked at no.5, while the Wet Wet Wet reboot, with little tinkering, sits at no.1 for something like fifteen weeks. It seems unfair. Probably something to do with the 1994 movie ‘Four Weddings And A Funeral’. Not that Reg cares. He came out of it fine. Tonight, she thinks he looks… nice, too, but can’t recognise the bass-lead-drums behind him – can that really be drummer Ronnie Bond? Naw. She likes the way Reg intros “The Yella In Me”, the neglected first Troggs single (‘B’-side of Reg’s song “Lost Girl”). Recalls how she stayed up late until 03:00am on the promise of a Luxembourg play, then fell asleep and missed it. But the intro to “Wild Thing” is still neolithic, less a song than a primal riff, Chip Taylor’s manic minimalist paean to hyper-sexual frustration – which has been covered by Jimi Hendrix, and the Muppets too, but THIS is THE ORIGINAL. And it is. Heather enjoyed tonight, on balance. As she retrieves her coat, she thinks she might come back next Saturday. The Searchers are here. She always had a soft spot for Mike Pender’s smile…
Posted by Andrew Darlington at 21:31 No comments: