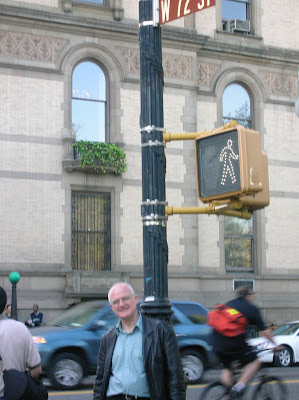 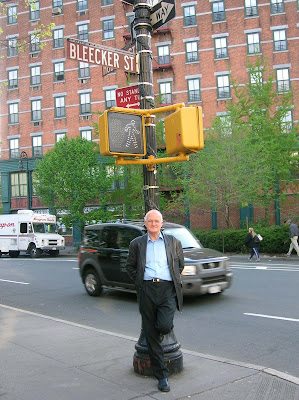 FIRST NEW YORK POEM:
WHIRLWIND TOUR, WITH WEDDING
(ONE THOUSAND VALUABLE SECRETS
IN THE ELEGANT AND USEFUL ARTS…)
“fog’s rolling in off the East River bank
like a shroud, it covers Bleeker Street…”
(Paul Simon)
i’ve never been here, but
i’ve paced these streets before,
i’ve never seen this woman on the
subway rapping at no-one in particular
how black labor built America, how that
pyramid on the dollar bill, hey wise up,
it’s African, then the contra-voice against
the conga-drummer down-carriage complaining
all I want is a damn subway ride home, I don’t sign
up for no lecture, & me that what she’s saying is
obviously so, but why the need to say it now?
until the instant community dissolves
at 34th St Penn station halt…

i’ve never been to this
Amish deli in the Battery sun
where we lunch on vegi sushi, or where a duo
busk ‘Norwegian Wood’ on Strawberry Fields,
or the $60 cab-ride through Queens where the driver
scrolls over from Nashville to BBC World Service
(for the best African news!), where there
are spires that into the moonglow rise, &
we cross the scars of 9/11 across Vesey,
i’ve never been here, but
i’ve paced-out each footfall
in poems & TV-news & movies
in poems & novels & song-lyrics …

i’ve never been here, but i know
Bleeker through Washington Square,
where the bright hoardings crawl
& there is nowhere stillness, where
Bran & Stephen watch the Hudson
from their 15th floor Embassy Suites across
to NJ with Mingus on the jazz-station,
where street-signs suggest songs
that linger back in echoes from every
storefront and basement bar…
i’ve never been here
but somehow, I’ve
never ever been away

Posted by Andrew Darlington at 18:42 No comments: