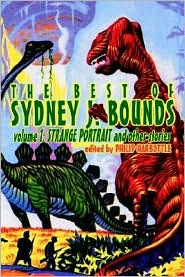 ‘OUT OF BOUNDS…’
Book Reviews of:-
‘THE BEST OF SYDNEY J. BOUNDS
Volume 1: STRANGE PORTRAIT’
& ‘THE BEST OF SYDNEY J. BOUNDS
Volume 2: WAYWARD SHIP’
by SYDNEY J. BOUNDS
edited by PHILIP HARBOTTLE
(Cosmos Books - $15.99 each - ISBN 1-58715-516-8 + 1-58715-517-6)
Sydney J. Bounds (the ‘J’ is for James) is a writer. This double-pack of strange tales cherry-picks from over half-a-century’s production. The first story – his debut professional sale under his own name (there had been earlier aliases) is from ‘Outlands no.1’ dated Winter 1946. This macabre “Strange Portrait” uses a ‘Dorian Grey’ hook in which a ‘living’ painting acts out the murderous jealousies of artist David Guest. Yet such weird tales are only one aspect of a diverse life-time’s fictional output. Sydney Bounds also writes for that most neglected of genres – the Western, with some twenty prairie-pounding titles currently in print. As well as crime, becoming ‘Brett Diamond’ or ‘Ricky Madison’ for Hank Janson-style Gangster novels, as well as contributing to the long-running ‘Sexton Blake’ series. There were also flirty ‘Peppy Stories’ and very soft-core ‘Snappy Stories’ titillation for ‘spicy’ magazines, plus a profitable parallel line in juvenile fiction, horror and fantasy. Inevitably, there are style cross-overs slip-streaming from one sub-genre to another. “Grant In Aid” from a 1956 issue of ‘Authentic SF’ adopts a mean-streets hard-boiled Gumshoe Detective voice, ‘I had my feet up and a bottle tilted to my lips when the door opened…’ The denouement is alien. The plot development pure Crime Scene Investigation. Social change also instils its own oddities. “Project Starship”, a novella from a 1954 ‘Nebula’ is a fine story set in a subterranean experimental colony on Pluto. Unusual for its time is its emphasis on strong character motivation over hard science. Even more unusual for our time is the gender divide, in which male engineers labour on the two-mile-high generation-ship under construction, while the ‘Stepford Wives’ busy themselves with coffee-mornings, dusting, and fashion. As you read you envisage them in bouffant hair and flared skirts. No Ripley’s (of ‘Alien’), Lara Croft’s (‘Tomb Raider’) or 7-of-9’s (‘Star Trek’), yet they use feminine wiles and resources of a different order to achieve their ends. When husband Russell Cazalet is unable to force production schedules, neglected wife Katherine gossip-networks pester-power with the other wives to accomplish what he can’t. He resents her success. It’s only the final crisis that reconciles his injured ego. But essentially it’s a human story built around the restrictions of strict 1950’s nuclear family gender-role models. Not even retro. That’s exactly how it was.
Yet from the same year, “Portrait Of A Spaceman” (‘New Worlds’) features career-woman Jill Hardie, an investigative reporter deconstructing the ‘Right Stuff’ myth of the hero of the ‘Martian Queen’ tragedy. Uncovering the truth, she prefers to allow the myth to stand. While “Act Of Courage” (from ‘Authentic SF’ 1956) more modestly recounts an attempt to climb the lunar Mount Pico with guide Bill Salmon hired by bickering rich couple Vivian and Alison Pascall. Hard moon landscapes and well-sketched human psychological antagonisms match the expedition’s detailed hazards, until its eventual success is found as much in the reconciliation of the Pascall’s marital dilemma as it is in mountain-climbing. These are all examples of what editor Philip Harbottle calls Bound’s ‘quiet revolution’, to humanise hard-SF towards a more mainstream literary content. There were American sales too. “The City” was sold to editor Ray Palmer for a 1951 ‘Other Worlds Science Stories’, following a market tip-off from John Wyndham. It’s an extravagant romp through the ‘usual suspects’ of the period – Atomic Death, radiation-warped mutants, ‘The Hall of the Brain’, Earth’s Last Sealed City in its vast translucent dome, the enigmatic stranger who ‘came out of the dust-bowl, a tall, gaunt figure in rags, who stood before the energy screen’, plus the sexually predatory rebel who desires to bear his child. Yet it’s a convincingly entertaining reconfiguration of such stock elements. This is a balance he’s proved more than capable of maintaining across the years. “The Predators” (originally available in the 1977 Italian-only ‘Spazio 2000’) is a hand-to-claw ‘Starship Troopers’ extravaganza pared down to relentless action as Lee Sabre fights and kills his way out of the death-arena all the way to hostile alien encounters at the galactic rim. An audaciously accomplished epic.
Then ‘Volume Two’ extends into Horror and Fantasy lifted from the ‘Fontana Book Of Great Horror Stories’, ‘Frighteners’, or Harbottle’s more recent ‘Fantasy Annual’ series. Stories featuring a man losing a battle with his own skeleton (“The Flesh Is Weak”), a hunchback’s perambulating murderous hump (“The Relic”), the isolation of the last “Throwback” in a world of telepaths, and ghost-voices lost in the Null-time of hyper-space, a siren-song that can only be endured by professional Schizos (“Limbo Rider”). Sydney J. Bounds is a writer. He writes for available markets. We are fortunate that so much of it happens to fall into the SF field. 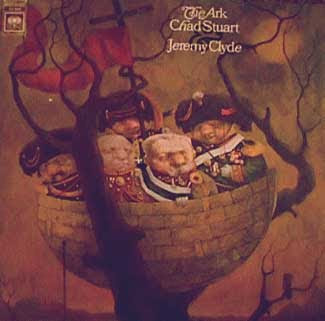 (Rev-ola CR REV 279) www.revola.co.uk
Wimp-Folk? Peter & Gordon rode in on a trilogy of cast-off Paul McCartney songs. Chad Stuart & Jeremy Clyde hung out around the Folk Clubs until CBS slotted them into the Peter & Gordon template in which guise they scored an American Top Ten hit with the winsome “Yesterday’s Gone”. Win-some, lose some, the polite well-bred lean-faced duo with their new California tans guested on the original and the best ‘Batman’ TV-series, and charted a couple of lesser singles. When the hits stop they up-geared into the psychedelic-fantasia changin’ times ‘Of Cabbages And Kings’ complete with its five-movement ‘Progress Suite’. Then, despite its large-scale failure they followed it with this – ‘The Ark’ (August 1968), produced by Gary Usher, and their final major-label moment before getting dropped. With its title both a reference to Noah’s Biblical flood and a metaphor for the world’s renewal, this quintessentially English carnival of ornate baroque sixties Pop, with swooping woodwind, harpsichord, multi-layered vocals, anti-war nudges, sitar and soft seashore-effects, assumes all the correct poses without ever actually contributing the vital alchemy to shove it over the edge into greatness. “The Emancipation Of Mr. X” is one of those well-respected men who take off their business suits to rediscover their inner child and go skinny-dipping in the park. There’s a “Letter To A London Girl (Transatlantic Trauma)” from Boston, complaining that Chad’s uptight and Jeremy broke two strings on stage. There’s “The Raven”, a strained chamber-Folk string-quartet. A ‘Sidewalk Requiem’ which – although not stated as such, commemorates the shooting down of Bobby Kennedy at the LA ‘Ambassador Hotel’. Titles such as the decorous acoustic instrumental “Pantheistic Study For Guitar And Large Bird” promise more than they deliver, there’s some of the fey delicacy of Simon & Garfunkel with little of the poetic precision, while the closer “You Need Feet” is one of those irritating silly-voiced novelty vaudeville sing-along tracks you tend to skip over unless sufficiently stoned to find it amusing. Inevitably, over the years since, the ‘I-can-be-more-obcure-than-you’ archivist tendency has elevated these twelve-inchers into lost gem status, instigating a reunion tour, and this digital expanded reissue, inviting reappraisal. So is it the masterpiece cultists claim? Well, depends on your definition of classic. Maybe, like he says on ‘Feet’, it’s not to be sniffed at. While certainly Peter and Gordon never got this high on vinyl!
Posted by Andrew Darlington at 19:53 No comments: