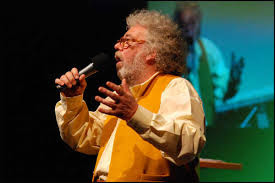 Event Review of:
FELIX DENNIS:
DID I MENTION
THE FREE WINE…?
TOUR 2004
at ‘The Wardrobe’, St Peter’s Square, Leeds

Can a poet BUY Literary credibility? The ‘Wardrobe’ is one of the nation’s Top Fifty Bars according to an ‘Observer’ guide. A ‘New York’-style Jazz Bar hung with moody monochrome photos of Miles Davis, Francis Bacon, Bobby Darin, Roland Kirk and John Lennon, frequented by the likes of Brian Auger, Marc Ribot, Sam Rivers… and me. And tonight it’s been subsumed into hosting a unique literary launch. Most poetry publishing means a visit to the nearest Mall instant-print, followed by kitchen-table collating and stapling, or perhaps – more ambitiously, that pile of five-hundred litho’d booklets you can’t get rid of stashed under the bed. But when you’re ‘maverick’ publisher Felix Dennis – listed no.65 on ‘Business Age’s ‘Rich 500’, your ‘Lone Wolf’ (Hutchinson, 2004) collection gets the full lavish print-job plus CD and tour-DVD insert, promoted through a full high-profile international tour, helicoptored to venues, with (‘Don’t Forget The…’) free wine and canapés. That don’t necessarily make the poems any better. Or – by the same token, any worse. After all, wasn’t his previous volume – ‘A Glass Half Full’ (Hutchinson, 2002), the best-selling poetry book for forty years? Sure it was. Nothing to do with the sixteen-piece road-crew, support-team audio-visual people, or the promo tour T-shirts.

He slumps down now in a grey frizz of hair and beard, saffron shirt and brown waistcoat, intoning ‘never go back, never return to the haunts of your youth’. A poem to his mother. Affectionately, and effectively attacking his parents’ generation who ‘murdered what was decent, for respectability’. Then whiplashing ‘perhaps YOU’D like to tell them Madam?’ at some lone woman who has the temerity to whisper as he reads. Born in Kingston-upon-Thames, by age fourteen he’d already been expelled from four schools (‘I was a failure at everything except cross-country running and English literature’), he drummed Howlin Wolf covers with R&B no-hopers The Flamingos (remembered in a poem that rhymes ‘Charlie Watts’ with ‘acne spots’), and worked as a Harrow County Council grave-digger. His poem “Snakeskin Boots” remembers seduction, sex, and ‘her streaming flesh aglow’ in Harrow-on-the-Hill in 1964.

He wasn’t in at the start of ‘Oz’, but – broke, and needing cash to fund his girlfriend’s abortion, he joins as a street-seller around issue no.11. To Richard Neville he was ‘younger than me, longer-haired, scruffier, with a rough-and-ready London charm’. To Felix “we were clappy-happy, we were hippy-dippy / we were building Eden by the mighty Mississippi” (a poem he shamelessly pipes through the ‘Dennis Pbl’ phone-stacking system as you await your connection). Another poem finds him on the Kings Road, 1967, in wolfskin coat, loon flares, with a snake-hipped eighteen-year-old girl by his side. Part of a revolution where ‘we talked a lot… but I’ve forgotten what we said’, and where their ‘ladies’ made the tea. By edition no.17 he was fully on-board, writing reviews and recruiting music ads for his ‘mOZic’ section, even setting up a Jimmy Page interview. As Company Director he accused Richard Neville of editing ‘for your mates with degrees’, suggesting that by not going ‘over the heads of our readers we could… triple our circulation’ (in practice 50,000). Two things are at first apparent from this. His feel for the popular touch. And his instinct for commercial possibilities. On 5th August 1971, Judge Argyle sentenced him to nine months for his involvement in the ‘School-Kids Issue’, less than his co-editors because he was ‘younger and very much less intelligent’. Yet after capitalising on the trial by lampooning it in his ‘Cozmic Comics’ he jumps the interactive CD-Rom boom with ‘Personal Computer World’ and ‘MacUser’, the next step up in building a publishing group with an estimated value of £155 million with ‘Blender’, ‘Stuff’, ‘This Week’ – and his flagship title, ‘Maxim’. Today, publishing is all about focusing demographic profiles, niche marketing, consumer-group targeting to maximise advertising spend – perhaps we’re all too fragmented and post-modern aware to launch on naiveté and enthusiasm as ‘Oz’ did. With ‘Maxim’ the radicalism extends no further than a 2005 calendar of photo-elision nudes – Margaret Thatcher, Cherie Blair and Diana Spencer. Not that he’s looking back.

He champions science, but fears its potential in “23 Roads To Hell” about Crick & Watson’s DNA, “Where Knowledge Falters” for Darwin, a “Sonnet For H2O” about life’s origins as a sea-borne ‘weeping fuse of slime’, then attacks the make-over cult of plastic surgery as ‘mad greedy fools with steel scalpels’. He even gets to rhyme ‘know not’ with ‘robot’. Because his poems all rhyme, they use traditional verse and metre structure, they are direct and narrative. They can be effective, in “White Vase” about Hitler’s suicide, ‘two figures on a sofa side by side’ (delivered with an electronic pulse soundtrack), and “Who Was The Better Man” – a competing dialogue for dead friend and fellow ‘Oz’ veteran Jon Goodchild. You might have reservations about his forthcoming customised Nursery Rhymes project, until he reads “The House That Crack Built” about his period of cocaine dependency. Less convincing are the poor little rich boy regrets, of sacrificing ‘the fawn’ of love for ambition. The mansions with room enough to lose yourself in. The pain of firing staff (in “Downsizing”). This is the man who once turned up at Marylebone Magistrate Court dressed in a school uniform. A man whose genitals have been sketched by David Hockney. A man who once chanted ‘die die’ to David Frost and then shot him live on TV – with a waterpistol. A man once articulately defended at the Old Bailey by John ‘Rumpole’ Mortimer QC. Now his poems spoof ‘all the young dudes, grown old,/ hair a whiter shade of pale,/ memories a purple haze,/ getting limp instead if laid’.

Can a poet BUY Literary credibility? Felix Dennis sings, he shouts, he emotes, his voice dips into a curiously Ben Elton gruffness for emphasis. But take away the choice of French red or white wine, the four screens (two live blow-ups, one running tie-in video, another scrolling the poems line-by-line), the podium decked out with his own lyncanthrope image, the mike and spots, the name-drops to Melvyn Bragg, Sean Bean, Courtney Love, beam him down to read a twenty-minute slot to thirty people in a grimy room over a pub… and there’s stuff here that would still work – his ‘Friends Reunited’ poem “On Attending A Reunion” written just four hours earlier, his Blues For Robert Johnson (‘I sat last night in Soho / blues falling down like hail’). Perhaps – unlike the Sancerre Blanc 2003 Domaine Vacheron, it’s only sour grapes that makes you suspicious. Perhaps, in an ideal world, new poetry would be promoted with all the razzamatazz of a Pop CD. Just that you leave wondering, how much of that good response is really down to the free wine…? 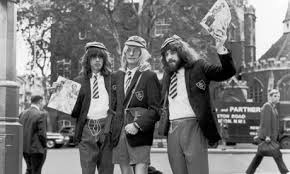 Visit:- www.felixdennis.com for more insights, and
details including video-footage of the tour

If you need your ex-girlfriend or ex-boyfriend to come crawling back to you on their knees (no matter why you broke up) you got to watch this video
right away...