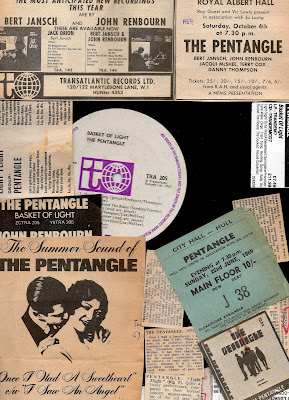 You see the cover-photo of the ‘Basket Of Light’ (1969) album? That’s the way it was. That is the formation they assume. Jacqui McShee seated centre, and to the front. Bert Jansch and John Renbourn seated to her left and right. The imposing Danny Thompson standing adjacent to his double-bass at a slight left-tangent behind them. And Terry Cox centre-rear at the drum-kit. Of course, the album-art was taken at the Royal Albert Hall, not the chill marble environs of Hull’s City Hall, but apart from that it’s pretty much identical. Open up the LP gatefold and it proudly announces ‘All The Instruments Played On This Album Are Acoustic’ – as though that’s some signifier of authenticity. As though that makes it more real, less contrived. But perhaps a little more electricity would have helped in Hull this night. Jacqui sits a space from the mike. Too much space. So that her slight, but pellucid voice gets lost in the huge emptiness of the hall.

People in the rows of seated audience whisper about not hearing her. About her inaudible voice. Even from Seat J38 (which cost all of 10/-). Comments are made to the venue staff. At the intermission – yes, there’s an intermission, a uniformed attendant appears on stage and rearranges the furniture, to a mild ripple of applause. He moves her stool a clear pace closer to the mike-stand. But when the musicians file back on and take their places Jacqui takes pains to gently ease her stool back into its original position, away from the mike. Things are NOT going to get better! Which is disappointing. Pentangle is a big deal. And this tour is undeniably the highest point of their career-trajectory.

Yet the songs cascade like soft rain around us. When they do “Sally Go Round The Roses” it is a dancing interaction between bass and guitars. A complex simplicity. Her voice so ethereal it’s barely there at all, she sings it with hands chastely on her knees, long curtains of hair cascading in around her face. She rarely smiles. Yet the song has the catchy circular quality of a kid’s schoolyard rhyme, or a ‘round’, although it actually originates with the Jaynetts, a Bronx girl-group whose version hit a US no.2 in September 1963 on Tuff Records. A luring combination of strange things seeming familiar, and familiar things suddenly becoming strange.

Then they do a dazzling “Light Flight”. Around this time, ‘Take Three Girls’ was a BBC1 flat-share comedy-drama with Liza Goddard, Susan Jameson and Angela Down as trendy singletons loose in a still-Swinging London (it lasted two seasons from 24 December 1969). There was less ‘Sex In The City’ back then, maybe, but Pentangle score “Light Flight” as its theme-song, which subsequently makes a chart showing – as high as no.43, as a result. Untypical Pop fare, its time signature darts between 5/8 and 7/8, then with nimble agility into 6/4 in the mid-section. None of which breaks the track’s perfect surface. It managed three rungs higher than its predecessor, the group’s first single “Once I Had A Sweetheart”, which harks back to Carolyn Hester, and reached no.46 in May 1969. Performed faultlessly live, this song of sorrowing loss for a faithless lover, ‘my eyes like some fountain with tears overflowed’, chimes with aching precision. But this is a time when Fairport Convention were upsetting the scene with innovatory Folk-Rock variations, taking their “Si Tu Dois Partir” up to no.21 during July 1969, with Steeleye Span and the underrated Eclection waiting in the wings. Pentangle were always a cut above. A Folk super-group.

I’d known Bert Jansch and John Renbourn since their first solo and duo albums. Gazing through the storefront glass of Hallgate Electricals in Cottingham at the album covers on display, not yet quite able to afford the Transatlantic ‘Bert And John’ (TRA144, 1966) album with its chequer-board playing cover (they’re actually playing Wei-Pi-Ki – or ‘Go’), and its enticingly risqué “Soho” ‘come watch the naked dance, that spins before your very eyes, naked like the sun’. Well, it seemed risqué to me at the time. Or the intricately baroque “Angie” and stark junkie “Needle Of Death” on his 1965 debut ‘Bert Jansch’ (TRA125) set. And John snapped sitting intensely playing acoustic Gibson J-50 guitar on a cold flight of steps on the ‘Another Monday’ (1967) sleeve. This was around the time Jansch and Renbourn were flat-sharing and conspiring together, opening the ‘Horseshoe Club’ in Tottenham Court Road, Bert recalling to ‘Q’ how ‘the ‘Les Cousins Club’ was down the road, where people like Paul Simon and Al Stewart went, but we wanted something a bit more experimental’ (May 1991). Their Pentangling grew out of that intention.

Whereas Danny Thompson – who amongst us does NOT know and respect his cv? If only from touring with Donovan and John Martyn, or backing up Tim Buckley for his Queen Elizabeth Hall ‘Live In London 1968’ LP, even before you get to his multiple other virtuoso jazz and Folk incarnations. Adding Charlie Mingus to Pentangle’’s already extensive repertoire resources. An awesome figure. And we know jazz-blues drummer Terry Cox as part of the Michael Garrick Quartet before playing alongside Thompson in Alexis Korner’s Blues Incorporated, replacing Charlie Watts in the drum-chair. With Jacqui, as Pentangle’s fifth instrument. Her recording debut was dueting with Renbourn on three tracks on his second album ‘Another Monday’, including the ragtimey “Nobody’s Fault But Mine”.

Next up, their “Lyke-Wake Dirge” is done in a chilling wrap-around of eerie harmonies, as it was when I heard the Watersons doing it unaccompanied even earlier at the ‘Blue Bell’ club, or the Young Tradition’s skeletal arrangement from their 1965 debut album. Its deep roots are supposedly pre-Christian, but overlaid and adapted to chronicle the starkly austere journey of the soul after death, through the ‘fire and fleet and candle-ligte’ of purgatory until ‘Christe receive thy saule’. In much the same way, there are many variations of the Child-ballad “The Daemon Lover” before Pentangle retool it into the dark narrative “House Carpenter” unfolding on stage this night. Variously done by Joan Baez, Ewan MacColl, Buffy Sainte-Marie and Peter Bellamy to name but several, but that’s the way traditional music operates, by adaptation and reinterpretation. Jacqui’s soprano weaves with icicle clarity in alternating verses with Jansch’s less polished voice. Telling a chastening tale designed to enforce marital fidelity, warning of a wayward wife seduced away from her solidly reliable carpenter husband and baby son by a charming lover who turns out to be the Devil in Disguise. He sails her away to eternal damnation in the island of Hades.

Then, many years later, Kristin Hersh seems suitably surprised when I tell her that “The Cuckoo” – a track on her solo album ‘Hips And Makers’ (1994), had been done decades before by Pentangle on ‘Basket Of Light’. Bert Jansch learned this ‘Somerset’ song from his neighbour’s children, contrasting the perceived fidelity of the cuckoo with yet another false lover, ‘the meeting was a pleasure, though the parting was a woe’. To Kristin it was a traditional Appalachian Folk-ballad. But that’s the way traditional music operates. In Hull it dances and flies, guitar interplay underpinned by resonant double-bass, its lilting melodic trajectory renewed. A flame passed on.

This initial phase of Pentangle cut five albums between 1968 and 1971, with – for the most part, Jansch and Renbourn playing acoustic guitars directly into the studio microphones, although a muted electric guitar was introduced for ‘Cruel Sister’ (1970). Jansch also adds banjo to “House Carpenter”, while Renbourn plays sitar on “Once I Had A Sweetheart”. They switch up from the cult Transatlantic stable to join the more mainstream Reprise in time for ‘Solomon’ Seal’ (1972), but that would be their final album, until the reformations and reunions began some time later. Meanwhile, despite the flaws and failings of acoustic technology Pentangle live is a mesmerising experience. 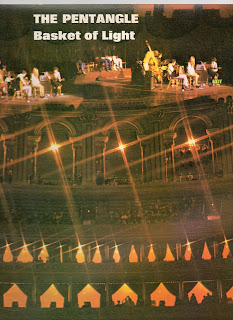 PENTANGLE: THE
‘BASKET OF LIGHT’ SINGLES

“Once I Had A Sweetheart” c/w “I Saw An Angel” (Transatlantic Big T 124) ‘Record Mirror’ said ‘there is a quiet air of confidence about this traditional and nicely-revived number. Exquisitely sung by Jacqui McShee, it has both charm and feel to it and there is no disputing the group’s tremendous pull in concert. It could miss out, of course, because it is a rather specialist sound, but it’s very good. Flip: Change of pace and style. CHART POSSIBILITY.’ ‘New Musical Express’ said ‘An absolutely stunning little record that cannot be faulted in any department. A traditional folk song arranged by the multi-talented group, the backing is unobtrusive but inventive behind Jacquee McShee’s (sic) oh-so-beautiful vocals. Towards the end the instrumentalists take over and intensify use of sitar and tribal drum rhythms. If I had my way this would be no.1. Available in stereo, though I received only mono for reviewing.’

“Light Flight” c/w “Cold Mountain” (Big T 128) ‘Melody Maker’ said ‘quite a lively performance, compared to their normal concert appearance. A bit of the old jazz and folk mixture, it sounds rather BBC2. Nice though.’ While ‘New Musical Express’ said ‘this is the theme from BBC-TV’ forthcoming drama series ‘Take Three Girls’, written by the Pentangle itself. A fascinating disc, typical of the group’s highly individual concept of contemporary music. The girl lead singer is supported by contrapuntal harmonies and strumming acoustic guitars, and the deft fusion of old and new ideas makes it sound like a jazz-influenced madrigal. One for the connoisseur.’
Posted by Andrew Darlington at 11:31

Did you think about exchanging with the #1 Bitcoin exchange company - YoBit.

Are you tired of looking for bitcoin faucets?
Double your claiming speed with this advanced BITCOIN FAUCET ROTATOR.

If you are trying to buy bitcoins online, Paxful is the best source for bitcoins as it allows buying bitcoins by 100's of different payment methods, such as MoneyGram, Western Union, PayPal, Credit Cards and even exchanging your gift cards for bitcoins.