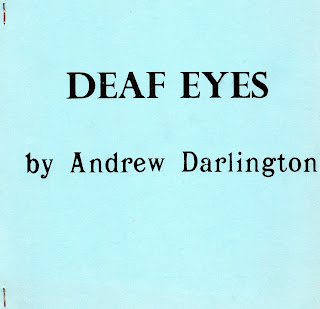 dawn cross-hatches sheets with cancer
you raise your antlered eyelids and
speak to me through bronze keyholes
as we empty our pockets in frozen ritual,
seventeen insects crawl within my stomach
seventy-four ashtrays scream in silent agony,
you raise your vacuum lips from the pubic fire
of my grateful thighs where you’ve spent the night
the world ceases to exist
beyond our field of perception,
you climb the austere liquid watches
somewhere beyond the monastic emptiness
of vision until canopus defies uranus
across a street clogged with
the silt of unattached retinas,
eventually, unseen conversation
extinguishes itself in
a spill of coins… 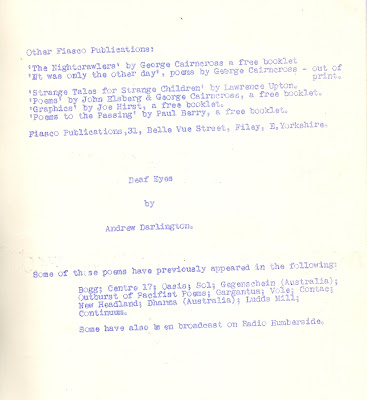 ‘Deaf Eyes’ was my first collection. As someone else said, if I had to write my first collection again, this probably wouldn’t be it. George Cairncross, publisher of ‘Bogg’ invited me to contribute to his ‘Free For Postage’ booklet series issued through his Fiasco Press on spirit-duplicator technology. He’d already produced ‘Strange Tales For Strange Children’ by Lawrence Upton, ‘Poems To The Passing’ by Paul Berry, a collection of Joe Hirst’s cheekily entertaining ‘Graphics’, as well as a couple of his own irreverently anarchic writing – ‘The Nightcrawlers’ and ‘It Was Only The Other Day’.

It was April 1973. I drew together eighteen pieces, the earliest “Variations On An Enigma” had already appeared in a magazine called ‘Viewpoints’ and sets the tone in that it name-checks Max Ernst. Other poems reference Paul Éluard and Andre Breton. Maybe that’s pretentious, a defensive-compensatory striving to assert art-credentials over lived experience, but it’s also very much what I was preoccupied with. It was discovering Dada, through editions of ‘The Penrose Annual’ in the Hull College Of Technology library (now Humberside University) that destabilized my psyche like napalm, and gave me the tools of technique to aspire towards. The next “Night Of The Crystal Dream” was from a collection-series produced by the Peace Pledge Union, called ‘Outburst Of Pacifist Poems’. I was a fellow-traveler, and went along to their Hull meetings, talking revolution and Communism. Although the poem was written under the influence of watching Fellini’s movie version on Petronius’ ‘Satyricon’ that was circulating with a subversive frisson at the time.

I was balancing and grounding such input by reading and drawing images from pulp SF magazines and comics, and consciously using them in the cut-up way described by William Burroughs and Brion Gysin. So that occasional typing errors – ‘twenty-first story breaths of the eternal ask/’, which sound good, stay in. The oblique ‘/’ indicates where the text-cut occurs. I can’t remember where I first read Burroughs, but I’d certainly gleaned ideas by reading about him in ‘It: International Times’ and ‘New Words’. The other nudge was Bob Dylan, where images such as ‘ancient empty streets too dead for dreaming’ not only use multi-adjectives, in an Allen Ginsberg way, but build a beautiful nonsense beyond strictly literal interpretation. ‘Deaf Eyes’ is a modest fumbling step that I use as a measure to indicate how much I’ve got more capable at shaping words since. As a debut, if I had to write it again, I probably wouldn’t. There’s a lot I no longer recognize about this very-intense screwed-up writer. Is it any good? Does it mean anything now? Some of it makes me wince. But this is it. And this is how it came about.

on the other side of the door
there’s the silver plain where
shaven-headed monks dance
their strange rituals
to fallen gods,
shuffling slow dust
with sandaled feet,
every once and then
the light fluctuates
throwing their shadows
into crosses of umbra
and penumbra impaled
across the sand…

while, in the mirror, the lovers
walk congealing streets beneath
the tortured city, to pledge,
with intricate precision, 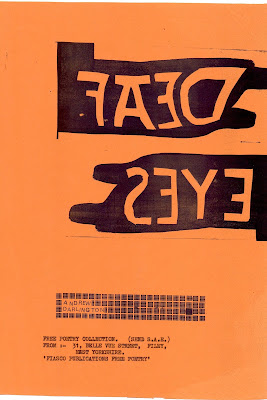 Posted by Andrew Darlington at 17:45

Get professional trading signals sent to your cell phone daily.

Follow our trades NOW and gain up to 270% per day.