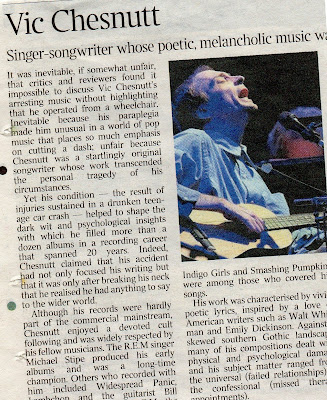 Gig Review of:
VIC CHESNUTT
at the City Varieties, Leeds
At the merchandising stand they’re investigating his CD, arguing whether his name is hyphenated, as in VIC CHESNUTT-DRUNK. Or if he’s VIC CHESNUTT. And The album is ‘DRUNK’. Both sound equally unlikely, even when he explains it. The next album – he says, is already in his past. But in our future. ‘I don’t quite know how that works out’ he adds quizzically, ‘I ain’t no physicist’. It’s the kind of nutty Einsteinian relativism he specialises in. Vic Chesnutt splices Leonard Cohen’s DNA with that of The Singing Postman. Loudon Wainwright III with a cracked John Lee Hooker… on wheels! I first glimpse him being manhandled cursing up the theatre’s backstage stairs. The City Varieties’ narrow spiral interstices were never designed for performers in wheelchairs.
Later, he opens his set with the wheezing growl of a song called “Lillian Gish”, dedicated to ‘a beautiful bohemian human being’ (a continuity with “Isadora Duncan” maybe, on his debut CD ‘Little’ in 1990), then he goes into “Supernatural” – an out-of-the-body experience he relates on ‘Drunk’, pausing only to hack out a sputum-rich volcanic cough, complaining ‘I’ve got a snot in my throat’. Vic Chesnutt demands a certain amount of audience indulgence. He sits in a pool of light. A lantern suspended from the mike-stand. He wears a Robin Hood hat, and seems to be inventing his songs as they freewheel. Or at the very least, his songs are mythologising the latest Bar-room gossip. A sprawling Bukowski Beat and Beat-Up poet in a low-life juke-joint. ‘He’s in love with his dog’ one song confides, ‘he hates his life, and he hates his wife, but he loves his dog’. It’s a great story, malevolently slurred.
Vic Chesnutt derives from Athens, Georgia, and inevitably comes with testimonials from the likes of Michael Stipe and Kristin Hersh. Without such recommendations he could be an amusingly quirky turn at your local Folk Club or Fringe Festival. Or the Busker in the pedestrian precinct you pause to watch with a wry grin between shopping at Our Price or Waterstones. His songs are cryptic confessionals. Midway, he hesitates. ‘I’m going out on a limb here. It might be good. But I doubt it’. Then, after an uncalculated pause, ‘am I dying up here, or what?’ Then he’s croaking a song with dialogue like the bitching repartee from a low-rent movie, “I Saw Your Daddy The Other Day (Now I Know Where You Get It From)”. He closes his show with frail and oddly breathless whistling. The audience is still confused. But they investigate the CD with new interest. Yes, it’s called ‘Drunk’ (1993). It’s on the Texas Hotel label. No TXHO 22-2. And – as unlikely as it seems, it’s located in the present.
In memory of Vic Chesnutt,
12 November 1964 – 25 December 2009
Posted by Andrew Darlington at 14:20