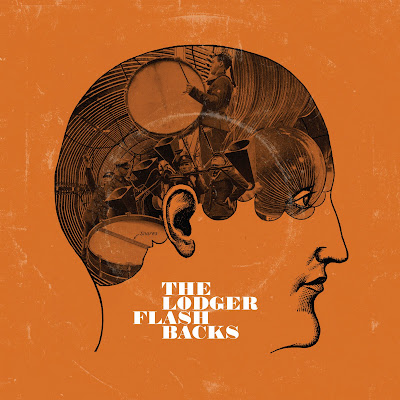 'FLASHBACKS'
by THE LODGER
(This Is Fake DIY records)
www.myspace.com/thelodgerleeds
Lodger. If you thought David Bowie, you’d be wrong. To anyone who’s ever frequented Leeds’ Brudenell Social Club or The Faversham, Lodger are endearingly ragged fey white-boys in sensible haircuts and thrift-store shirts. With Ben Siddall as the engagingly uncontrived focus, and the bands only continuity. He’s the wispy insubstantial lead voice of ‘Grown-Ups’ (2007) and ‘Life Is Sweet’ (2008), the kind of accessible voice you know you’ve heard somewhere before, but just can’t place. ‘Flashbacks’ is his first with a four-piece nucleus, expanded with various cohorts and co-conspirators, and the band’s first for This Is Fake DIY records. This time there are also strings, nice sax horn-lines, trumpet and violin solos. The structured big-production title track opens mildly, with outbreaks of mellowness, before blossoming into big choruses punctuated by Bruce Renshaw’s martial drums. There’s rippling jangle-guitar to ‘The End Of The Affair’ with smart lyrics about ‘squeeze my hand, till it cuts off the circulation in my arm’, enveloped in a balm of harmonies, accelerating into choppy rhythmic changes. These are songs of careless bedsit partings, ‘lust at the back of the bus’ that still touch all the usual bases, Stone Roses, Farm, Weddo’s, Housemartins, Postcard Records, but with some serious jiggery-pokery in the instro-mix, and Sarah’s attractive ba-ba-ba harmonies on ‘Time To Wait’ adding flurries of Yorkshire honey. The bright ‘Stand Up’ tail-ends into tasty jazzy break-ups. It’s widescreen wimp-Indie, impossible to dislike. Tunes that not so much lodge in your head, as shimmer there. Sometimes spindly, always informal, the artful Lodger is what they created Indie to be.
Posted by Andrew Darlington at 10:29