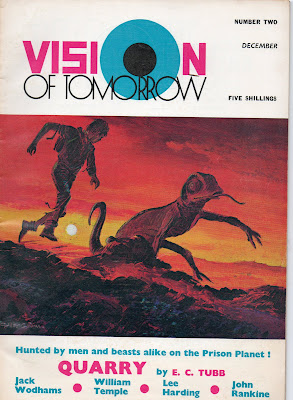 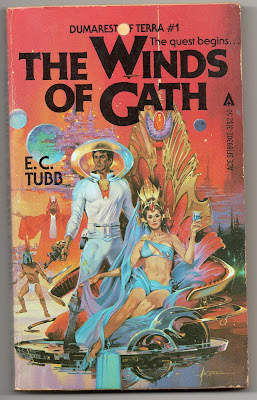 Your ‘Earl Dumarest of Terra’ novel-series sold very well in the USA. The ‘Dumarest’ novels did. They’ve been a great friend to me – old ‘Dumarest’. My saviour you might say, literally my saviour. That’s another thing. For ‘Ace’ – for the first eight books they ran to 50,000 words. I’d already done no.9 – then ‘Ace’ goes over to somebody else (‘DAW’). And they want 60,000 words. ‘Mayenne’ was the story. So we have to put in more words. How do I put in 10,000 extra words? They go in the middle of it actually! That was another stretching exercise! But ‘Dumarest’ books went on and on… until, eventually they dried up. They continued going in France. They reprinted the whole run in France. Plus novel no.31. Novel no.32 was written and a contract was signed. But whether 32 will ever see the light of day in an English publication is something else, I don’t know. I’d like to see it (in fact ‘Dumarest Saga no.32: The Return’ was eventually published by Gryphon Books - ISBN 0-936071-83-4). And I’ve since hoped that someone would reprint them – all the ‘Earl Dumarest’ books, in a thicker format. I don’t know what it was with the ‘Dumarest’ books – perhaps they were too thin? That’s another possibility, the era of the thick book began creeping in. People buy by size. And these were all done on 60,000-word length, like I say, 50,000 originally. But they could all be put together. Several of them were written as sequels to each other. There’s one that’s really a triple, there are two that are triples. So they could make a nice thick book. Omnibus editions. A bloody good thick book too, because I’d revise it – I’d put some more in and take some out. A nice 120,000-worder with bags of action in. But no.
The ‘Dumarest’ series must stand as one of the longest-ever SF novel-cycles. I don’t know. I don’t know about the ‘Perry Rhodan’ series, you see. They came out. You see, the trouble with the ‘Dumarest’ one is, I was only producing two novels a year. If I’d done three a year it would have been a lot better all round. I was all set to do the same thing with my ‘Captain Kennedy’ novel-series, but they hammered that one on no.17 – or was it 16? (novel no.17 – ‘The Galactiad (The Cosmic Duel)’ was only published in Germany, in 1976). The ‘Captain Kennedy’ books were done at a rate of one-a-month. Which means you sort-of don’t have to put in so much explanation, because the reader had read the previous one only last month so he didn’t need to have… or, you only need put in a line or two. On the ‘Dumarest’ ones I had to sort-of base the things on ‘nobody may have read the previous book’, so I had to make it complete in itself…
My conversation with the ‘Tall Adventurer’ winds down, moving into related areas such as his scripting for comic-books, his tie-in novels for the ‘Space 1999’ TV series, his ‘Atilus The Gladiator’ novels set in ancient Rome, his Westerns (as Chet Lawson, among others), his Foreign Legion tales (as Jud Cary), and more… far too wide an expanse of literary terrain to be completely covered even in a feature of this length. He signs his stories in magazines I’ve brought for the purpose, and selects some rare editions from his own shelf to gift me with. He’s never less than a commanding figure. Odd to imagine now that, as a kid, I would hang on every word he wrote. And that, preparing myself for finally meeting him, re-reading those same stories, they work exactly the same kind of magic. We shake hands. And E.C. Tubb smiles, “it’s been a great shakedown…!”
INTERVIEW CONDUCTED BY ANDREW DARLINGTON
With grateful acknowledgements to Philip Harbottle and
EC Tubb for help, inspiration, and for their kind indulgences.
Posted by Andrew Darlington at 16:05

I got my first electronic cigarette kit on Vaporfi, and I recommend getting it from them.