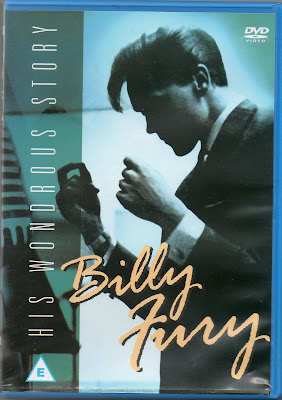 As the Pop landscape shifted and reconfigured around him, with the old star-hierarchy crashing out of visibility, Billy merely moved onto a new level of popularity. There’s a passing nod towards Mersey Beat – perhaps specifically at Billy J Kramer, in the guitar motif of “Do You Really Love Me Too (Fool’s Errand)” (no.13 in January 1964), but largely he continued in a parallel continuum, as a balladeer. There was even a new movie, ‘I’ve Gotta Horse’ (July 1965), during the filming of which he had a brief affair with co-star Amanda Barrie. But by decade’s end his worsening health, and the onset of yet more extreme Rock fashions, eclipsed him out of visibility. Plagued by chronic ill-health since an attack of childhood rheumatic fever had left him with weak heart valves, a situation complicated by tax problems inherited from his earlier career-mismanagement, he seemed as content to retreat into the semi-retirement of his farm in Wales and his passion for bird-watching, as he ever had been assuming the guise of ‘Billy Fury’ and being a star. Like the Who he’d never scored a no.1, but with a run of 281-weeks with some twenty charting titles, he didn’t really need one. And there were to be sporadic reappearances – a cameo in the ‘That’ll Be The Day’ (April 1973) movie in which – as ‘Stormy Tempest’, he virtually re-played his earlier self. Bringing it all a kind of full-circle. There was the first of a series of big-selling hits-compilations in 1983, followed by a sixty-three-track ‘40th Anniversary Anthology’ 2CD (Deram 844-874-2) set in 1998. What might have been more appropriate would have been a new album of his own songs? But whatever potential he’d once had as a songwriter, had long since passed. In memory, the Billy Fury story must be told in monochrome. He may have guested on the launch edition of the Mod extravaganza ‘Ready Steady Go’, but he performs the high drama of his hits, collar turned up, shoulders hunched inwards concentrating the energy, most perfectly against the elaborate sets of ‘Thank Your Lucky Stars’, introduced by the precise enunciation of Brian Mathews. As such, he was seldom bettered.
Posted by Andrew Darlington at 14:19