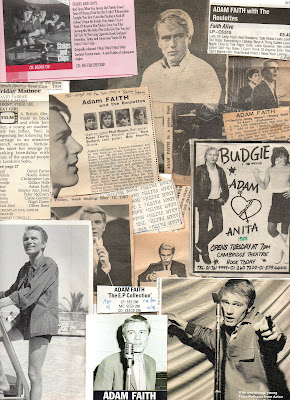 ‘COS IT’S THE FIRST TIME,
I’VE FELT THIS WAY…’:
ADAM FAITH & THE ROULETTES

Adam Faith was one of Britain’s pioneer Rock stars.
Then, when the Merseybeat explosion of 1963 threatened the
established pantheon of Pop, he was smart enough to enjoy
a brief second career by fronting his own Beat Group – the
Roulettes. During the long hot Summer of 1963 they played the
Bridlington ‘Winter Gardens’ Theatre together… and I was there…

The ‘Winter Gardens’ was located a little way north of the Bridlington town centre along the High Street. After opening in 1928, at various times it operated as a cinema and dancehall as well as a theatre for live shows. The summer season for 1963 was a family variety show called ‘It’s A Grand Night’, opening 24th June. We went… as a family. Adam Faith had been around awhile before his big breakthrough. He’d worked with The Worried Men Skiffle Group, done the ‘Drumbeat’ Pop show and issued a series of flop singles. It was only once he was enhanced by John Barry’s pizzicato strings that he exploded onto the Pop scene with “What Do You Want”, “Someone Else’s Baby” and “Poor Me”, hits characterised by his curiously accented phrasing which enunciated the lyrics ‘vat do you vant if you don’t vant mony’. Could it be he was foreign. No. He was Terry Nelhams from Acton in London. His voice was an essentially weak instrument with limited range, but whoever said you needed vocal strength to be a Pop star? Character is more important, and in that respect, he more than compensated.


After that first year of hits, spanning 1960, a little momentum was lost. He toured, did TV, had hits that simmered rather than dominated, and while he remained a star in the Pop galaxy, it seemed his shelf-life was diminishing. By all the logics of show-biz the sudden unprecedented uproar of the Beatles, followed by the deluge of northern beat groups should have confirmed his decline, as it did for so many others. Certainly his first few releases of 1963 seemed to indicate as much – “What Now” got no higher than no.31 in January while “Walkin’ Tall” did slightly better by stalling just outside the twenty at no.23 in July. Yet everything was to change, and it changed around the time I was sitting there in the ‘Winter Gardens’ auditorium watching the summer show. With the contrivance of his powerful manager, Eve Taylor, Adam had recruited his own beat group back-up. They did separate sets, then closed the show together. From Hertforshire the Roulettes were a smartly suited four-piece with all the essential attributes of the new thing. Lead guitarist Russ Ballard wore dark glasses and played a big red guitar, Pete Salt and John Rodgers carried – respectively, their rhythm and bass guitars at chest-high, like Lennon or Gerry Marsden did. Rob Henrit played drums. And collectively, they rocked. Adam’s solo set was well-stocked with hits. He had plenty to draw on, catchy Pop, done show-biz light. Personable, radiating smiles, he sat on the edge of the stage, his legs dangling, to sing “Lonesome” to the front row, investing the slight song with considerable intimacy. He’d always never quite fitted into the brylcreme-slick bouffant template of the pin-up mag Teenage Idols anyway, his blonde hair was combed into a French college-boy fringe long before the Beatles rocked the world by doing the same. And he’d featured in an early British beatnik movie called ‘Beat Girl’ which is now something of a cult curio. The Roulettes set displayed their easy mastery of group dynamics and close harmonies. Even my mother was impressed, ‘they’re just like the groups you see on TV’.

As the summer season ended the partnership’s debut single was unleashed, and – written by Chris Andrews, “The First Time” c/w “So Long Baby” returned Adam to the Top Five and gave the Roulettes their first taste of chart success. Did they perform it the night I was there? Memory tells me yes. They were using the live opportunity to rehearse and test out audience reactions to their joint venture. So it seems highly likely they did. I certainly bought the single soon after. The crashing guitars, the Roulettes raucous interrogation – ‘is it love, that you feel?’, Adam protesting ‘I don’t know-oh-wow, ‘cos it’s the first time, I’ve felt this way’. His thin quavering vocals punched out by their more muscular back-up, provided a reinvention of his career. It proved to be the first of a further run of hits to carry Adam Faith safely through 1964, extending his Pop relevance sufficiently to subsequently launch him into new ventures. “We Are In Love” c/w “Made For Me” in December 1963, “If He Tells You” c/w “Talk To Me” in March, and “I Love Being In Love With You” c/w “It’s Alright” in May – the ‘B’-side bizarrely providing them with their only American hit, caught up in the frenzy of the English Invasion it reached a US no.31 in February 1965.

Chris Andrews later went on to write hits for Sandie Shaw, and launch his own Pop celebrity with “Yesterday Man”. While the Roulettes swiftly spun-off their own recording career as early as 1963 with “Soon You’ll Be Leaving Me” c/w “Tell Tale Tit”, and although they followed it with covers of the Miracles “Tracks Of My Tears” and Marvin Gaye’s “Stubborn Kind Of Fellow” the breakthrough hit never happened. Although their punningly-titled album ‘Stake & Chips’ (Parlophone, October 1965) is now highly sought-after by retro collectors, and despite their October 1965 single “The Long Cigarette” c/w “Junk” being heavily air-played on the pirate radio stations, and still working pretty impressively. Bassist John Rodgers died in an autowreck in 1964, but Russ Ballard and Pete Salt went on to work with the recording back-up to Unit 4+2, and toured with later incarnations of the hit-making group… before joining Rod Argent and Chris White as part of the highly-rated 1970’s prog-Rock group Argent. The ‘Winter Gardens’ is no longer there. It was made over into the ‘Leisure World’ water-park. But yes, in balance, the time Adam Faith & The Roulettes played Bridlington was ‘A Grand Night’. 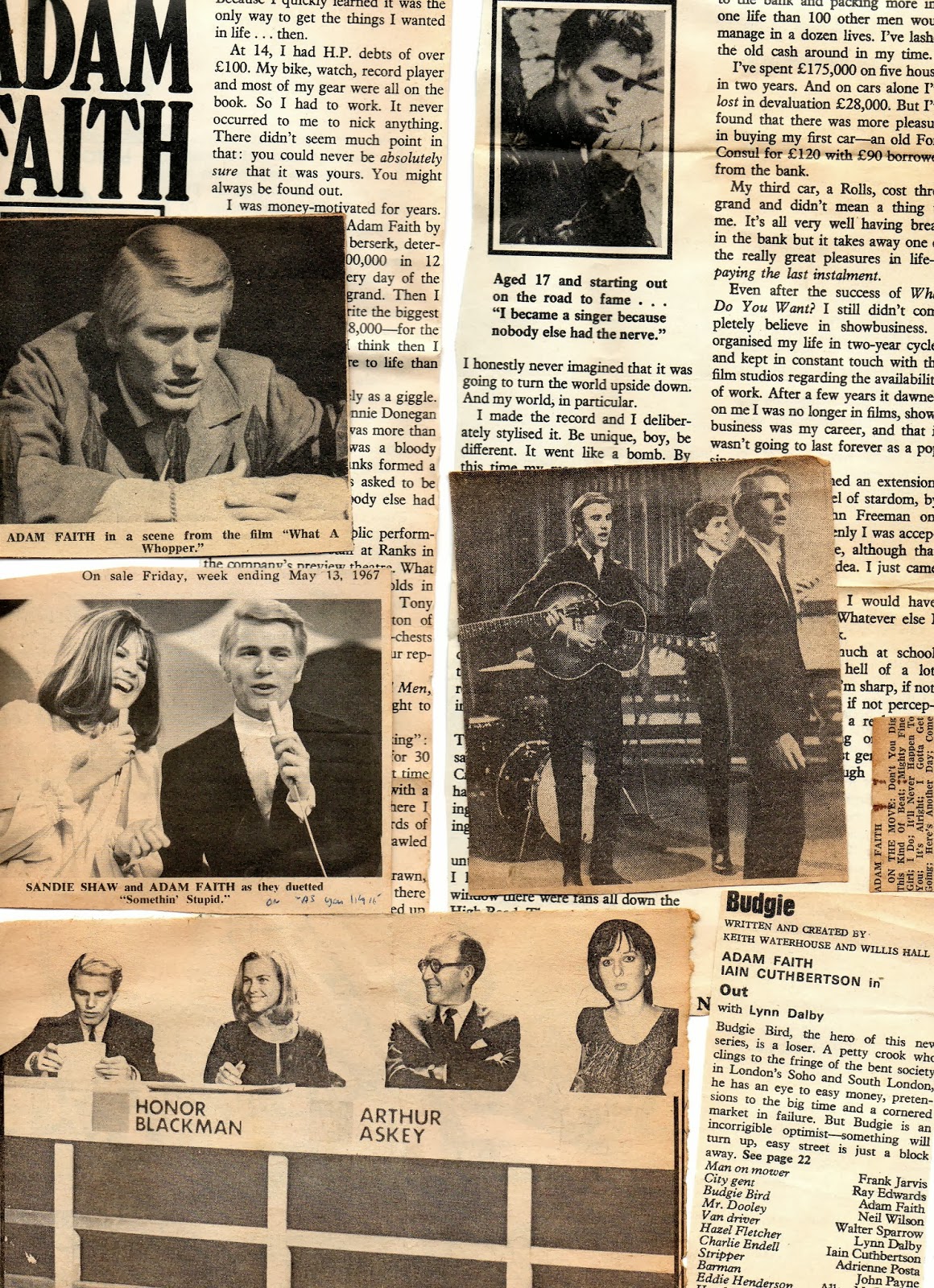 Posted by Andrew Darlington at 21:30

It was Bob Henrit who went with Russ to be the plus 2 and not Pete Salt. I've never known where the name Salt came from either although I have seen it several times. I've always known him as Pete Thorpe. Apart from that good piece that should evoke memories for many people who saw Adam and the Roulettes at that time. I saw them in Derby when they topped the bill The Roulettes opened the second half and Adam closed the show. The first half had been closed to a muted reception by the Searchers who sounded positively second rate amateurs. Their drummer dropped his drumsticks a couple of times but the second half of the show was first rate.

I was there at Winter Gardens in 1963 summer(July) as well.Adam and Roulettes played The First Time ,just before it was released and ended it slightly differently than the record,with a high vocal ending.Also Adam sand Settle Down while sitting on a stool surrounded by the Roulettes ,that song appeared on the Roulettes lp Stake and Chips.Also Pete Salt was not his name,it was and is Pet Thorp(e)the e is in doubt.
Ronniejpollock

apologies for above spelling,should read Adam sang Settle Down and Pete Thorp(e)..as per IIkcam I have read the name Salt on Lp covers etc but that is wrong
Adam also performed Lonesome that night and did that while walking along front row of theatre singing to the girls in front row...The Roulettes played Theme from a Summer Place on their Vox Ac30 amps and other amps..plus Gibson guitars I think I recall.
The show changed every two weeks a little I recall as I went twice to see them all...great stuff indeed.

I was a young boy when Adam Faith appeared at the Winter Gardens, Bridlington. My family were on holiday there at the time, and my big sister and I hung around outside the stage door waiting for him to arrive. We were a group of about a dozen. I was the only boy.

He arrived in a green Jaguar. Unshaven, and wearing cuban heals for extra height. There was quite a bit of pushing and shoving for autographs, whilst someone circulated postcard sized "Mix Me A Person" flyers. As a small boy it was hard to get to the front of the pack.

But the next thing I knew, the stage door had shut behind me and me and Adam Faith were stood in the theatre's passageway alone. He looked down at me, or more accurately across at me. (He wasn't that tall):

"What do you want curly?" He asked, in that familiar accent.

"Can I have your autograph please Adam?" I stammered.

He of course obliged, and I rapidly made my way back outside, calming my childhood nerves.

I also got the Roulettes autographs that day, which included Rod Argent who later found fame as a rock star with "Hold Your Head Up".

A nice memory. I regard Adam Faith as second only to Billy Fury from those pre-Beatles days. Here's a pic of the autograph. I keep it in my Adam Faith CDs.