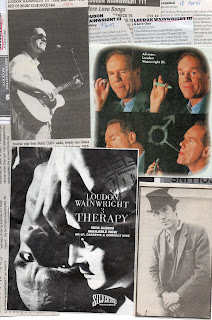 I read all the right critics. Through a process of assimilation I’m able to determine what’s current and politically acceptable (i.e. what sells), in a variety of areas including film, art, books, anarcho-syndicalism, and contemporary music (i.e. any music that allows you, for the price of a haircut, to belong to a group of people who think alike and consider themselves the one true stylists of genuine hip). The problem is that Loudon Wainwright III totally confounds that whole logic. By rights he shouldn’t even be here, alive, on this stage, never mind doing a two-hour solo set and coming back for two encores. Anyone who sings about dropping acid and listening to the Grateful Dead has got to be terminally brain-damaged, right? Not coming on with more lethal irony and cynical wit than a truckload of early Elvis Costello albums. So I ditch all accepted credibility standards, and just enjoy.

He comes on more ‘Beat’ than Tom Waits, leather flat ‘at, attempted beard, ludicrously striped soccer jersey and $20 shoes he claims he bought off a dead pimp in Austin, Texas. He hobo-grimaces and guns clear through the entire Lexicon of sex, illustrations provided by a hugely lewd and lasciviously lolling tongue. His humour is finely tuned, his guitar tuned only ‘close enough for Folk’. And I ain’t laughed so much since the last Tory Party Political.

“(IDTTYWLM) I Don’t Think That Your Wife Likes Me” (from ‘Fame & Wealth’, 1983) – emphasised by gun-shot stage-kicks – is a killer, as is “Saturday Morning Fever”, a plea for tolerance on behalf of Elmer Fudd. “Surfin’ Queen” is a complete debauched Fifties Beach movie with Annette Funicello waxed down and used to catch that last wild wave. Then there’s that ‘Dead Skunk in the middle of the road – stinkin’’ (from ‘III’, 1972). For the most they’re masculine songs, ‘sleazy but sexy’, about boozing and women, but they touch all the bases behind that stereotype. He’s never more perceptive than when he’s at his funniest, and through that strategy he managed to observe the minutia of relationships more accurately than most tediously serious writers. The ‘sad love’ of divorce, breakdown, and separation comes through on “Call Me Mr Guilty” by avoiding sentimentality and delivering each line tipped with vicious steel toe-caps; just as in “Woke Up This Morning And Didn’t Have The Blues” the confession of loneliness and loss surfaces only through its repeated comic denial.

The Music Lounge of this spacious and imposing hostelry is jam-packed to the ceiling with hairy and grizzled people joining in the choruses of songs I’ve never heard before. But what the hell? This time I’ll give the right critics a miss and just let ‘Rudolph the Red-Nosed Wino guide my sleigh tonight’.
Posted by Andrew Darlington at 14:55

FreedomPop is the only FREE mobile phone provider.

It's been said that every bettor needs to see this,