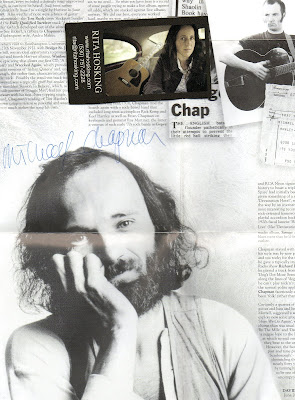 Monochrome framed photos of past-time music-greats surround the stage. Count Basie watching critically from the left, Duke Ellington from the right. Chet Baker. Art Pepper. ‘I used to come round here to get my head kicked in’ jives Michael Chapman, and he did. He opens, daringly, with a linked instrumental medley, ‘a few bits and pieces nailed together’. Daring because audiences prefer the narrative story-telling element of lyrics, and he has more tales to tell than most. But his slide-guitar fast finger-picking style reeling from blues phrasing into jaunty ragtime is mesmerising. He slurps from a pint-glass of chilled water – dangerous when sober, peers out beneath the peak of his baseball cap and goes into “Sunshine”, his beat-up voice a slurred and ragged growl, about a girl who came like the seasons and left him with ‘no song to sing’.

His delivery was always lived-in. More so now. A fascinating thing riddled with gritty character. His songs, he says, are about ‘specific events and specific places’. This one about Sylvie, an overnight groupie encounter during his first tour ‘when dinosaurs roamed the earth and records were made of wood’, he wonders will she think of him ‘when I’m no longer there’, and how to explain this new song to his wife. ‘I have a reputation for writing deeply miserable songs’ he admits, ‘I can make Leonard Cohen sound happy’. But tonight he’s on fire. A tribute to Bert Jansch, “It Ain’t So”, open-palm slapping the strings with heel-of-hand percussion on the guitar-body, conjuring sounds never before heard my man. ‘If wishes were horses, beggars would ride’, then back to his signature theme “Fully Qualified Survivor”. To wind down with “That Time Of Night” based on a Methodist hymn, and “La Madrugada” a phrase he various translates as ‘the time all dogs are brown’ or ‘dawn’s first light’ – Google confirms the latter.

When I later remind him of seeing his earlier gigs back in the late-sixties he just grins, ‘long time, scary isn’t it?’, a plough of stars on his loose T-shirt.

Rita Hosking also tells a good tale, several in fact. A rising star of alt.country or authentic Americana, she toured here last summer, did the festival circuit, and impressed Bob Harris on his Radio 2 show. Opening with “I’m Going Home” its raw-harmonica adds a melancholy ‘with bad times came the man’ country edge. Growing up on remote Hatchet Mountain, NE California with ‘sap on my elbow, a scrape on my knee’ her songs catch something of the great expansive pastoral of lost frontiers. When she sings “Indian Giver” about her Native American mother it clicks into place and you think yes, something of Buffy St Marie, dark hair scraped back over her ears to swoosh in a cascade down her neck, over purple roll-neck top and skinny blue-jeans. But uniquely Rita too, as a trad-acapella “Moonshiner” proves, then a ‘silly song’ written as an exercise in beating writer’s block, using washing-up dishes as a neat metaphor for passing time and the fragility of relationships. If she writes this well with a block it’s scary to conjecture what she does without! And sure, “She’s Waiting”, an autobiographical glimpse back to a little girl living in a house haunted by a grieving friendly ghost hits all manner of immaculate targets, her almost-piercing voice ascending to supernatural near-shrill heights. “Crash And Burn” about Demolition Derby, “Kitchen Table And Chair” about her family’s escape from forest fire-storm, and “I Ride An Old Pain” which she contributed to an Austin, Texas compilation album all add fresh colour to the tale.

Then Michael Chapman joins her on-stage, his rippling Martin-guitar adding depth to her “Ballad For The Gulf Of Mexico” for the blue-collar shrimper victims of last year’s eco-disaster oil-spill. I swear even Count Basie and Duke Ellington, watching from monochrome framed photos around the stage, are smiling their approval.

It's been said that every bettor must watch this,