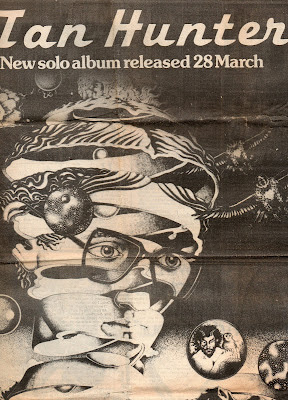 ‘C’Mon, you weren’t fuckin’ BORN then, gimmie a break!’ hollers a leery Ian Hunter after ramming raw Chuck Berry runs through his three-minute Road Movie “Once Bitten Twice Shy”. Then he shifts into that other Rock ‘n’ role, the ‘it’s way past my bedtime, I’m old and sick’ ravaged tired-and-emotional Star routine. Tonight, it’s still a mighty long way down Rock ‘n’ Roll for the ‘All American Alien Boy’. But although he’s here with a frazzled bubble-perm and aviator wrap-around shades intact, from all those awkward Glam ‘Top Of The Pops’ shows, he’s also jacked up on lime-green baseball boots that seem to put new spring in his set. For while he plugs direct into the ten-pin connection of 1970’s Mott the Hoople, he alternates vintage hits with fresher incendiaries from recent solo material...

But first – presentationally challenged, Sarajevo are a Stoke Newington five-piece neolithic metal relic. Perhaps there IS a good argument for the UN strategic bombing of THIS Sarajevo. They open with “Twenty-One Gun Salute” interposed with quotes from the ‘Dam Busters March’. Then they flail whiplash hair and solid Black Sabbath riffs into “Standing On The Edge Of The World”, before scoring some approving smirks by stomping all over Abba’s “S.O.S.”. Their unfortunate appellation – ‘like calling a band ‘Hiroshima’’ gags promoter John Keenan, is actually one they’ve been using for some five years, and refers to the Bosnian city’s part in igniting World War I, a history lesson in atrocity they punch home with their “Remembrance Day”.

Paul and Elaine, meanwhile – have come all the way down from Newcastle especially for tonight, enthusing ‘Mott the Hoople were the first gig we ever saw. 1973 it was. Queen were playing support’. Overhearing our conversation Dave and Cathy politely interrupt to explain how they’ve come clear across the M62 from Liverpool for this gig. He wears a well-faded Mott tour T-shirt that must date from 1975. Their expectations are not disappointed. Ian Hunter’s natural home is the stage, even when – as here, he’s backed up by the largely Swedish group he’s used for a series of recent Euro dates. And while they can Rock, he’s also paired up with New York guitarist Rocky Scott-Bird, a Keef on flexible bean-pole legs who indulges in all that matey Faces mike-sharing and grinning Laddish camaraderie as they boogie through “Central Park And West” then a feisty “Roll Away The Stone”.

Hunter’s voice rips and tears at the lyrics with ragged exaggerations and pronunciations, but then it always did. And he’s never less than a Rock ‘n’ Roll myth-maker, battered by an intrepid courting of toxic danger and nicotine-stained death that etches the authenticity into “The Golden Age Of Rock ‘n’ Roll” and “Just Another Night On The Other Side”. “Bastard” comes fizzing with echo-electro washes, while “Cleveland Rocks” extends indefinitely with Mr ‘Unter co-ordinating sections of audience sing-along – ‘someone’s saying ‘Bolton Rocks’!’ he complains mock-petulantly, ‘give me a fuckin’ break!!’ But the highlight is when he strips it all back into an aching “Michael Picasso”, a new song written for the late Mick Ronson, ‘somewhere in the mist, a long long time ago, people used to stare at the Spider with the platinum hair...’ closing it with ‘to know-know-know him, was to love-love-love him’. You can razor the stillness. Finally “All The Way From Memphis” rambles inexorably into an anthemic “All The Young Dudes”. ‘My name is Ian Hunter, and this is my Fuckin’ life’ he hollers, ‘don’t forget me and I won’t forget you’. This night, it’s both a plea, and a pledge.
Posted by Andrew Darlington at 18:41

There is shocking news in the sports betting world.

It has been said that any bettor needs to see this,