CD: 'THE GENESIS OF SLADE' 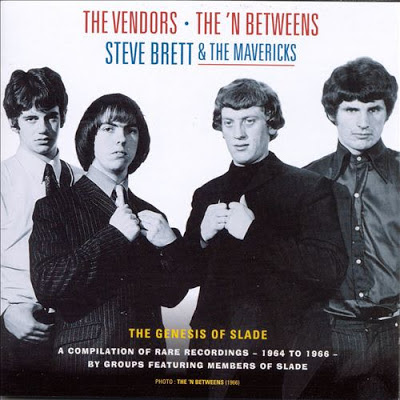 There are few bands so essentially matched to their time-frame as Slade are to the tacky glam ‘n’ glitter stomp of the 1970’s. Yet, as this album, and as Noddy’s autobiography ‘Who’s Crazee Now?’ (Ebury Press 1999) shows, the various elements of the band were lurking on the outer fringes of Pop-dom throughout the sixties waiting for the big break that never came. Some of these tracks are lifted directly from carefully hoarded fans’ vinyl, and bear the ‘unobtrusive’ surface-hiss and scratch-noises of authenticity. Other tracks never even got that far, and are salvaged intact from a never-released lost cassette. So pristine sound quality is not an issue here.

Archaeological speaking, the earliest examples date back as far as 1963/64, with the quaint period charm of a privately-pressed EP by the Vendors – a name derived from an instrumental hit of the time called “Peanut Vendor”, and used by youth-club Beat-Boomers Don Powell, guitarist Dave Hill – and vocalist John Howells, who is now Jurassically resurrected to provide the sleeve-notes. They harmonise on Buddy Holly’s “Take Your Time”, write their own “Don’t Leave Me Now” (Hill and Howells), and do a note-perfect cover of the Shadows’ “Peace Pipe”. Meanwhile, as Noddy recalls in his memoirs, his school-age band the Memphis Cut-Outs were recruited by Steve Brett, already ‘a well-known entertainer in the Midlands’, as his new ‘Mavericks’, and it was in this guise that he got his initial ‘taste of the music industry’. “Wishing” was their first of three 1965 singles – all the A’s and B-sides collected here, which provide Noddy with his introduction to studio-time, albeit playing ‘exactly as we did every night on stage’. Essentially a ‘bunch of hicks from Wolverhampton’, they played Germany together with their mix of Brett’s big-voice Country ballad-cover of Elvis’ “Anything That’s Part Of You” and their failed Surf cover of Jimmy Gilmer’s American no.1 “Sugar Shack”. While “Candy” is a cheesily bounce-along Austin Powers Swinging Sixties quasi-TV-theme. Now That’s What I Call Easy Lounge-Core!

But by then Hill and Powell had graduated to become The ‘N Betweens, and tracks 12-15 are regulation Soul / R&B covers about dance-crazes with stupid names like “Can Your Monkey Do The Dog” and their take on the Yardbirds’ “I Wish You Would”, tracks lifted from a ‘cassette recording of a private acetate that has since gone missing’, plus further tracks originally put out on a French-only Barclay-label EP dismissed by Noddy as ‘just basic Blues tracks straight from their live set’ – including an inferior version of the Sorrows’ “Take A Heart”. The final six tracks come from 1966 and – although credited to The ‘N’ Betweens (Mark 2), unite the complete Slade line-up for the first time, with Noddy’s vocal debut clearly not yet at his microphone-wrecking best, but getting there. The sequence consists of one single – a flawed cover of the American Young Rascals hit “You Better Run”, plus the previously unissued out-takes they did with legendary American madman and fractured genius Kim Fowley, its ‘B’-side, “Evil Witchman” which ‘Kim made up on the spot’ around Noddy’s guitar riff, plus studio try-outs of Dave Dee Dozy Beaky Mick & Tich’s “Hold Tight”, and “Ugly Girl” – dedicated to ‘Our Fan-Club President in Afghanistan’. ‘See how beautiful her ugliness is’ Fowley voice-overs, then fades out with ‘buy our next record, it’s even groovier than this one...!’ And, of course, it was. For by the next record they were re-branded by Chas Chandler as Slade. But meanwhile, it’s sadly obvious to see why the 1960’s overlooked these naive and unfocussed attempts, and that it was only when the decade’s real innovators were either dead or creatively burned-out that Slade achieved their long-awaited moment. So this is a souvenir for hard-core fans and tacky Glam-Rock archivists only.
Posted by Andrew Darlington at 11:32