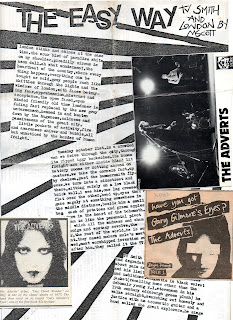 Somewhere mid-way in the original Punk pantheon,
located below the Pistols, Clash, Damned, Buzzcocks,
but above Chelsea, U.K. Subs, Eater and Penetration
there were the Adverts whose finest moment was the
defining “One Chord Wonder”, a genuine chart hit and a
manifesto of intent. Then, some years after that collectible vinyl,
frontman T.V. Smith does a solo gig in Leeds...
Tonight, Punk-Life comes through the lens of a Gig Review
of T.V. SMITH at the ‘Duchess Of York’, Leeds


I ask myself, ‘is this the end of Punk as we know it? Or the shape of the nineties to come?’ Tonight, T.V. Smith wreaks angst with ‘what if my teenage clothes, will never again fit?’ set to stark ‘three-chord-wonder’ acoustic thrash. He’s a hunched-up figure on a spasmic twitch of spindle-legs. But no, this New Age is just the New Wave stuck in the microwave for fifteen seconds, and though his teenage Adverts’ leathers no longer fit quite so stylishly, T.V. (Tim) Smith is not about to grow up gracefully. Not this night, not yet awhile.

Before him come Gobshites, a four-way street of quad-acoustic guitars and pass-around vocals. The Crosby Stills Nash & Young revival starts here and now. Then there’s Psycho-Surgeon Wild Willi Beckett with bassist Jont at their most nerve-stripping extreme, equipped with white-face white-smock and stethoscope they inflict open-heart butchery in an amped-up power-drill assault of wordy madness. After which MC Richard calls T.V. Smith ‘the finest lyricist in England’. And perhaps he’s not too wrong. Although little about tonight would fool you into thinking that this is the voice of righteous vengeance that once spread chaos and mayhem from ‘Top Of The Pops’ to the ‘Live At The Roxy’ album – and beyond, as Punk-band Adverts’ frontman. Instead he’s solo, nowhere to run, nowhere to hide. Billy Bragg comparisons come easy, but aren’t too helpful. Ignoring yells for macabre Ads-hit “Gary Gilmore’s Eyes” he opens with one-time ‘New Musical Express’ ‘Single Of The Week’ “Third Term” (3rd March 1990 issue). Ignoring shouts for Ads-hit “No Time To Be Twenty-One” he sings “Luxury In Exile”, re-tuning into “Atlantic Tunnel”. Didn’t Harry Harrison write an SF novel about that? But then again – Gary Gilmore’s eye-transplant Horror-show was surely cyberpunk before its time, and T.V.’s “Atlantic Tunnel” is a huge churning spitting ‘Desolation Row’ of sinister simile and grievous metaphorical harm with lines about ‘smashing through the bedrock and culture shock’ in a high full-frontal whine, then rhyming ‘dinosaurs, with ‘on ocean floors’ in a moment of manic inspiration...

The end of Punk as we know it? Hardly, but instead – there’s continuity. Conceding that ‘one way or another, you’re defeating your ideals’ he yet emerges with politics intact. “Can’t Pay, Won’t Pay” leads into an over-prescription of Legal Drugs (in “Ship In A Bottle”) and an essay on teenage homelessness (“Gather Your Things And Go”), while – if the excellent near-hit “Tomahawk Cruise” waded into the Belgrano Falklands mess, his “Newshounds” does the same for the first Gulf War. Old Waves and New Ages merge and microwave into each other. Who needs teenage clothes with a set as confrontational as this? T.V. Smith – ‘THIS IS NOT AN EXERCISE: THIS IS REAL! Perhaps this should have been the shape of the Nineties?
Posted by Andrew Darlington at 11:01

I have just downloaded iStripper, and now I enjoy having the sexiest virtual strippers stripping on my taskbar.

If you need your ex-girlfriend or ex-boyfriend to come crawling back to you on their knees (even if they're dating somebody else now) you must watch this video
right away...