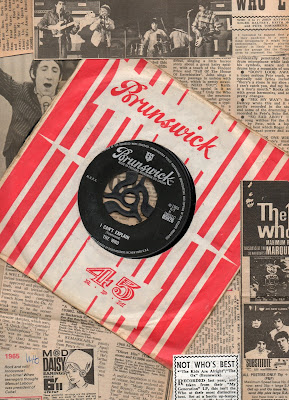 A QUICK ONE…
WITH THE WHO

THE WHO at The Hull
University Students Union
(4 December 1967)

I swear this is the way it happens. Ask him now, Daltrey will probably deny it. But I was there, and every word is true. The Students Union building sits in amongst the manicured lawns of the Hull University, Cottingham Road campus. Not a big venue, as venues go. But the student circuit is key to promoting new albums. Exposure to the sharp young decision-makers you need onside if you’re to elevate from the casual Pop-fiend followers of a quirky little singles band into the serious album thing. And the Who have ‘A Quick One’ to market. But it’s not quite working out that way.

There’s a disturbance from the start. Opener “I Can’t Explain” is a jarring earful of volume that shudders and vibrates in piercing jabs of over-amplified Stratocaster stabs. Short. Sharp. Staccato. Incendiary. In the uncanny hush that descends after its lurching juddering close there’s a cluster of guys at the back of the standing crowd who start into yelling and laughing. I mean, who pays the ticket price if all you’re going to do it harass and catcall the group? Unless it’s some kind of ‘hey, look at me’ thing. The Who go into “Substitute” and “Pictures Of Lily” but the irritation gets increasingly obvious. The yelled insults, taunts and laughter getting louder and more obnoxious.

So Daltrey sorts the situation. Hung on the mike-stand he peers out into the audience, searching out the offender. Then delves into his back pocket to produce a fist-fold of folding money. ‘OK, don’t spoil this for other people’ he appeals reasonably, ‘if you don’t like what we’re doing, fine, come up here, come on stage, I’ll give you your money back, I’ll refund your ticket-price, OK?’ Eyes are on the provocateur. Less than a moment’s hesitation. The guy starts up towards the stage, the crowd parting to form a path for him. He’s swaggering. The centre of attention. Which is the intention. He shifts right to the short climb of steps up onto the stage, jumping them two at a time. Now he’s on stage. Moving towards the centre where Daltrey steps forward to meet him. Wide grin, left hand extended with the offered notes. Yes, it’s working out. Daltrey is not a big guy. But in one swift vicious arc his right hand balls into a fist and lashes out perfectly targeted, WHAP, the blow to the face takes him by surprise. The heckler lurches back, stunned, keels back over the stage-edge into an accidental audience-dive.

In the blitzed silence that follows Pete promptly strikes up the frantic intro play-in to “Run Run Run”, and they pick up as though nothing has happened. I swear this is true. Although ask him now, Daltrey would probably deny it. Meantime, listen to the Who’s compressed hyper-charged energies. When it comes to aggression, attack, vehemence, violence and arrogant hatred there’s nothing that Punk ever did that the Who hadn’t done first. They harbour a grudge against the world, retaliating though a series of angry abrasive going-for-the jugular singles. And they did it on acceleration. The ‘My Generation’ album (December 1965) encompasses their entire All Mod Cons covers-and-anthems phase. It’s all there, impacted into those twelve revelationary spasms. The upfront Brunswick-label singles – “I Can’t Explain”, “Anyway, Anyhow, Anywhere” and the distorted feedback of “My Generation”, form an immaculately bratty trinity. Shel Talmy’s other client-group – the Kinks, had a head start. The Who have urgent time to make up. No time to waste.

Of all the sixties groups – and there were plenty, the Who had the greatest interdependent synergy. As in the hydra-headed advert-art for “Happy Jack” – four long-necked heads on one body, each member is as vital as each other. Still in jacket and Mod-preened hair, Roger Daltrey is a bruiser with attitude, the perfect front-man vocalist. His voice a muscular half-shouting onslaught, equally adept at leading half-tricksy sun-kissed harmonies. But although he’d later try various other projects with varying degrees of success, without Townshend’s writing he’s merely a voice-for-hire. Townshend is a damaged personality who casts as many darkly-violent shadows as he produces blinding flashes of brilliance. He contributes solo vocal bits on stage and sings occasional tracks on LP’s, while the later albums issued under his own name are not without their moments, but his writing needs Daltrey’s bombast and projection to give them their life. Keith Moon was never going to be content just to sit behind his drum-kit to the rear on the stage, his enthusiasms bring surf-harmonies into the Who, and his explosive seriously-deranged stage-presence makes him a vital visual group component. His ferocious drum-style intimidatingly upfront yet never less that appropriately precise. While the solid deep-throat low-slung bass-lines pouring from ‘The Ox’, either in cahoots with Keith as rhythm section, or providing separate song-feed through the likes of “Boris The Spider”, makes it impossible to imagine the Who without John Entwhistle. 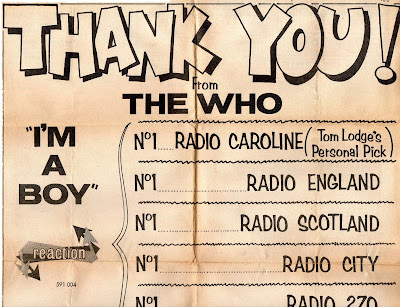 Some recent writers have sampled their well-thumbed ‘Guinness Book Of Hit Singles’, noted that two subsequent Who 45rpms – “A Legal Matter” and “The Kids Are Alright” only reached no.32 (in March 1966) and no.41 (September 1966) respectively, and misguidedly assume this indicates loss of traction. Not so. By then they’d jumped labels. Brunswick belatedly lift those singles off the album to milk their cashflow. Everybody who wants those tracks, already has them. And by album two – ‘A Quick One’ (December 1966) they’ve already lurched on, striving into an entirely new phase. “Substitute” (‘I look bloody young but I’m just backdated’) and “Happy Jack” take a lyrical shift into a novel weirdness unlike anything else in Rock, before or since. Odes to oddity in their every twisted couplet. Transmuting the pure adrenalin gone before into a furious set of contradictions where north is south, black is white and lies are fact. “Pictures Of Lily” is about masturbation, and for anyone who missed the point, Keith plasters his kit with vintage pin-up porn. While whatever the hell the percussive “Happy Jack” is about is still anyone’s guess. But it works, like fish-hooks barbing the inner lining of the cranium, they refuse to work loose. Hits pinging, flying and scoring like shiny balls in a pinball machine. The harmonies tighter, smoother, the subversion more crafted. And despite hyperbole, it is subversion. Subverting and reinventing what a Pop 45rpm can do, testing its limits. Distorting it into new configurations, but still charting into the Top Ten.

This night they find space to do “Summertime Blues”, indicating the roots of teen insurrection, the viral link between Eddie Cochran and Sid Vicious. With John doing the deep-voice ‘No dice son, you gotta work late’ insert. Just as their “Shakin’ All Over” provides the bridge between Johnny Kidd’s pioneering Brit-Rock and Guess Who’s US Top Tenner (as done on the Who’s ‘Live At Leeds’?). While “Young Man’s Blues” (also done live at Leeds) has all the full-on power and attack that Led Zeppelin will later claim. Although the album deliberately spreads writer-credits across the four, with Entwhistle’s creepy-crawly “Boris The Spider” as solidly unsettling as anything by Pete, and Keith’s manic soundtrack “Cobwebs And Strange” a long-term stand-out weirdy, it’s still integrated around Townshend’s damaged cerebral SatNav tuned into the moons of bedlam.

Next up, “A Quick One, While He’s Away” might be a clumsy unwieldy concoction of unlikely bits welded together into a muddled 9:10-minute sequence. It’s ambition greater than the six-linked sum of its ability. But, although we can’t know it at the time, the seeds of ‘Tommy’ and ‘Quadrophenia’ are here. It’s a fumbled try-out for what’s to come. The tale of infidelity with a letchy old perv as archly comic as it is ludicrously absurd. A Girl Guide ‘fornicates’ with a Music-Hall caricature-villain. Entwhistle sings the clip-clop clip-clop ‘my name is Ivor, I’m an engine driver’. ‘Randy old bastard’ yells Keith. ‘Social Comment’ deadpans Pete. But this night Townshend, in particular, uses its repetitive ‘you are forgiven, you are forgiven’ redemption climax as a message targeting the unruly audience-elements, reaching out and pointing, the arc he’s indicating draws us all into that reconciling forgiveness. Maybe, just maybe, these kids are alright after all?

Vindicated, they close with an extended “My Generation”, Roger whirling the mike around his head, so it smashes into the cymbals riding atop Keith’s kit in a spray of sparks, as Moon detonates speed-fusillades bam-bam-bam rat-atat-tat with truly scary physical intensity. It’s not just solid walls of volume – but that too, interspersed by rippling light and shellshock shade, an intimidating noise-density from just three players, provoking shrieks of feedback-protest from the speakers. It’s more. Helen Shapiro made her 1961 ‘gonna be my own adviser, ‘cos my mind’s my own’ manifesto. The Who razor it down to the incoherent stutter ‘why don’t you all f-f-f-fade away?’ Cliff Richard did the 1962 ‘’cos we may not be the Young Ones very long’. The Who razor it down to the iconic ‘hope I die before I get old’.

I swear this is the way it happened. They’d played Hull before, in 16 June 1966. But the next time they play Hull it will be the bigger-capacity ‘City Hall’. And the Who will continue after Keith Moon. They will continue after John Entwhistle. In fact, they’re still performing as The Who. And I guess they have every moral right to do so. But to me, The Who ended the day Keith Moon died. 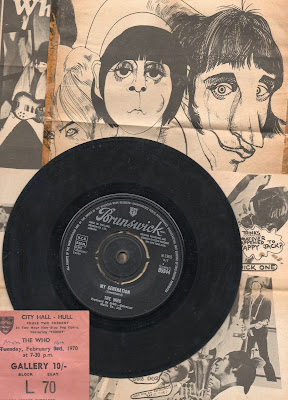 Posted by Andrew Darlington at 13:58

Searching for the Best Dating Website? Join to find your perfect match.

Order a professional Sparkling White Smiles Custom Teeth Whitening System online and get BIG DISCOUNTS!
* Up to 10 shades whiter in days!
* Results Guaranteed.
* As good as your dentist.
* Same as dentists use.