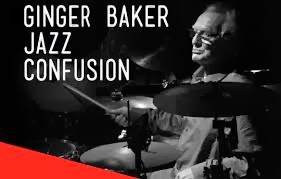 ‘I’m getting too old for this lark’ wheezes Ginger Baker. ‘No you’re not’ yells an audience voice. It’s the one time this night his stern visage cracks into a smile. His autobiography is on Amazon with a free-read section. In it, he explains how his pre-Rock roots lie in Bebop-drummer Max Roach and British jazzer Phil Seaman. How he’d nick jazz albums from local record shops. That’s before he joined Graham Bond, hooked up with Jack Bruce, went on into Cream and all the other stuff we know. Here in Leeds he’s spun it all back to where it began.

Openers Quack Quack are a powered-up Prog-improv Nice-style trio. Midpoint into a piece that might have been called “Phonehenge” or “Bird Parliament” Richard ‘Moz’ Morris, who runs a three-minute mile while playing keyboard, sets a single continuous drone-note, then joins drummer Neil Turpin in a furious percussive fusillade, while Stuart Bannister crouches against the amps coaxing controlled distortion from his tortured bass. Their ‘Slow As An Eyeball’ CD sells briskly at the merchandising desk where promoter John Keenan presides.

Ginger Baker. He might look like the kind of lag who once ran with the Krays and now sells his story to sleazy tabloids, his once-flaming hair now an ice-grey slickback, but his music-soul burns. Drums are the core of Jazz Confusion. Ginger in specs and open-neck shirt, and to his right, his Ghanaian percussionist right-hand man Abass Dodoo who alternates sticks with palms on congas in a unison drum clinic of startling intensity. Michael, dapper bassist in pork pie hat is fluent stand-in, depping for Alec Dankworth. And a seated Alfred ‘Pee Wee’ Ellis, former James Brown/Van Morrison saxist, his sweet-toned tenor expressively delineating Wayne Shorter’s “Footprints”. As fleshed as Ginger is fleshless, after solos Pee Wee sits, gazes inquisitively down into the audience, and breathes.

A buzz of distortion provokes a withering ‘thank you soundman. DON’T do it again!’ in Ginger’s whiplash wheeze. The second of two half-hour sets, after a twenty-minute break, opens with the second Pee Wee original. Then Ron Miles “Ginger Spice” – ‘he’d never heard of the Spice Girls’ rasps Ginger, his shirt off now. It’s been part of his set at least since the 1999 trio ‘Coward Of The County’ album, with busy drum dialogue and Pee Wee igniting oozing groans and sighs from his horn. There’s Thelonius Monk, and Sonny Rollins “St Thomas”, but the finest moment is Ginger’s own tribute to “Cyril Davies” with eloquently narrative sax underpinned by steady time-signature, emotive, but with swing. Ginger Baker throws a drumstick in the air. Catches it. But when he stands, he almost stumbles. Too old? Not yet! 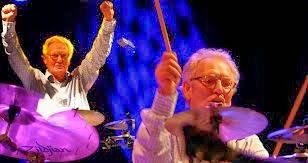 Posted by Andrew Darlington at 11:31

There is a chance you are eligible for a complimentary $1,000 Amazon Gift Card.