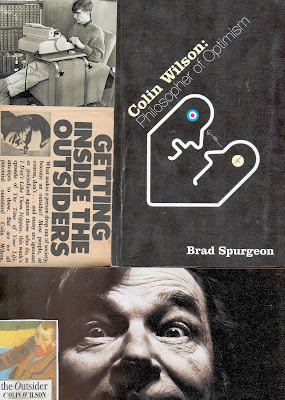 ‘COLIN WILSON: FURTHER
BEYOND THE OUTSIDER…’

Colin Wilson can be an infuriating writer. Largely because he provokes questions, and people don’t like the awkward inconvenience of having to re-examine their most basic assumptions. He stands marginalised outside most every academic discipline, free-ranging through every imaginable variety of literature and dubious sub-lit genres – which, to some, makes his authority in any one of these subjects suspect. From UFO’s to the mainstream SF that resulted in the vampiric ‘Lifeforce’ (1985) movie, from serious enquiry into occult phenomena, to the nature of slasher crime, from the motivation of serial killers, to the persistent myths of Atlantis and para-Egyptology. He almost purposefully exposes himself to accusations of fringe-weirdness, while retaining a nimbus of nagging doubt that just possibly, he’s onto something…

A working-class self-taught writer he stumbled into overnight fame – as part of the 1950’s ‘Angry Young Men’ explosion, with ‘The Outsider’ (1956), a highly-readable crash-course in significant modern writers which made his readers familiar with their names and ideas without the tedious necessity of actually having to read them all. But then probably reading them anyway – which is how many first encountered Herman Hesse, Albert Camus, Mervyn Peake, Proust, Kafka… or Nietzsche. It’s still in print, renewing its appeal with every new generation, which might have something to do with its enticing subtext equation for bed-sit hermits that runs ‘great thinkers are social misfits, I’m a social misfit, therefore I must be a great thinker’. When Wilson’s subsequent books failed to achieve the same level of recognition, he simply accelerated his production to a book-a-year schedule, which ensured his name remained visible. A working writer with an overdraft, who periodically returned to his philosophical base-themes, the questions of ‘Being &Nothingness’. 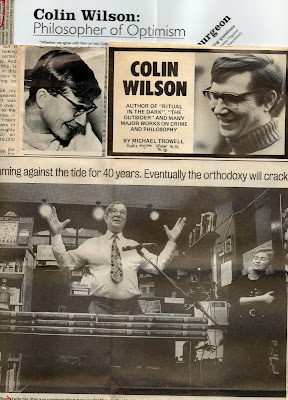 His own absurdly premature autobiography (not 2004’s ‘Dreaming To Some Purpose’, the one before that) charts the course of his philosophical evolution through ‘peak-moments’ such as his ‘St Neots margin’ revelation. Into the dubiously right-wing implications of his elitist dominant minority intellectual early-adopters theme. ‘What I wanted to do was to try to create a philosophy upon a completely new foundation’ he asserts with breath-taking insouciance. Perhaps, as L Ron Hubbard discovered with Scientology, the most efficacious way to create a movement and recruit disciples is to pretend you’ve founded a religion? Basing your argument on reason is inherently bound to limit your prospective audience. Yet he does throw up questions which have you re-examining your own beliefs, or lack of belief. Even as he comes out with mind-boggling statements like ‘I could see that there was a basic fallacy in Sartre and Camus and Heidegger’, and goes on to correct their misapprehensions. This, from the man who wrote ‘The Spider World’ series (‘The Tower’ 1987, ‘The Delta’ 1987, ‘The Magician’ 1992, ‘Shadowland’ 2003, ‘Spider World’ – ‘that’s probably my masterpiece’ he claims)!

The modern ennui he specifically targets is existentialism’s thesis that life has no quantifiable meaning or purpose. Its conclusion that life is random and essentially pointless. People find this depressing. But surely – meaninglessness is only troubling if you’ve been brought up to expect meaning? ‘Meaning’ in the old devalued religious sense of the word. Freedom can be frightening. Amorality can be unsettling. And there’s the curious enigma that at a time of the greatest material wealth and security in history the incidence of depression and pharmaceutical dependency has never been higher. Even if it’s only the old glass half-full/half-empty perspective. But this is exactly in line with what Wilson was writing about decades ago, ‘the hierarchy of need’ – as lower needs are satisfied, higher needs become more pronounced. The need for meaning and purpose in an age when both political and religious utopias are seen as flawed. The necessity of building a humanistic rationale based on reason.

This book is largely composed of an extended series of interviews with Colin Wilson at his home on the Cornish coast, to coincide with his seventy-fifth birthday (in June 2006), conducted by American journalist Brad Spurgeon. Spurgeon opens by describing how he first discovered Wilson’s work, through writing a novel with a supernatural theme – ‘a subject I knew nothing about’, and was directed towards Wilson’s authoritative ‘The Occult: A History’ (1971) by way of research. He’d known of the writer by reputation but ‘I had never read any of his books, though I had always been meaning to.’ Hardly a promising opening. Then Brad waffles and apologises for not having read the fiction. Fortunately Wilson himself talks as fluently as he writes, and needs little prompting to expound every detail of his instant cure to the malaise of meaning. But has this infuriating writer succeeded in his mission? ‘Oh, I think I’ve succeeded totally’ he concedes with absolute conviction. ‘What I’m saying hasn’t been understood yet. But there’s plenty of time. I’ll be dead for a long time…’