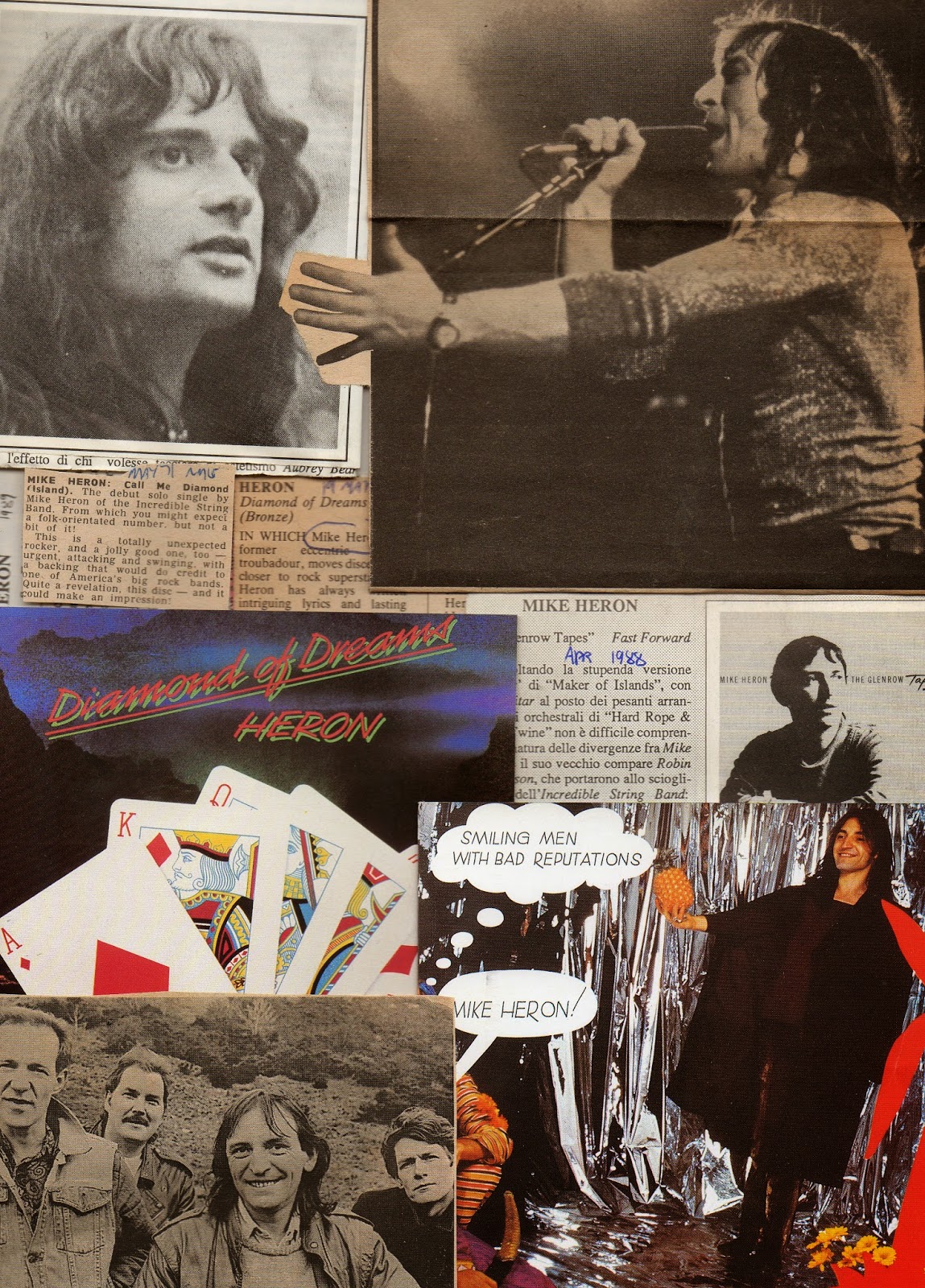 The Incredible String Band were one of the Hippie era’s most quirky
icons of cosmic oddness. For one night in Leeds original member
Mike Heron returns to irradiate ‘some bright sunshine in darkest night…’

‘He’s hard to talk to’ grumbles the doorman, ‘y’know what I mean’ – meaningfully, ‘an acid casualty.’

Some of my best friends are acid casualties. I won’t hear a word against them. Then we start into some stupid free-associating. He says Jimmy Nail acquired his aka when he stepped on a nail. One wonders what his name would have become had he stepped in dog-crap instead? And what did Mike Heron step on – a large graceful wading bird with a pointed bill? Perhaps that’s an appropriate image. I tell him how I first spoke to Heron on the ‘phone. And far from ‘difficult’, he was fine, articulate, amusing. But it was a bad-line, as if bounced off the satellites of Saturn. There was a dog barking. Might have been his or mine, but it filled in Telecom’s sound-level drop-outs and the holes in the drifting static haze. Marking interviews out of ten, it would probably score a two purely on lack of clarity. Tonight will be better.

But first, Mike asks us to imagine it’s the 15th July 1975. A Soyuz and Apollo spacecraft are launched from their respective continents within hours of each other. Two days later they dock and crew-members shake hands in space watched by a world-linked TV audience. Together, American and Russian look down on the breath-catching swirl of planet beneath them. First they look for their own cities of origin. Their nations. Then they see only Earth. ‘Stargazing at Earth’ sings Mike Heron, ‘what could divide us?’

The song is “Tom And Alexi”. The third one he does this night as part of his new temporary acoustic quirky quartet. There’s inevitable elements of the cosmic. After all, Mike was one half of psychedelia’s most esoterically revered icons of oddity, two partners-in-rhyme called The Incredible String Band. But peel back ‘5000 Spirits And The Layers Of The Onion’ and this Heron is no more out of time than any other of today’s Crusty New Agers. And shouts for sixties album tracks get an amused ‘you overestimate my memory.’ The songs remain unsung. Mike Heron is all sharp-nosed grin and ears protruding through hazy fringes of hair. Coils of cloud dance in the spotlight beams. Is that dry ice or dope smoke? – and who cares? ‘We start slow and get better’ says Mike Heron in face-splitting smiles, ‘it takes a little longer as you keep getting a little older.’

The evening opens with Paul Buckley, a blues singer strung out on a unique styling of Sam Cooke’s “Chain Gang”. He plays from a sitting position. It’s that kind of relaxed event. The audience sits in neat attentive rows. Mike Heron also sits, as do his agile bass player Stuart Smith, and heavy guitarist John Rutherford. Hyperactive percussionist Dave Haswell is the only one to stand, doodling maniacally around a stunning arsenal of bongo’s and conga’s, chimes and cymbals, bells and shakers.

Performing his own songs, says Mike Heron, is like ‘smelling your own sweat.’ Yes, they’re that personal, but never so indulgent they fail to tell an absorbing tale. He does “Blackfoot Side” to tom-tom drumming – a song derived from the Sioux Indian lore of ‘Black Elk Speaks’ (a 1932 book transcribed by John G Neihardt). He does “Gaughan In The South Seas”, drawing on a book he read as a kid – Somerset Maugham’s ‘The Moon And Sixpence’, but magicks them both into hypnotic webs of intrigue. ‘I chat about the songs to draw people in, it doesn’t suit me just to stand up and yell songs at people’ he explains. Both songs are from his current ‘The Glenrow Tapes’ CD (Quadrant, 1988).

He plays a fluid and breathy harmonica, sings a song for Jack Kerouac, and does “1968” with Haswell switching to ‘hippie’ tabla percussion. This was the last Incred’s song he wrote, only recently issued as part of the ‘On Air’ (October 1991) CD of time-lost BBC session recordings. And it’s a quintessential song of wistful regret and eclipsed innocence – ‘you played your strings like they led to the truth, / sang your words like clear spring light, / let’s do it one more time, and we’ll keep the fire going, / bright sunshine in darkest night...’ The Incredible String Band were an intrepid courting of toxic myth and ganja-stained death out-leaping the limits of shock with insidiously weird seductions of sound. Tonight this high-flying Heron creates a more homely kind of Beat fun. But a wealth of fun nevertheless.

We meet up while Heron is pressing flesh après-gig. I prompt him that we recently did a phone interview. ‘Phone interview?’ he fences quizzically, ‘where was I talking from? Newcastle or Dundee?’

I know where I was talking from Mike. But I don’t know where you were.

He laughs. ‘Wait… before we start, I want to catch the bar before it closes.’

I wait.
Posted by Andrew Darlington at 19:27